You know how car heads looooove going to car shows where they look at old cars and comment on the engine and “look at those brakes” or “man I sure wish my bumpers were that shiny”?

Would it not be super neat for there to be a similar event at Champs? Which begs the question: What robots would be there? What robots have to be there*. What robots are so iconic in FRC that it would be a different sport if they hadn’t been made?

* no, not by law. Just, you know, because they’re so dang cool

This is not “what is your favorite robot.” This is “what robot changed what you thought was possible?” “what robot blew everyone’s mind,” or “what robot (mechanism) was so revolutionary that is changed how we approach the problem?”

Let’s start with the obvious: 2002 71. The game breaking robot. No one talks about strategy without talking about this robot. There are rules still in play because of this robot. Karthik does it better justice than I ever could, so go listen to him talk about it here.

Who would you suggest to be in the Hall of Old Robots of Fame?

CD7 (47’s 2002 robot) hands down. That robot has inspired so many mechanism and intake evolutions that have persisted more than a decade and a half after their season. There were teams making CD7 inspired intakes for the 2020 game. Talk about long-lived. 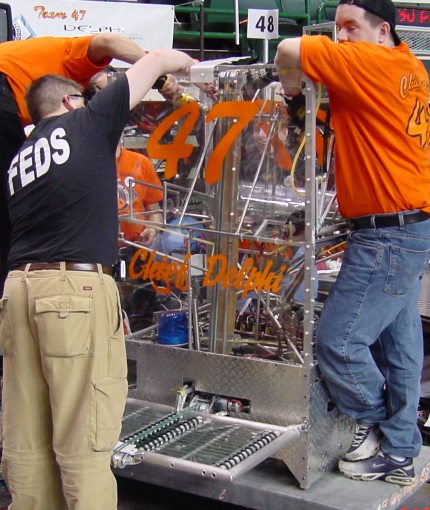 I think you should describe your choice for “robots that changed FRC” a bit better, and include exactly what about FRC they changed, for those of us less aware of the whole robot past

(In reference to 71’s robot that I know nothing about)

Arguably the most versatile robot ever. Never even needed to be improved year to year because you can’t beat perfection.

Here’s a nice video of a talk by Andy Baker: [Top 20 Robots in FIRST Robotics - YouTube].

I’d argue 2910 2018 changed the FRC landscape by showing off swerve at a high level (and causing many PNW teams to attempt it the following year), though that’s also because of the work SDS has put in to making swerve as accessible as possible

What was the first robot to do the buddy climb?
Edit: Correct me if I’m wrong but wasn’t there multiple teams that started to do buddy climbs in 2018?

Here’s maybe an odd one: 341 2012. Daisy XI continues to be one of the best examples of a simple, straightforward robot that has the ability to dominate at high levels of play. I may be slightly biased since it was my first year in FRC (and everyone will always bias towards “the greats” being the ones that influenced them the most), but it’s the earliest “MCC+”-type example that I can remember.

edit: Not to mention DaisyCV.

Depends what you consider a buddy climb. All of 2007’s climbers were buddy climbers, and I’d bet that a lot of 2018 teams were taking direct inspiration from 2007.

Team 47 - Chief Delphi really set the bar back in the day. Their 1998 robot was the first ever swerve drive in FRC and was absolutely revolutionary. They then raised the bar again in 2000 with an even more impressive swerve drive. Considering the lack of COTS parts available back then, and the limitations of the kit motors, these swerve drives were truly out of this world.

Was there a single robot that was the design inspiration for the original KOP drive? I remember the old c-channel kit, but I don’t really know where it came from.

This is a story that everyone should read: The Weak Robot Cart — JVN Blog

Were there any buddy climbs in 2010? I know there were multiple ramps and teams like 2337 who climbed and presented a bar for other robots to hook onto, but did any robot (try to) climb with another robot?

@BordomBeThyName is right about teams drawing inspiration from 2007, but those robots just helped their partners get end game point without getting the points themselves.

2012 had some robots like 1501 and 701 that supported other robots while they drove onto the platform so both robots received points. While the main point of those robots were to fit 3 robots, I could see how they could be considered buddy climbs.

Based on this metric…

I still don’t understand how it works.

They also revolutionized “The Ramp”

This is “what robot changed what you thought was possible?” “what robot blew everyone’s mind,” or “what robot (mechanism) was so revolutionary that is changed how we approach the problem?”

95’s 2002 robot, Feynman, did this. I’m not saying that because it was my team who built him, but because for literal decades after Feynman played I had people come up to me at events and say “I loved your team’s popcorn robot.”

I don’t know if he was the first robot to have a ‘faster than drive speed, full-width intake’ but he did a really good job of showing what a system like that can do with a (for those days) super fast drivetrain. 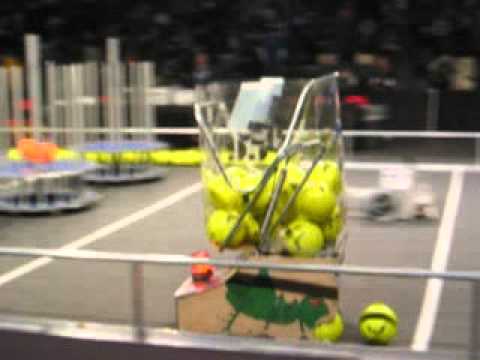 Edit: he was also a really good example of a robot that was super fun to drive and play with, but ultimately ineffectual at winning matches. Other teams could usually rip goals away from us and/or push goals out of the scoring zone with us attached.