Rookie Team - How much should we worry about weight shaving?

By far the best tip you can get is to buy a scale!

Can’t emphasize this enough. For the money, this is way better than a bathroom scale because of the remote reader. It’s also a good idea to get “calibrated weights”. Get 2, 45lb. barbell weights and find someone with a calibrated scale and record their weight. You can then calibrate your scale (know how far they’re off and do some math, mx+b right?). This is only critical if you’re one of those teams whose robot somehow always ends up at 119.8lbs.

There’s another issue and that is the official scales at the competition aren’t as calibrated as one might think. They do their best and their scale is the judge and jury. To avoid conflict the goal should be to stay 5lbs. under max so scale tolerances don’t bite you.

I’d be more convinced if you actually tested this (in a UTM or whatever). FEA can be useful, but it has some limitations that aren’t always obvious. For example, anyone who’s ever bent a piece of square tubing knows that the most common failure mode is the side walls (in the plane of the force) fold up accordion-style. This is called “columnar buckling”, and is a lot more common than “real” compressive failure. With respect to columnar buckling, the 1/8" wall is going to be MUCH stronger than the 1/16" wall. However, most FEA software (I don’t know about Solidworks specifically) looks at things in the perfect world of CAD; since there’s no lateral load on the side walls, there’s no way for the buckling to “start”. Therefore, for the compression forces on the side walls, the FEA software is probably using the compressive strength of the aluminum, when in reality the walls will buckle at much lower stress.

How high (theCoG) is it

What’s a good rule of thumb for how high your CoG is before it’s problematic? I could have sworn I heard something a long time ago about teams trying to make sure their CoG was under their bumper height, but for tall robots, that’s really difficult to hit. Is there a general rule teams typically go by here?

Our rule is to draw an equilateral triangle with the base of the triangle going between the points where your outer wheels contact the ground (ignore your drop). Your CG should be in the triangle if at all possible.

one of my favorite teams, lightening their robot at their first competition. 1717 went on to do great things… 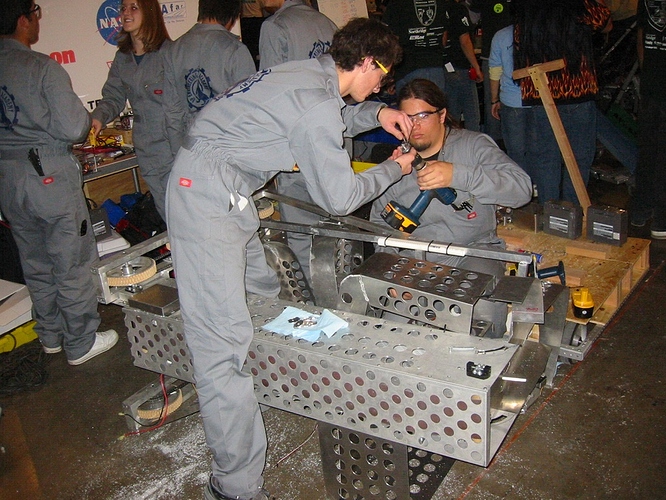 Triangles are actually going to be better, imo, strength to weight wise, because of how they can be packaged.

I’m no civil engineer, but that was my thinking as well (given how much they like to make bridges out of them). I think this front piece might even be lightened 1/16". 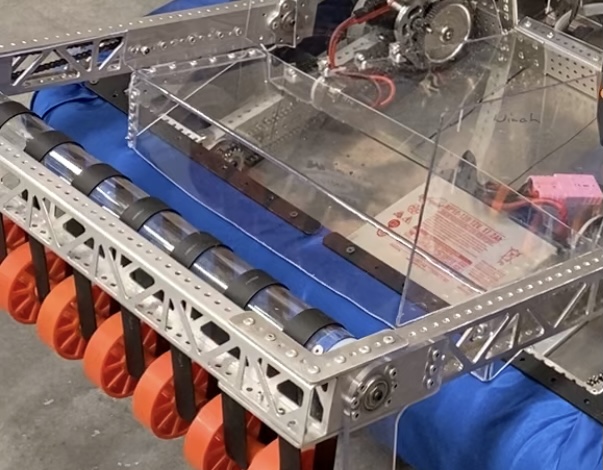 Yea, I think the bridge example is definitely really strong. I was thinking more along the lines of the reason plane windows are round. Id be interested to learn which example applies better here.

the reason plane windows are round

That’s a good point. Stress “accumulates” in corners. Like most(all?) CNC-ers, our triangles aren’t really triangles because the corners all have a radius (fillet). I presume that makes some (small?) difference.

actually maybe thats significant, because a lot of planes seem to have windows that are closer to very rounded rectangles…

The de Havilland DH.106 Comet was the world's first commercial jet airliner. Developed and manufactured by de Havilland at its Hatfield Aerodrome in Hertfordshire, United Kingdom, the Comet 1 prototype first flew in 1949. It featured an aerodynamically clean design with four de Havilland Ghost turbojet engines buried in the wing roots, a pressurised cabin, and large square windows. For the era, it offered a relatively quiet, comfortable passenger cabin and was commercially promising at its debu...


“Design and construction flaws, including improper riveting and dangerous concentrations of stress around some of the square windows, were ultimately identified.”
1 Like
JamesCH95 January 14, 2021, 7:48pm #31 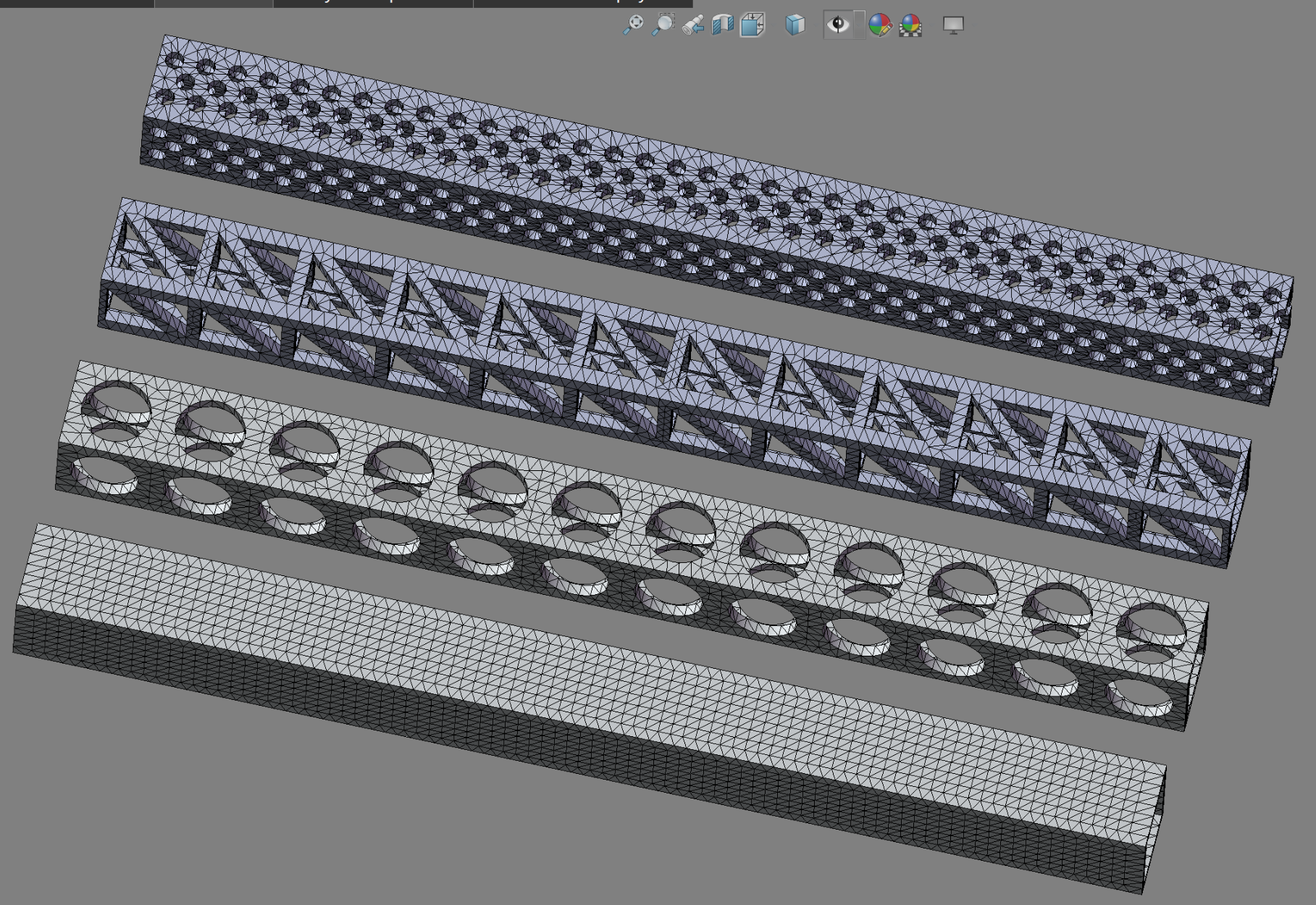 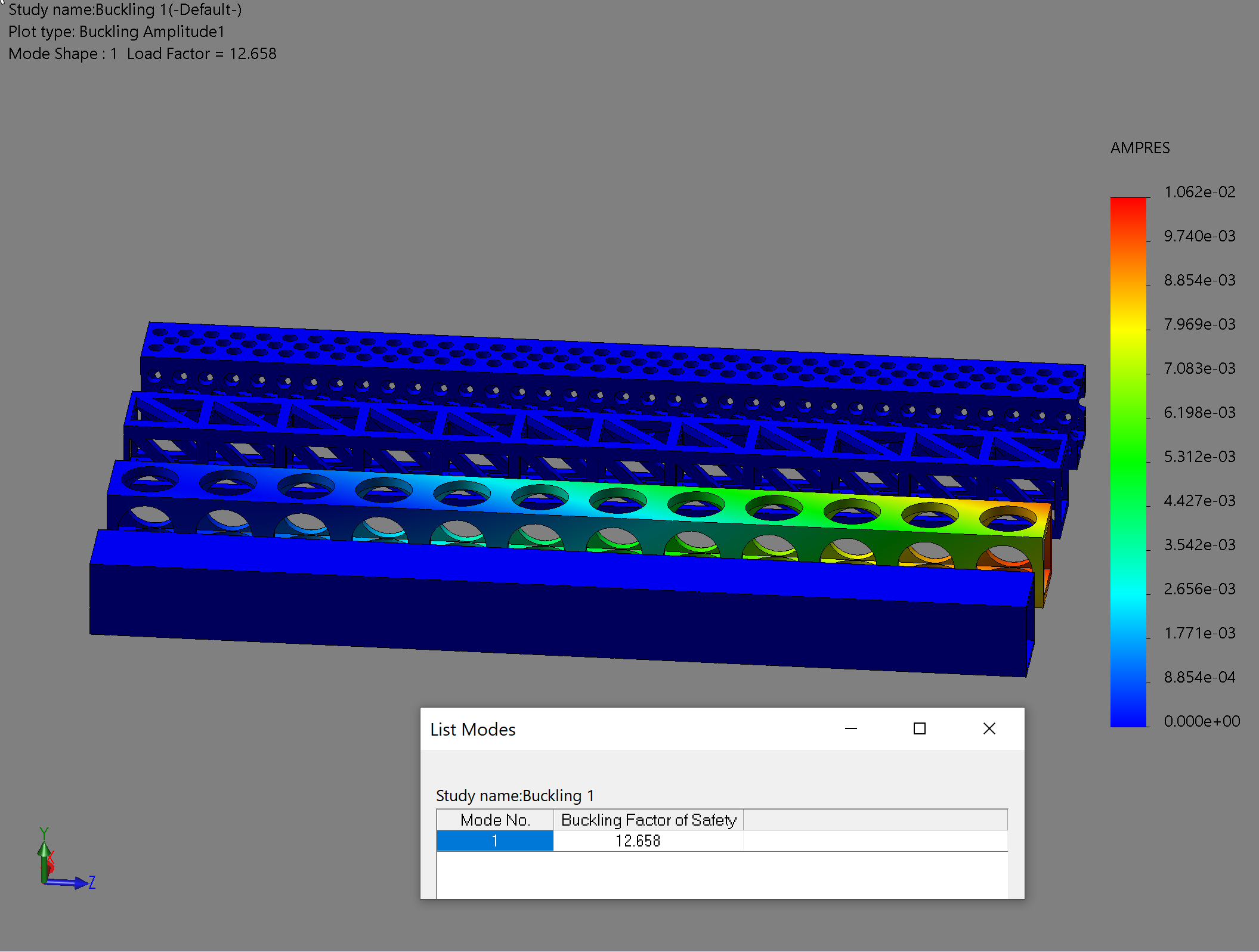 Notes:
-Weight is a unit-weight, not directly lbm or N or kg.
-Fillets on the truss model will not be captured by the mesh unless they are so large that the beam cannot meet weight. I did not want to put this on my day-job computational cluster to run a super-fine mesh, so this is what we get. The elements are too big to capture stress-concentrations anyway, so it’s a crude approximation of a ~.05-.1in fillet.
-I could not make a #9 hole pattern that match weight parity with the other three beams, but it sill is remarkably worse in stress despite a 30% weight advantage.
-Minimum buckling FoS is over 12. I’ve used the rule of thumb that if the buckling FoS is over 10 you don’t need to worry about it.

These results are pretty stark from my experience in modeling (I do many types of FEA models with experimental correlation at my day job). You could argue I’m off by 10-50% anywhere and the conclusion will still hold: reaching parity on linear density by light-weighting patterns will significantly compromise stress when compared to using thin-walled tubing.

Our first robot had steel plating and weighed max weight… We won RAS. Just saying. Able to lock down the low goal from even elite teams.

I would not worry about weight first year.

he lesson here is that you don’t need to obsess about weight, but do pay attention to it. Create a basic weight budget and pay attention.

^^ This. Do things like use aluminum rather than steel when you can, and plastic rather than aluminum when you can. When a joint is only carrying shear and compressional forces (no major forces pulling it apart), use rivets rather than threaded fasteners. Whenever you do an assembly, weigh it and check it against your weight budget. Unless you’re planning to do a lot of pushing (which is usually bad strategy), don’t be afraid to come in under weight - light robots accelerate faster than heavy ones given the same motors and gearing, and may be able to gear a bit faster than heavy ones. The most competitive robot 3946 ever built*, weighed under 50 pounds before the battery. I could fit it in the front passenger seat of my Saturn Vue, and carry it under one arm.

But the easiest way for a new to middle-tier team to keep the robot in weight happens before you design, much less build the robot! Come up with a short list of things the robot must do, and do those awesomely. This will result in a light, simple robot that kills a few tasks on reps rather than a complex robot that struggles. That robot I spoke of in the last paragraph could drive, pick up power cubes off the floor, and put them in the two lowest goals of the game. The speed largely compensated for our inability to do the high “switch”.

* We were alliance captain for the first and so far only time at the offseason Beach Bot Battle.

There’s another issue and that is the official scales at the competition aren’t as calibrated as one might think. They do their best and their scale is the judge and jury.

FIRST required us to buy the same scale they use for regionals when we started the PNW district. It is rated to be within .1lbs. We also had to purchase the calibration weights that matched the scale’s calibration procedure. The LRI/RI’s should calibrate it when setting it up and at re-check it periodically, if gets moved, knocked ect. Of course things happen but the procedure is set up to doing a good job of providing consistency.

But the easiest way for a new to middle-tier team to keep the robot in weight happens before you design, much less build the robot! Come up with a short list of things the robot must do, and do those awesomely. This will result in a light, simple robot that kills a few tasks on reps rather than a complex robot that struggles.

Thoroughly test prototypes of the mechanisms on your (short) list of things the robot must do. If you cannot make it work effectively and reliably, do not build a final version and do not install it on your robot.

An interesting point of comparison would be an 80/20 profile, as long as you’re feeling that FEA life style.

A not wholly surprising result, but important for teams, rookie and veteran alike, concerned about weight to know!