If you show up with round bumpers, and as long as they feel solid, you probably will get through just fine.

Time to trot this one out again? 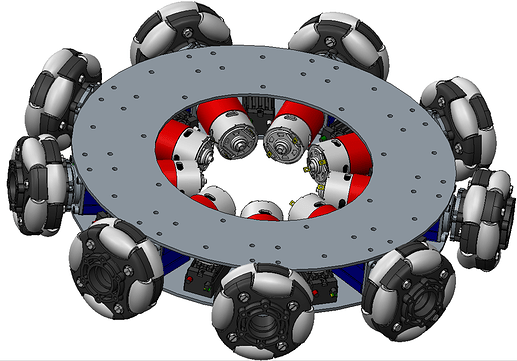 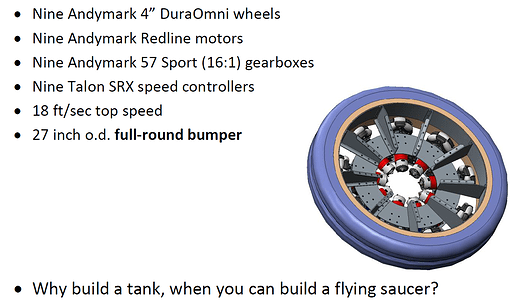 Programmers all over the world are hoping you don’t build this.
But imagine the magic smoke you could make!

Air hockey puck…and I mean it in a fun way.

Yes, I was thinking of air hockey or pinball as a theme. Could be effective at defense.

Maybe update the design to use Neos at 4:1? Can I order the bumper wood from Marky-Mark?

Did poohbear get to you?

Did poohbear get to you?

While I probably would have built a kiwi with 3 motors per wheel before this, this is still WAY above a poohbear drivetrain. Especially in large numbers, round scrubless wheels are unfathomably better than polygonal traction wheels.

Have you tried this? Seems safer and more reliable than gluing 3 pieces of wood together. Totally fits the spirit of the rules. Happy halloween!

Solid Wood Bending Machine For Closed Circles Or Worms GIF by GIFs For Everythin... by jiffiergifss

What a coincidence! This is exactly the machine we used, at least that’s my story and I’m sticking to it.

I missed this on the first go around. I don’t want to stir anyone up. I just want to say that I’m not really a robot builder, I’m a cabinet maker and luthier. I bend wood all the time and have made my own plywood on a number of occasions, including 3/4" nominal and round plywood. It’s definitely a thing, and I’d put my plywood up against any Home Depot junk any day. It would be fun to do a round bumper, if I wasn’t already so busy…

we did it cd

Time to fell a redwood tree and mill your entire round bumper from a single slice.

Legal, but that sounds like a bad day, as the easiest way to split wood is radially.

Yep we now have an official answer. Not the answer I wanted. Not what the rules used to say. Not any good reason.
And this type of rule is why I can’t volunteer as a robot inspector anymore. As annoyed as I get following crazy rules, I can. But I just can’t bring myself to enforce them.

Alright, so what about kerfing 3/4" plywood to bend it? I would argue that that technique would be much weaker for a fully-circular robot, but is it allowed? Is it still 3/4" nominal if only part of it is still actually 3/4"? It’s “sold by the vendor as that material and thickness.”

Or to be even crazier: take 3/4" plywood and mill it down to 1/4" then laminate that. It’s “sold by the vendor as that material and thickness” and since it’s already plywood you’re not really “fabricating plywood,” right?

Both of those build methods sound legal to me.

Ok, so it may be that this is no longer a viable place to return to the initial question, given how the thread went down, but …

The students in my team have developed a very solid case for a round robot this year. So I want to know if I need to shut it down immediately on the grounds it is impossible because of the bumper rules, have on the table but classify it as so far beyond any team’s abilities that it is practically impossible even if technically feasable, or keep it as a very difficult but viable option.

At this stage I know that:

So their options are:

My reading is that these are in the rules. Hopefully I’m not misreading anything.

If these are viable:

The first two options are technically possible but out. Option 3 would be best if we made it out of ply thicker than 3/4" and sanded it back to make it closer to round, but my reading of “be backed by ¾ in. (nominal) thick [plywood]” knocks out thicker as well as thinner ply. So it would work in ply, but they would need to accept that it won’t be technically round.

However, as to 4), if the team purchased lengths of pine or similar wood that was substantially thicker than 3/4", then routed them to make segments of the curve with 3/4" constant thickness, would that be against the rules - either the letter or the spirit?

https://frc-qa.firstinspires.org/qa/109 may be of great interest. I have a feeling that the answer will be “no, R24 blue box, this is clear” but I’ve been wrong before.

@Bilby, I would probably be thinking that 4 was your near-best option. (Your actual best option is probably going to be a polygon with at least 6 sides, probably closer to 8 or 9. Optional homework for your students to read Flatland included.) Caveat is that you’ll likely need to get creative with the machining.

I would also suggest asking a similar question on Q&A, but focus in on one or two specific aspects of the cutting (e.g. “Our robot design needs hardwood bumpers. If we get pieces that are thicker than 3/4” nominal, we assume that it is permissible to work them down to 3/4" by standard woodworking methods, are we correct?")

You may also want to ask about the thicker ply, as I’m sure that will come up somewhere down the line.