Is there a good POE had for the Pi B series that works for the FRC 12V passive POE like is provided by the REV POE Injector. . Something that connects to the pins behind the Ethernet port?

I think Playing With Fusion - SnakeEyes (Green) Visible Raspberry Pi HAT for FRC Robotic Vision will achieve the functionality you’re looking for, as long as having the LED’s and camera cutout is OK.

I knew about that one. I have one in my tool box that needs soldered up. I was hoping there was something else too, that would be just the adapter, a little cheaper and smaller.

Gotcha. From what I’ve poked around for when we were doing something similar in 2020, my searches were coming up empty. Lots of options on the higher-voltage POE standards, but not much at the 12v level.

Using PoE With A Raspberry Pi 3 For About Two Bucks | Hackaday was a reasonable option, just not in hat format. We’d contemplated soldering up our own to perfboard, but ultimately found it was easier just to run two cables.

I’m definitely interested if anyone has options. Seems like a reasonable market gap to fill - especially something roughly in this form factor but with the right buck-boost components to transform battery-variable voltages into nice 5V for the Pi.

We haven’t used Snakes Eyes which has a few nice features so it costs some $$$. The electrical specs are what I find highly desirable. We’ve connected reversed polarity and burned out LEDs that are now severely constrained (but no longer needed - one last season with LL lights). The 5.1 v is very attractive. 5v supplies have the RPi throwing low voltage warnings a lot although I can’t see that it had ever turned off/on and rebooted in a match.

5.1 v is available in the adjustable supplies such as Pololu has a good one but I don’t trust the settings to be stable especially while being hit in competition. I haven’t been desperate enough to be inclined to test the Pololu given my high failure rate of other cheap supplies on my work bench. They haven’t held a voltage or current through a power on/off cycle and are not stable as they warm up.

My current plan is to use something like this and go to the usb port or the gpio pins. I was just hoping there was something nicer and cleaner like a hat and a poe injector.

While we are on this subject, what are you thinking about to act as a UPS? I have seen the Pi get corrupted when power is removed and the Pi wasn’t shut down properly.

Honestly I didn’t have a UPS plan. I thought batteries other than in COTS devices weren’t allowed but I could be wrong on that. My plan was to have a backup SD with the image on it.

I am not sure if it is in Photon but the WPILIB pi has a make the card not writeable which should prevent corruption.

USB battery banks are allowed up to a certain size. Yes, one thing that can avoid corruption with hard power offs is to use the WPILibPi image, which mounts everything read only by default (except when you specifically enable write mode to eg change configuration settings).

It looks like the datasheet for the SnakeEyes includes schematics of the power supply section.

Historically in FRC the solution to low battery drop out to digital loads like the cRIO was boost to buck converters. You boost the battery voltage from whatever it is up 2 or 3 times higher. Then buck regulate off that. This way the voltage into the buck converter is not near the drop out.

We had to go to a battery for the RPi when we had a Mecanum drive one year but haven’t had any problem using a normal VRM all the other years.

Check the capacity specs of the battery vs game manual each year and each battery you buy. I’ve seen upgrades to batteries that then violated the game manual.

I had been using a different 5v regulator as the VRM is 2A and rPi 4 spec calls for 3A min. I am sure it works most of the time. The mismatch is specs tightened my shoulders up a bit.

I am not sure if it is in Photon but the WPILIB pi has a make the card not writeable which should prevent corruption.

Yeah, I think that having a boost-buck converting 12v-5v for the pi (and fan) would be the right call. Now whether you place it between the PoE & power pins, or have it between the PD/Pi is something that maybe depends on your packaging. Some sort of split PoE cable on the front end is reasonable.

I do think connecting only through the ethernet port is nice for the PhotonVision setup, and only maybe also having a usb camera from the same side.

We didn’t seem to have any dropout issues with the SnakeEyes buck converter, but it is worth keeping in mind. If you do end up using their hat, then if you have to switch to reflective targets, there is less to change, but the cost would be less going without.

It is also worth considering that if someone buys assembled & tested COTS boost & buck boards (assuming any heat sinks come with that) the price with shipping & handling can exceed the FRC SnakeEyes asking price.

If I had any reservation with powering the RPi it is that it can consume considerable power when passing power through to USB devices connected to the RPi. So there is ‘power enough’ to power the RPi, the RPi’s fan, and camera, but perhaps not enough to plug in some other USB devices.

Also I would be inclined to use a fast blow fuse if designing this from scratch. Not depending on the PDP breakers or the RPi USB protections.

I think we powered a USB hub separately from the RPi and plugged the cameras into the hub. Then the RPi stayed within the VRM’s capabilities. We have a couple USB voltage/current meters that allow us to get closer to limits without violations.

We’ve also powered cameras separately from the signals. Then no hub is needed. Same for a flash drive that you might use on the RPi.

This seems like an easy function to code since there is a shutdown now that could be activated from a roboRIO prompt say from network tables.

If you ask because of battery life, the largest legal battery is what my team used and it ran for several hours. A smaller battery weighs less and you have to manage the charge better. The limiting factor on the batteries we found was as I wrote about is actually getting 5 v for a reasonably long time. I would have recommended a smaller battery and charge it a couple of times if we could have found one with 5 v for real not just almost 5 v.

Another gotcha with the nice batteries is they automatically turn off if no load is sensed and the threshold is not 0 amps. When we used the battery for the RPi we also needed it on the NavX and that load alone wouldn’t keep the battery on. Sometimes the battery would turn on automatically with higher load and sometimes not. There is an ON button but that’s another thing to forget at start of match. A small load resistor might solve the auto-off possibility.

I’m not recommending an auxiliary battery but it has its uses that helped us when we knew we’d brown out and can work very well but maybe not perfectly. Of course we aggressively worked on not browning out but couldn’t get to none thus the battery was used all season.

In our matches, the lowest voltages were ~7.5v. It looks like it can handle it pretty close to 5.5v at 3 amps. 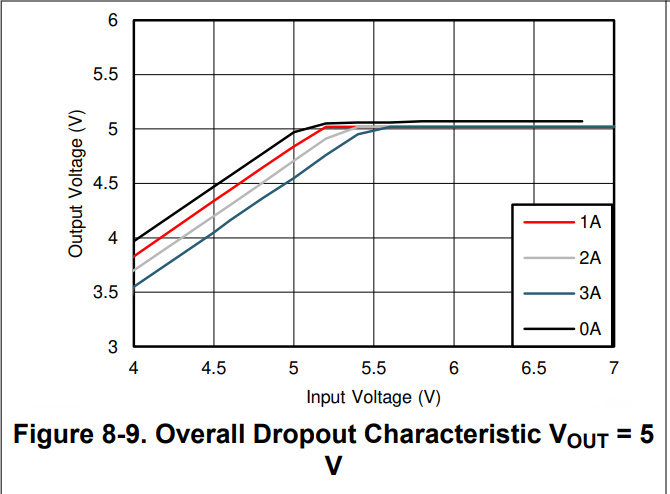