I planned to come here to leave a tribute…not break the news.

Mike passed away while visiting his mother in Ohio.

Huge loss for the FIRST family.

There never would have been a Team 225 or numerous off-season events without Mike. I’m sure many others can say the same. Incredible man.

This is truly a massive and horrible loss for all of FIRST, especially those of us on the East Coast who have experienced Mike Wade’s efforts first hand. Mike was an inspiration to us all, and a terrific person. The prayers and hopes of 116 go out to everyone who knew him.

Yeah…I don’t know what to say.
Mike is an incredible person that did so much for the community. He did incredible things for FIRST. He single handedly made many of the East Coast offseasons possible. I’m shocked.
I’m at a loss for words.
My thoughts and prayers are with his family.

I have no idea who to say, Mike Wade was one of people that truly showed what FIRST was all about.
This is a huge huge loss for everyone that Mike had come into contact with.
My Thoughts will be with his family…

I’m utterly speechless. Machine shop at the Championship, a field all over the east coast, massive contributions to FIRST in MD/DC/VA, and a wonderful NASA embassador.

And more importantly than that, a wonderful human being with a huge heart. I’ve known Mike since my first year in FIRST and I’m struggling to think of what it will be like without him. Thank you for your example Mike and my deepest sympathies to his family and all who knew him well.

Peace be with you Mr. Wade and to all of those you leave behind.
Godspeed,
Jane Young
FRC Team 418

Thanks Mike for everything you’ve done for FIRST, you will be missed.

This picture of Mike was taken on April 17 at the reception held after the FIRST mentors received the Governor’s Volunteer Service Award in Maryland.
Rob Taminelli (Chesapeake Field Supervisor) is on the left.

We will try to send out information about funeral/memorial service and where condolences can be sent from the FIRST family as we get them from Mike’s family. 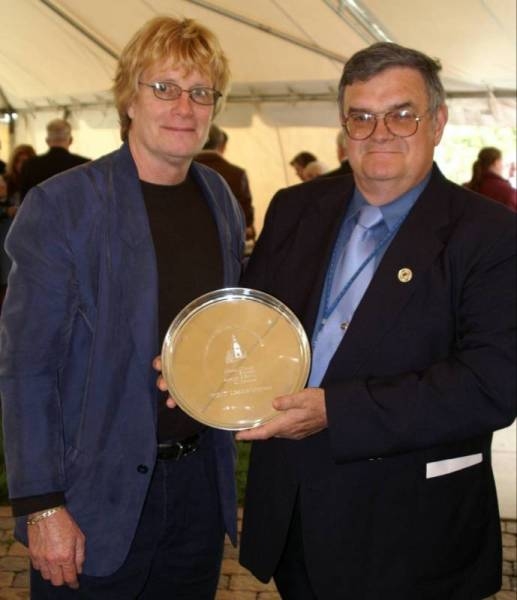 Mike was one of the truly great FIRST heros. His dedication and passion was felt by all that came in contact with him. He may have passed away but will always remain with us who knew him. Let us be inspired by his life and continue what he started.

I have heard about Mike Wade from most of the new englanders I know. From the words that was spoken about him, he sounded like he was one of the most valuable FIRST member we had (I wish I could replace had with have). May peace be with you Mr. Mike Wade. You will be missed.

This is terrible news. I never met the man personally, but from what I hear Mike was a terrific person and a fantastic proponent of FIRST on the eastern seaboard. My thoughts and prayers will be with his family and friends. We can only hope he’s now in a better place.

Mike was a marvelous person and a tremendous asset to the entire FIRST family. It seemed that where ever I went for a FIRST related event, Mike was there, making thing possible and making things go well.

We’ll all miss him…I feel honored to have known him.

Sympathy to his family from all of Chuck 84.

Team 234 will keep the team and family of Mike Wade in our thoughts and prayers. It is always a terrible occasion when you lose a loved one. I did not know him personally, but I am sure that he did many great things for FIRST and those around him. Both he and his contributions to FIRST will be remembered.

I first met Mike in 2005, at the Capital Clash. From about twenty minutes into meeting him, it was clear that he was one of the hardest-working folks in FIRST.

This fall certainly won’t be the same in the Mid-Atlantic. He will be missed.

From the ABC Cafe, the ghosts of the barricade await, Mr. Wade. Be honored.

The FIRST community will be mourning this great loss. Mike Wade was a pillar of support in FIRST. He had a positive impact on so many people.

This is truly a sad day.

Peace be with the Wade family and all who were close to him.

Mike Wade was a man of tremendous class and integrity, completely dedicated to the FIRST community. He will be missed by all, and the impact had on everyone he touched will never be forgotten.

May he rest in peace.

I’ve met Mr. Wade at almost all the FIRST events I have attended, and he has always been willing to help us with a smile. On behalf of Team 1123 and myself, We would like to extend our greatest condolences to Mr. Wade’s family.

This is a terrible lose for the FIRST community. My thoughts are with Mike’s family and friends. His efforts to help FIRST and support NASAs education programs is gigantic, and he will be missed. I don’t know what to say.