As week two comes to an end I am surprised at the lack of Sandstorm discussion, so I thought I would break the silence.
What is the best Sandstorm routine you have seen so far? What is your team capable of doing? Does your team do driver controlled, autonomous, or a combination of both? Can you climb down from level 2? How do you feel about the running of Sandstorm? What problems do you have with Sandstorm? What do you think Sandstorm will be like at championships?

By far my favorite sandstorm has been 1114 (2 hatches on the side of the cargo ship.) This is essentially scoring 4 game pieces for 10 points, which is the most efficient sandstorm I have seen from a single robot.

It also leaves the hatches on the front of the cargo ship, a much easier task, to be handled by an alliance partner

I really like the Sandstorm period. It’s the most robots I’ve seen moving in the first 15 seconds of a match since I started FRC.

I think we’ll probably transition a few of our routines from driver control to fully autonomous for improved consistency at some point. I think by champs the best routines will all be fully automated.

Alliances can win or lose a match during the Sandstorm period… we faced an alliance in the quarterfinals that had a 32 point Sandstorm and it was a killer to try to come back from. I think we’ll see some 37+ point Sandstorms later in the year which will be impossible to overcome for weaker alliances.

So far in my experience, I’ve mostly seen robots just spinning in circles and a one-game piece scored in Sandstrom. This year my team relies heavily on vision processing and if the limelight works right, we can autonomously score or be en route to score a two hatch auto from any two places on the field. However, we had limelight glitches in our first rounds at week one. Our autonomous messed up, and with drive team only seeing it messed up and not the whole process of what the robot was doing, they lost faith in running anything but the safety of going forward and placing a hatch cover on the front of the cargo ship until our last quarterfinals match. We can get a hatch on the front of the cargo ship and hatch on the rocket in 15 seconds. This competition we are working to make our drive station more driver friendly as to what is going on during the sandstorm period, so hopefully, we can convince them to run the good auto and our partners to let us run the good auto.

Does anyone have a video of this sandstorm in action? I can’t seem to find any video of 1114 from this season. Sounds awesome! That robot looks incredible

This is our sandstorm plan we can follow the green lines to any position, any of those positions go the red path back to the loader, and from the loader following the yellow line to any location. We also can line up autonomously and pick up and place hatches autonomously in the driver-controlled period as of tonight. 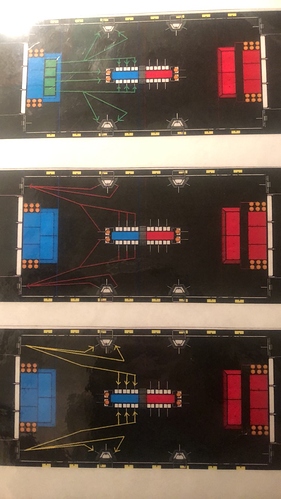 We completed our first (and only) 2 hatch cargo ship sandstorm at the end of quals on Saturday.

Thanks! might not be quite as impressive as 1114’s as theirs is super smooth and also autonomous (we just drive in sandstorm). Good luck to you too!

We have come close to a two hatch sandstorm. Sorry for the abrupt video cut out, battery died.

Here is one of ours, it’s not quite one of our final versions in this cut or one that gets them both in under 15 seconds, but it still looks cool. Below is our robot reveal it has some more of our sandstorm capabilities.

A showcase of what our autonomous, I mean Sandstrom can do.

Last year, when I was technician, I was obsessed with autonomous. I had a lot of fun with it last year. This year, I programmed just as many autonomous modes, but because of how precise you have to be, I never got any of them working. Some of them relied on vision which we didn’t get working either. To be fair, most of vision worked, we just didn’t test and practice enough with it to use it.

During sandstorm, I changed the drive perspective of the robot so left is always left when you’re looking at the big screen and up is always up the joystick (we have swerve). This made sandstorm like a top down video game with about a second of input lag. While I don’t think this is what first was going for when they introduced sandstorm, the Q&A said it wasn’t against the rules and it allowed us to easily get cargo in the side bays of the cargo ship during sandstorm and also place a hatch panel on the center bays in sandstorm in a few matches.

I just hope at Missouri State I’ll be able to see the screen. Otherwise, we might actually have to use our mostly untested autonomous modes or even worse, our poorly placed cameras.

Here’s a video of me driving solely using the big screen easily placing a cargo in the cargo bays.

At many competitions, the big screen is only visible for one alliance (like at mine) because it is at one of the sides. Also, they often switch camera angles to focus on one team during the sandstorm. Cameras definitely are a better option, but I guess it worked out for you

We drive by camera, with a pixycam to help alignment if needed. We go for a hatch on the cargo ship securing that cargo in there. We’re hoping to improve our cycle time enough for a two hatch sandstorm. We’re getting closer but not quite there yet.

To prove it wasn’t a fluke, they did it again in F1 and came away with a really nice score for a set of teams who can only do level 1.

I think at the worlds level, the best alliances will be able to put hatches on all four of the furthest cargo bays. Given the strength of defence in this game, knocking out the furthest cargo bays in sandstorm will be invaluable. Either that or they will knock out a couple of the far side rocket hatches to expand their scoring options later.