PWNAGE is happy to announce the 2023 Season version of ScoutingPASS Check it out: GitHub - PWNAGERobotics/ScoutingPASS: A FRC Competition Scouting Application.

We have a live demo of it for 2023 scouting running here: Scouting PASS.

ScoutingPASS continues to evolve. Here are the changes for the 2023 Season:

For those of you who are not familiar with ScoutingPASS here are the main features:

Have you thought about using a system similar to your field starting position (where you tap on a picture), but for keeping track of where game pieces scored?
I’m thinking it might be useful to create heatmap of where people have scored on the grid. This might help you figure out which of the chokepoints a defensive team should cover.

Happy to see ole’ reliable has returned. Excited for another year!

Have you thought about using a system similar to your field starting position (where you tap on a picture), but for keeping track of where game pieces scored?

You can kind of do that now with the field image element. It will chop the image into a 12 (x-axis) by 6 (y-axis) grid. So if you scale the image so it fits in the left (or right) 3/4 of the image (using only 9 of the 12 boxes on the x-axis) then each “node” will contain 2 boxes. Count either box as a score (or use 1 box for cones and 1 for cubes). You could create the image to only use the top half of the image and left 3/4 then only 1 box per node, but that would leave a lot of extra space for misplaced clicks.

It’s not ideal, but it could be done.

We will look into a custom field image element as this would be a good application for it.

Next we’re pondering a clickable Grid layout (image) to track scoring in the grid like @pirate_raider suggested. What do you think?

we have been trying to implement the new google sheets feature and we ran into a problem that we cannot get past. We followed the step by step that you guys have posted on the github, but the only thing that gets imported is the date. Any time we try to add any new heading such as ‘scouter’ the sheet does not update, not even date. Basically the sheet only works with the date heading. What am I missing or can do to fix this problem?

Thank you for the help in advance.

A few things to try to troubleshoot the Google Sheets integration:

If you PM me your website and spreadsheet link, I can check the configuration and see if I can find the issue.

Hello! 7617 RoboBlazers really appreciate you sharing this with us! We are seeing a weird glitch where the match level and robot radio buttons can’t be selected at the same time. Clicking one value in either field clears out the other. We’re new to this approach and would appreciate any advice. Thanks again. Update: “Bad copy/paste” message from github.

Things are moving fast this year. Many more updates to ScoutingPASS have been released.

The biggest new feature is the new Clickable Image component. (Thanks @pirate_raider!)

We made a clickable image of the Grid. Now you can easily track where and what game piece a team scores on the Grid. It’s also a simple process to then calculate how many cones and cubes were scored as well as what level (hybrid, medium or high) game pieces were scored.

But that’s not all! The clickable image of the grid is tied into the Cycle Timer in the Teleop page. Start the timer when teleop starts. When a team scores, you just need to click the image and the Cycle Timer records the time and resets the timer for the next cycle. If a team drops a game piece you can manually record the cycle by clicking the New Cycle button. 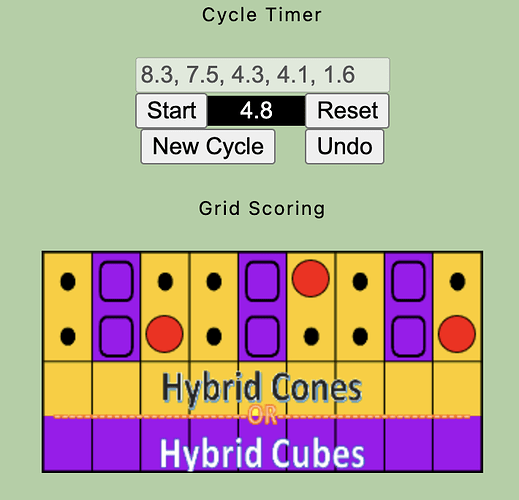 Love the new update. It’s going to make cycle time tracking a lot easier. How do you plan on formatting the placement data in excel/sheets? I tested it with the excel macro and it gave numbers that I assume are certain scoring zones, however are there other ways to possibly visualize the scores in excel?

Thanks again, I love your program with all my heart. Makes our scouting team function!

I tested it with the excel macro and it gave numbers that I assume are certain scoring zones, however are there other ways to possibly visualize the scores in excel?

Yes, the boxes are numbered, starting from the top left going across. The output is a list of all the boxes that are checked. We’re working now on Excel/Sheets formulas to turn that array of boxes into columns like “NumOfConesScored” and “NumOfHighScores”. We’ll publish those when we’ve got them ready.