Our second generation prototype shooter accuracy is right on the money, 10 for 10. Now programming has to live up to the talents of the mechanical sub-team.
FIRST shots

It works well with both new balls and severely damaged balls. There doesn’t seem to be a great deal of difference in the ballistic characteristics of old torn-up balls vs new balls.
This new version shooter doesn’t leave a mark on the balls at all, as opposed to the original model that was able to strip the coating off the balls after a hundred shots or so. 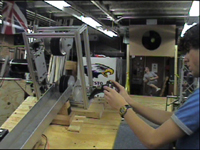 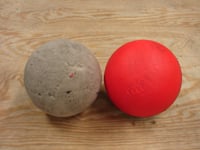 Sweet video and how cool is it to have a dog roaming around while you build robots. looks like a great shooter from ya guys.

Sweet video and how cool is it to have a dog roaming around while you build robots. looks like a great shooter from ya guys.

how cool is it to have a dog roaming around while you build robots.

Some of the balls have a few extra teeth marks, but Lady never tires of fetching for us.

She’s actually a guide dog in training, not that we’re shooting blind!

I’ve seen several examples of teams getting the softball type launcher working. While they work, they also seam to be quite heavy and are mounted kind of high. Don’t forget the CG issue and the ramp factor. If the launcher is mounted low in the robot cg is better but blocking is a problem. Mount it high and blocking is harder, But has any one looked at how unstable a robot can be going up the ramp? The diamond plate is a pain especially if your robot gets a little sideways. I love when opposing team robots tip, hate it when it’s our alliance partner. Each day that goes by this game gets a little more interesting.

NICE launcher. It is amazing how many teams are going after the softball style pitcher this year. Seems like a popular idea.

Question is, who has a complete system yet? One that can pick up, load, and shoot balls.

Thanks for the heads-up. Everyone should heed your warning.

Our 2 drum shooter is about 16lbs, and will have a gimble of about 10lbs mounted below it. We’ll be putting the remaining weight as low as possible to maintain stability.

thats basicly what we are doing only we took the concept and turned it on its side. we dont have a goal set up yet but we are in the old middle school and use the basket ball goals… smaller target so we dont make them 100% but its amazing. good job with yours

Good, accurate shooter. The only thing I don’t like is the fact that you can’t really go much more rapid fire than that, or so it sounds like by the motors.

Good, accurate shooter. The only thing I don’t like is the fact that you can’t really go much more rapid fire than that, or so it sounds like by the motors.

The current system has no software support to help ramp the motor back up to shooting speed after a shot. As Mark said in the first message of the thread, now it’s time for the programmers to do their magic.

We’re targeting a minimum of 10 balls in about 7 seconds, which allows an autonomous with 3 seconds of driving, the rest for shooting.

Where were your safety glasses?

I’d like to see another video when you can maintain a steady RPM after shooting. I think that shooter is going to be beastly if you can use it right.

Very impressive. Quite possibly the most elegant and smooth shooter I’ve seen yet. Its a pretty good standard to have set =)

I really like how you used those tiny wheels but still achieved a great amount af acuracy. Now I’d like to see how you guys are planning on aiming that sharpshooter.

I really like how you used those tiny wheels but still achieved a great amount af acuracy. Now I’d like to see how you guys are planning on aiming that sharpshooter.

The shooter will be mounted to a rotary table (allowing rotational motion both horizontally and vertically), and aimed via the camera. Balls will be loaded into the shooter via a pneumatic cylinder.

I don’t think this robot will be considered a rapid firing machine comparitively. But definatly the makes of a nice sharpshooter.

As soon as Mark fine tunes the software to re-ramp up the RPM’s after each shot we hope to greatly increase rate of fire.

Full recovery last night under software control took about 1/3 second per ball launched. That means it’s capable of 10 balls in under 4 seconds (if we can hand load them that fast).

Back over to Mechanical Engineering

Where were your safety glasses?

just a few questions, one how long does it take to start up from nothing, second how much battery comsumption is there, and last a mixture of the two questions, would it be benifitial to quit in the defence, or does it take to long to get up to speed, I can just see how that is going to be a big battery consumtion, then you add the pnumatics, which will take a bunch if it will be feeding only one ball at a time, and then your drivetrain, and the movement of this and last a ball colection of some sort. I see how it is an amazing prototype but your battery will run short I assume every match.