A bit of an odd question, but there’s certainly plenty of creative minds floating around this forum.
I am trying to think of a way to build a mechanism with the following functionality. The purpose of the mechanism is to winch up and then release a spring loaded string continuously.

Ideally the direction switching is accomplished mechanically with a clutch or something similar. I feel like this mechanism exists in some existing product, but I haven’t been able to find any examples.
Thanks!

For linear motion, search “choo-choo mechanism” on this forum.

For pure rotary motion… typically you’d do that with a motor command. That said… I think you MAY want to look at “barrel cams” (not on this forum)–may work best if you can slide the drum along.

If you were only doing it once I’d tell you to start retracted, winch out until the string returns to a certain point, then stop.

I’d say it would be easier to do it electro mechancially. You’d want a gear box after the winch that was X:1 X being how many turns of the winch are required to give the desired travel. That would actuate a single pole double throw switch, on-on. On that final gear of the post winch gear box you’d attach a lever that would actuate the switch sending the signal to reverse direction and when it came back around the other way it would flip the switch back to the other direction. In theory that final reduction should be spinning slow enough that over travel shouldn’t be an issue if you have a bit of flexibility in your trip lever and/or switch.

What kind of speeds and forces are we talking about here?

Simplest solution if we are allowed to freewheel back to start position A is to just over center a linkage, see 2014 ball launching mechanisms. to get 2-3 rotations you should just be able to handle that through a reduction.

If not allowed to let the mechanism snap back to place. A simple differential driven by the motor and a portion of it being locked / unlocked by the linear motion of the spring comes to mind.

I’m intrigued but not following here.
Freewheeling would be fine. I am trying to imagine how an over center linkage could be incorporated to mechanically couple and decouple the drum.
I do only need 2-3 rotations… what kind of reduction are you imagining.
Also on the differential, what do you mean by the linear motion of the spring?
Thanks for the input!

I agree that a motor command/control would be the simplest way to accomplish this, but I am trying to solve the problem mechanically.
Barrel cams seem like an interesting option for getting linear motion from the drum. The part I am having trouble figuring out is how the mechanism can mechanically switch directions or decouple a clutch with the same input device driving it in the first place; the motor. I’m not even sure if this is physically possible

So, if you have a small diameter wheel attached to a larger wheel with a linkage arm, the smaller wheel can be rotated continuously in one direction which will result in only a partial rotation of the larger wheel. Depending on the radius of where the linkage arm is attached to each wheel you could easily get the larger wheel to rotate, say, 1/4 turn clockwise followed by 1/4 turn counterclockwise as the smaller wheel continuously rotated in just one direction. A good example of this mechanism is the oil field pump jack mechanism.

The trick with the barrel cam is that you’d set up the winch to slide, and have the cam “cut loose” at the end of travel to slide the drum back.

Actually… ratchet-and-pawl setup could probably work. Setting up the disengage mechanism is the interesting part but it could be done relatively simply.

I am trying to imagine how an over center linkage could be incorporated to mechanically couple and decouple the drum.

Lose the drum. The idea behind an over-center “choo-choo” mechanism here would be to pull the string linearly a certain distance, and then release (with a spring pulling it back straight). It means you need more linear distance to pull the string back, where as a drum-based system would be more compact. It’s an alternate solution to using a drum that, in the FRC context, comes to mind with the sort of “pull and release” behaviour you were talking about.

For a short stroke you can have a loop of chain with a pin sticking out the side, parallel to the shafts. A linear guide runs along the chain loop. A slider runs on that and has a slot perpendicular to the linear guide that engages the pin. As the pin goes around the loop it alternates sides, driving the sliding block back and forth for continuous rotation.
Its a Level wind mechanism. https://youtu.be/iXbi7jod57Y

From my understanding of the task, the string is always applying tension on the drum. If this is the case, you could potentailly have two gears, a larger driver and a smaller driven, with some teeth removed from the larger driver. This ratio depends on your requirements.

If the string isnt applying tension to the drum you can always use a torsion spring in the drum for the same effect. 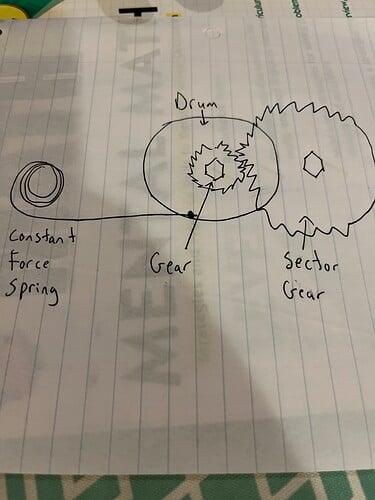 You can set up the number of rotations for the drum by setting the gear ratio between the two gears, as well as the how big the smooth part of the sector gear is.

If you want to make the drum snap back hard to it’s original position, use something like surgical tubing instead of a constant force spring. This will allow you to store a lot of energy in the drum when winding it.

On 3419, we used this mechanism to make a catapult for Arial Assist, where you needed to store a lot of energy to launch the big heavy ball. In that case, we had a ratchet built into the sector gear so that we could pause the mechanism right before the sector gear disengaged, and the spring wouldn’t back-drive the sector gear. It worked very well and we could store an enormous amount of energy (perhaps a dangerous amount…) in the device.

Yeah perfect, I didn’t have a way to illustrate it while at work but that’s exactly what I was trying to say. The way you tension it is basically up to you.

You’re prescribing a solution (must be a drum) when that might not be the optimal solution. You’re describing motion that is often handled by 4-bar linkages (e.g. spin a motor constantly, get cycling motion elsewhere).

If the tip of the wiper blade is a ‘drum’ and you don’t need to swing multiple revolutions to get the desired travel, well, there you go!

Concern here is the (shock)loading on gear teeth. May be fine for the application in mind, just I have no Idea on the size of mechanism and the forces at play here. over centered linkage is far and away the best idea that comes to my mind in terms of wear on a “freewheeling” design.

Also on the differential, what do you mean by the linear motion of the spring?

The CF spring unspools, so when it reaches a certain point (i.e. 3 wraps around a drum) it (un)locks a pawl on the differential outputs causing the motion to reverse