So yesterday Carbide 3d announced in a blog post that they are releasing the Shapeoko Pro. I’m curious on other people’s thoughts/opinions.

The two biggest changes here I would say are the change to linear rails, and the move from 6mm belts to 15mm belts.

At $2800 usd and free shipping to both the US and Canada for the XXL version, this to me seems like a serious improvement over the standard version.

At that price point, I’d sooner get an omio. Might be competitive for teams locked into buying from the US.

I’ll add that a traditional shapeoko XXL is a decent bit larger than an omio on terms of cutting area (12" more in the on axis).

However I tend to agree with you. I mostly had teams that are limited to North American vendors in mind. And for them, an XXL or even a smaller model could be very compelling.

I’m apt to agree, but if there’s some kind of educational discount down the line, the SO Pro might worth it to some for the creature comforts (non Mach 3 interface, integrated tool height setter, support for an XYZ probe, etc.).

For personal use, between the SO Pro and Nomad 3 full announcement, I’m close to canceling my Bantam pre-order.

I was actually just going over this machine the other day with a mentor, he ended up on the Omio hype train as well after I told him to bug some friends about theirs. If you pick a bit deeper at Bantam and the machine you likely aren’t going to be too happy.

If the name Bre Pettis rings a bell you know what I’m getting at. 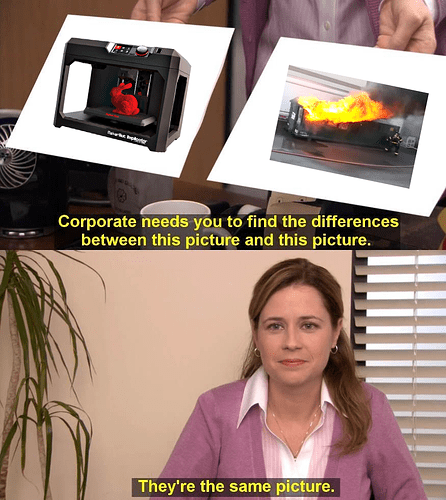 If you pick a bit deeper at Bantam and the machine you likely aren’t going to be too happy.

If the name Bre Pettis rings a bell you know what I’m getting at.

Frankly I find vague statements/allusions like this bothersome and kind of gatekeeper-ish. If you have useful information to share, then please share it. I’m pretty sure I know what you’re getting at, but clearer comments are probably net better for the CD community.

I’m well aware of Bre Pettis’s involvement in this new mess. My impression, colored by some rumors when I was an intern at MAKE: (of no relation), was Bre’s biggest sin was the closing the source on Makerbots (which used plenty of open source things) after starting to see clones pop up for sale. The smart extruder debacle is definitely noteworthy as well.

Regarding the new Bantam machine, spindle power and cutting area seemed fine for my use, and the enclosed nature and built in probing made the price easier to digest*. I’m not trying to machine 2x1 tubes and I don’t need the MRR afforded by a 1 HP+ spindle. While I was upset about needing a subscription to access speed/feed override, they’ve already decided to include those features by default. I’ve also been impressed by the production value of Bantam’s new tutorial videos thus far.

I pre-ordered months ago when the Nomad 3’s features and price weren’t fully announced, thinking that I would get the Bantam machine by the beginning of September. Now I’m waiting until the end of October at least and definitely feeling some regret.

*I’m a (probably overpaid) SV tech worker, so my views on money are pretty skewed and not in line with the average FRC team.

I think you’ve gotten the jist of the haze that sort of follows Bre now, but my issues mostly lie with the mechanics of the machine as it seems like they’re not planning to deliver a subscription model machine.

In no particular order:

Still using linear rods and bearings: while the Nomad and others follow in this trend, the Omio gives you the option of “proper” (albeit clone) rails. This has a number of rigidity and longevity advantages.
I’m also concerned about some of the decisions involving those rods, the X and Y axis rods are very close together, closer than the OG Nomad, but the Z axis rods are spread wider for seemingly no reason? The design of the machine could allow for a much wider, more rigid work area without increasing the overall volume.

Exposed motor airgap: this is hard to catch in a lot of the material that’s out there, but that’s just a standard, hobby grade brushless motor in there. Metal chips will undoubtedly work their way in (and ofc ferrous materials will make a run for the magnets). This alone was enough of a red flag for me after experiencing some wonderfully grinding motors on RC vehicles.

On top of that’s it’s an outrunner. I know it’s an enclosed machine, but that’s still not a great thing to have. Omio spindle is sealed and watercooled*, which presents a different challenge, but it’s not a “swarf actively killing the machine” problem.
Spindle power is a meh comparator as the MRR is more dependent on rigidity, but it should be noted that the Omio can take larger tools*, though that’s mainly an advantage if you need to resurface a wasteboard.
The Bantam does include/integrate an enclosure, which is easily its strongest selling point over the Omio. Second is the slightly more closed ecosystem for presumably easier CAMing, but Fusion is at the point where you can throw almost any machine’s post processor in it and be set, along with plenty of established resources.

That’s all the main things I remember going back and forth about, but if I forgot anything significant I’ll add it.
Overall, not great not terrible compared to preceding hobby machines. It definitely seems like a group’s first try at a “real” CNC machine, and I’m sure we’ll see a revised model/mechanical upgrades come out if Bantam decides/is able to to continue development. If this came out in 2012-2016 or so there’d be really no contest in the hobby market.

On the other hand, if someone just shoved the Omio X6 into an enclosure and included a Fusion 360 setup guide in the box it would be a slam dunk. The last barrier being the import process, but looks like R.C. and Swyft are working on that for the larger X8.

As you’ve alluded to, I think the Nomad 3 is probably the best for your situation and many similar ones at this point (my current closet CNC setup included lol).

Those are some solid points, thanks for sharing! (No sarcasm)

Still using linear rods and bearings: while the Nomad and others follow in this trend, the Omio gives you the option of “proper” (albeit clone) rails. This has a number of rigidity and longevity advantages.

Profile linear rails are definitely much more rigid, but my impression is that rounded rails can be more forgiving to misalignment (partially by virtue of the shafts flexing rather preloading the ball bearings themselves?). With <1 cubic inch/min cutting I’m hoping it won’t be a huge issue for me.

the Z axis rods are spread wider for seemingly no reason? The design of the machine could allow for a much wider, more rigid work area without increasing the overall volume.

It seems like the wide-stance Z axis shafts could have two advantages while allowing for round rails to be used: 1) Minimizing the lever arm of the cantilever coming off the Z axis bearings (cantilever deflection is proportional to the lever arm cubed). 2) increasing the polar moment of inertia to minimize torsion.

On top of that’s it’s an outrunner.

My experience with linear rods goes back further with 3D printers; even with low loads and verified properly hardened rails (polished drill rod is all too common) you’ll start to wear in grooves and kill bearings over time. I’m even starting to see this on the Nomad after ~5 years of very light use, mostly machining plastics.
It’s not a make or break, but also not a compromise I’m fond of.

I did consider the cantilever loading for a bit with the wide Z, but spreading the rods wider would only help on heavy X direction cuts. Might as well have the same deflection in all directions. It seems just a bit on the extreme side when you consider similar machines that get away with half the c-c spacing on those rods. Making the whole carriage wider does alleviate some of the deflection along the X rails, but so would simply shrinking the X axis rod width and carriage width proportionally. The X and Z rail setup as a whole is a departure from the “normal” way these are setup so I’m curious to see some heavier users review after they’ve been in the wild long enough.

The increased MoI isn’t too concerning tbh, as the outrunner consequentially has more stopping torque and is running at a lower RPM than most inrunners. It gets them a reasonable spindle speed without requiring a reduction, but Carbide took the more elegant approach in developing a lower Kv inrunner and running it through an upduction to the spindle (which also lets you fiddle with rpm vs torque by changing belts).

I’d be careful with making an enclosure, as this style motor typically uses the rear of the rotor as a fan to draw air through. From what I can tell they’ve actually blocked the exhaust ports on the mounting plate, so it might not be running in a range where cooling is an issue. Just something you’d have to test.

It gets them a reasonable spindle speed without requiring a reduction, but Carbide took the more elegant approach in developing a lower Kv inrunner and running it through an upduction to the spindle (which also lets you fiddle with rpm vs torque by changing belts).

It’s not clear to me how much “development” Carbide actually does on the motor side, and I’m not sure whether the Bantam does or does not have an upduction as well. I do wish Bantam just copied the Nomad approach.

The new Nomad motor looks like a variant of this COTS design: 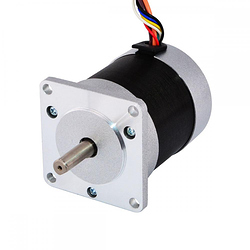 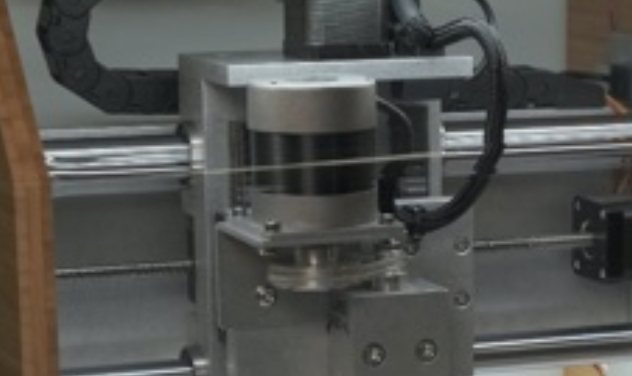 The old Nomad motor is some variation on this design: 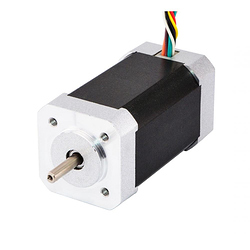 Given that similar NEMA 17 frame inrunners can be had from a handful of Chinese vendors, I wouldn’t be surprised if the new motor is also a stock design or variant thereof.

I didn’t look into their motor situation too much, just remembered talking to a 4201 alum that was there for the development of the original nomad. I think they had to work with a manufacturer to just hit all the specs they wanted and with a sensing solution that would work with their hardware. The OG has an encoder “slice” on the end of the motor, but it was changed to fully integrated when they revamped the line. Probably just the normal mix and match with some quality standards.

It also doesn’t look like the Bantam is sensored, so no low speed torque, but it shouldn’t matter much as you typically want to max out the RPM on these small machines.