looks awesome. one question: where are you holding balls? can you only have 1-2 at a time?

Can you describe or provide details for your lift?

The Intake extends out to form a hopper, the balls stack in a zig-zag pattern two high vetically and the full hopper length. The front rollers act as an agitator and the retraction of the intake forces balls into the injector mechanism to the shooter. All 5 power cells can be stored

I am very concerned about the drawer slides holding a heavy intake and extending out of the robot frame. That’s either going to fall apart instantly, or as soon as another robot hits it.

I’d look into using bearings on box tube as a more robust method of actuating, like a sideways elevator.

I’d also recommend something similar for your actual elevator. Drawer slides are not very stiff in any direction.

The trickiest part of the double turret was figuring out how to double wrangle with it. But, with the help of a little Pixie Dust, we got the magic working!

This is funny until you realize you’re in the same boat.

The drawer slides can support 55kg on their ends at full extension, and are mounted with the top vertical for those loads and the lower horizontally for side on hits. The entire robot can be safely carried with and by the intake at full extension, and the slides will only go out about 60% of the way during a match.

Slides for the climber do not support any robot weight, that is taken by the climber winch with 2 falcons in the center of the machine. The slides were the most compact solution that could quadruple in height despite being fairly hefty.

We have assembled both the intake and climber, and are all very rigid and we consider trustworthy.

I highly, highly suggest making your intake as wide as possible–as wide as the robot, even, with vectored wheels to pull them to center if necessary.

Best case: A 27" wide over-the-bumper and/or vectored intake has an effective width of about 34", because you can catch the middle of a ball on the edge of your intake (and against your side bumpers) and still drag it in.

Not great case: A 27" wide robot with 6" bumpers on either side using only an intake that fits in that bumper gap loses a full foot off that number but can still catch balls with the edges of the intake, so the effective width is 22". Not terrible, but not great, either.

Worst case (which I don’t see in the designs here): If the ball needs to travel between the bumpers before contacting any rollers then you’ll miss those halfway-hit balls every time, reducing your intake width to a mere 8" (27" robot - 12" bumpers - 7" half-hit balls bouncing away = 8") – you’ll have to line up almost perfectly in order to pick up a ball.

And as a side note, consider your intake motors wisely. To pick up balls no matter how fast you’re going when you hit them, you want the surface speed of your wheels to be at least greater than the maximum speed of your robot (with around double probably better), so you’ll likely not be gearing them down all that much. Power Cells are grippy and tend to bind in fun and unexpected ways, which might be clearable by reversing your motors, but will stall them upon that initial jam. 775 Pros/Red Lines are not stall-tolerant motors, even for rather brief periods of time. 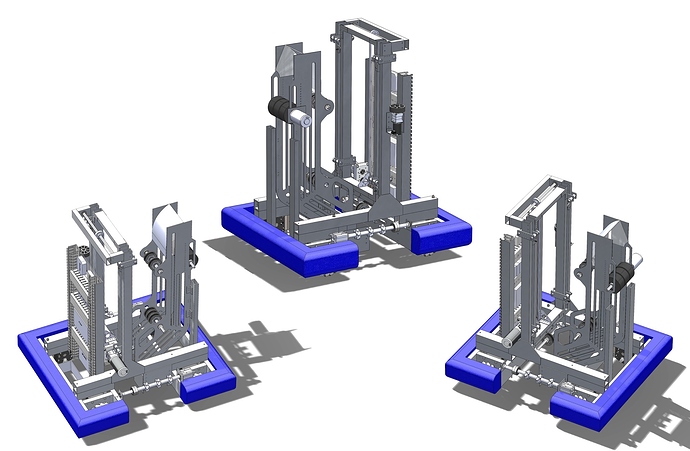 We are going with mecanum this year

Looks like they have intakes on both sides of their robot so they would need to go left and right to intake power cells. He never really answered me but I think they took some ideas from 1717’s 2012 robot. Really smart and really cool robot if you go look it up.

That robot was actually a big inspiration for our teams design this year. We don’t quite have the resources for swerve which is why we went with mecanum

This is gonna be fun.

Sigh… I wish my team would understand this. Thank you for pointing this out for the teams that don’t grok this idea quit yet.

I’ve done my best to explain how important a wide intake is, but they seem to be more concerned with having a protected intake at the expense of alignment with the reasoning of, “We have a swerve, so we can just align to the balls, even with a narrower intake.” I have nightmares from being a narrow bot in 2009, a through-the-tube intake in 2011, and between-the-bumper intake in 2012.

My hope is that they realize pretty quickly how much time it wastes and decide to add an over bumper intake before week 1. 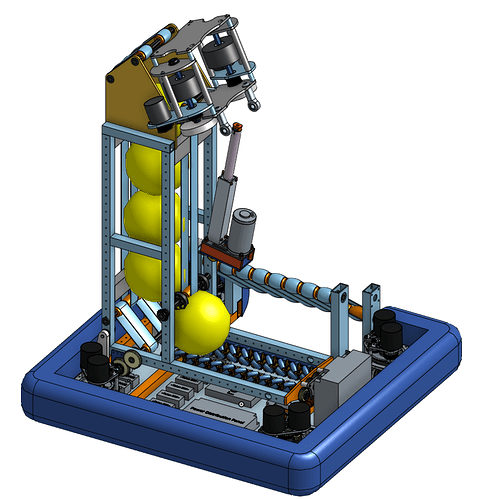 “We have a swerve, so we can just align to the balls, even with a narrower intake.”

Give them the challenge of vision-tracking the power cells and dealing with the logic that comes with multiple power cells in frame. It’s a win-win - they can automate use of the swerve as they think they want to, and your nightmares are averted.