Well, I know that a lot of people trade shirts with other teams, and I’ve got this extra techno tick t-shirt just sitting in my room… I mean I’ve never even worn it, and most likely never will because the team just got new shirts this year… so what else is there left to do with it, but put it to good use and trade it?? anyone interested?? just PM me or something

I mean, obviously in this thread you can ask other teams for their shirts and do your own trades… I just thought I’d start it off by offering this Techno Tick shirt… lol :o

I do! I’ll be tossing you a PM shortly.

hey i’d be glad to trade things! the firebirds stuff is really neat… even though we’re an all girls team for u guys… but whatever

Well, I have this clingy red shirt my mother got me for Christmas, tags still on it (she knows I don’t willingly wear red) or this black sleeveless shirt with hot pink sparkles, tags still on it (my mother’s choice again, sigh)… kidding, kidding… but you really didn’t specify that it had to be robotics shirts…

hey i’d be glad to trade things! the firebirds stuff is really neat… even though we’re an all girls team for u guys… but whatever

hmm…FIRST crossdressing? what size is it? and is it a normal style T-shirt?

Hey i got an extra Gael Force shirt laying around, PM if u wanna talk about trading. :]

I have a whole lot of Chuck84 shirts in a variety of sizes, colors, and styles. PM me if anyone is interested in a trade!

i’ve come to the conclusion that i have to get some more shirts to trade!

yeah, they’re normal style t-shirts… i like the hats better, so i’ll probably trade those at nationals next yr. pm me if u want any.

I have an extra short sleeve and long sleeve yellow bobcat t-shirts, if anyone wants to trade. I’ll be at battlecry,so we can trade there (so this mostly applies to those in the New England Region.)

BTW, I would be interested in that Gael Force Shirt. Also, any of the other UTC teams from around here, I would like to trade shirts (that means you, RAGE, Buzz and Aces High plus Birds Of Prey)

I have some 1353 shirts available for trading if anyone is interested. just pm/im me and we can work out details. i will be at the Wonderland event and will have all my shirts with me then if you want to trade there.

Yeah if anybody wants a 71 B.E.A.S.T. shirt pm me or im me on aol instant messenger (venomguymike) and we can work something out. I’ve got extra shirts from 02, 03, and 04. I would particularly like to get a Wildstang shirt, but I am looking for any I can get!

well my Gael Force is now no longer available

well arefin, i told you you could have one of mine… but you didn’t want a children’s XL :rolleyes: … that, and we’re technically not supposed to trade our shirts… :yikes:

Hey well after going through me collection of shirts i have found an extra vintage Gael Force shirt. PM me if you are interested. 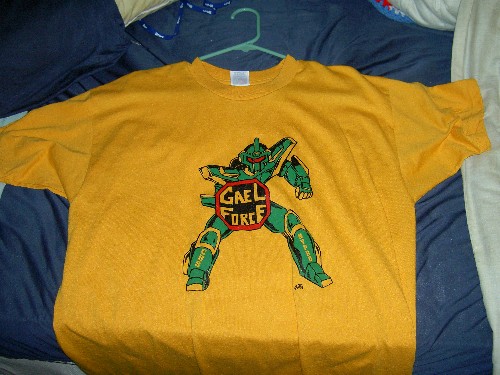 well arefin, i told you you could have one of mine… but you didn’t want a children’s XL :rolleyes: … that, and we’re technically not supposed to trade our shirts… :yikes:

I want a MOE 365 shirt. If anyone on thier team wants to trade me for a 108 shirt PM me of talk to me on AIM: linkinman8

anyone else up for trading now…