Interested in Mentoring a FIRST Team in the country of Libya virtually? We have 40 FTC teams that need mentors. 20 of these teams have never participated in FIRST before. 20 of the teams have competed in the first Libya FTC National Scrimmage in the spring and are eager for you to help them. Lybotics NGO which represents Libya FTC is now an official FIRST partner and they will be running their first two FTC Qualifying Regionals in Libya during February of 2022, which will be followed by a FTC National Championship. FTC and FRC Teams can be mentors for these 40 teams. Each team has an English-speaking member on their team to translate from Arabic. If you are interested, please fill out the Libya Mentoring Registration Form at https://bit.ly/2U0Sviu or use the QR Code in the graphic. More to follow once registered. 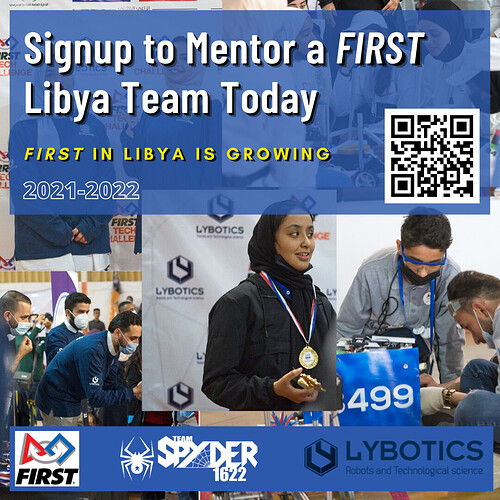 Team Spyder 1622 thanks you in advance to all FTC and FRC Teams for being part of our #FIRSTconnected and #SpreadtheSTEM initiatives by mentoring Libya teams! Team Spyder 1622 is on a mission to #spreadtheSTEM to countries through the world. Our global initiative has reached 191 countries and we’re working specifically with Lybotics as a USA mentoring coordinator supporting Libya robotics FTC events.

Congratulations on your initiative on making FIRST available for Lybian teams!
Good luck