Our team has decided on building a single flywheel shooter, but to make it consistent we’d need a 10"-12" thick flywheel.
How’d we go about acquiring something like that? Do we get 2" thick wheels and surround them with rubber?

Sorry if question is a bit dumb, thanks!
Tamir Cohen 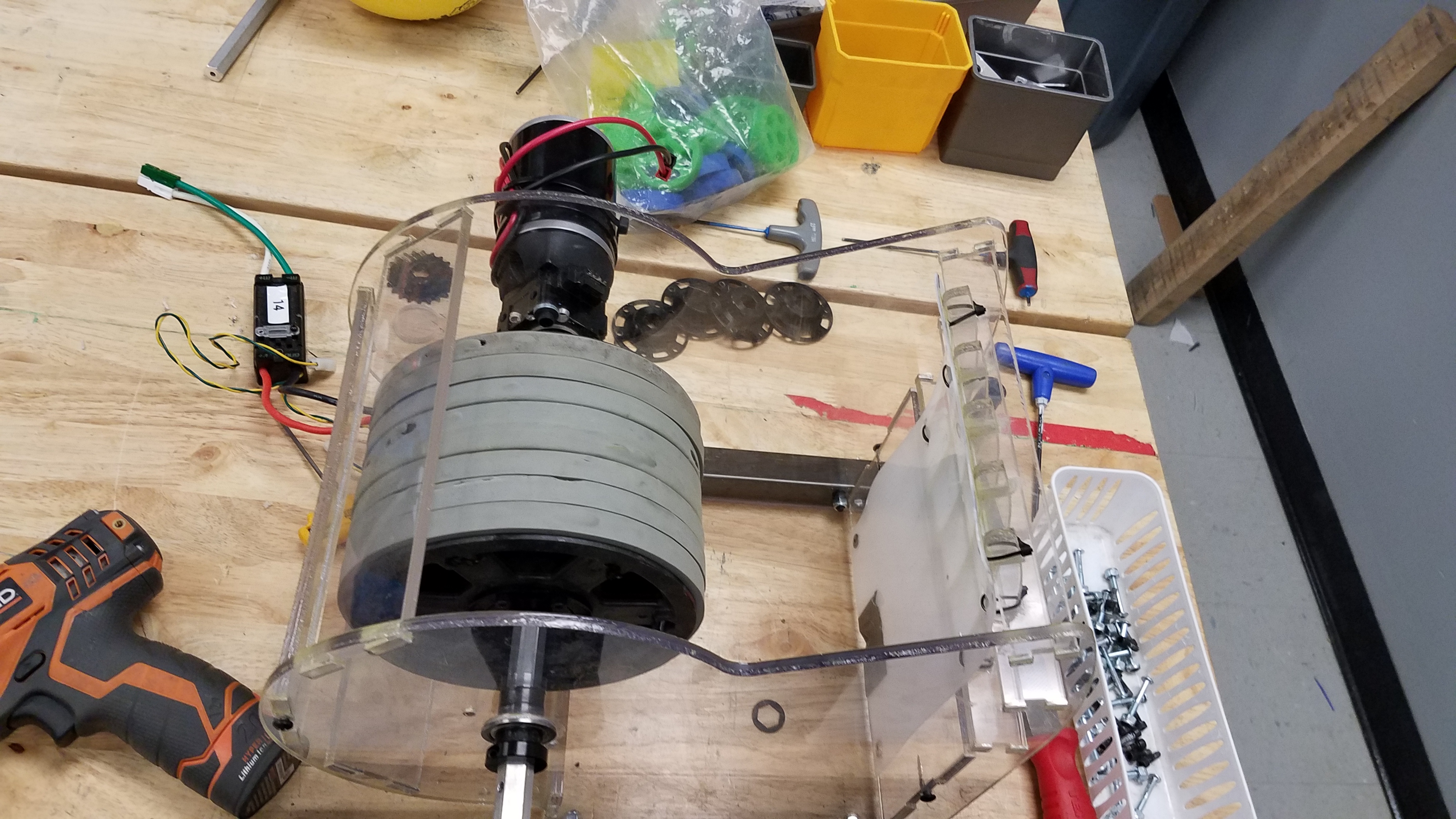 We ended up going with a hooded shooter made out of our 2017 ball tower turned upside down: [image] It’s running two 775pros at 3:1, black compliant wheels with big steel flywheels, and about 5" of space between the wheels and the .25" adhesive backed foam on the hood. We’re able to hit ~75% in the 2pt goal from behind the trench with the setup tilted back 18 degrees from vertical. Tilting back 30 degrees from vertical let us hit 30/30 in the 3pt from the TARGET ZONE. Unfortunately, I only …

Basically, find a wheel you like and start stacking them up.

If you’ve got the machinery, Buy a big ole hunk of metal and put a hex shaped hole in the middle.

Keep in mind for flywheel design:

The flywheel can be placed elsewhere in the rotational system (ie, off to the side). It doesn’t have to be the same wheel that makes contact with the ball.

Rotational kinetic energy is proportional to rotational velocity squared. Additionally, Moment of inertia is usually some function of radius squared. TL;DR - Making the flywheel go faster, or moving the weight further from the rotating shaft both have greater impact than increasing mass.

Not recommended: mount a clearance-rack stone grinder wheel to a hex hub, plastidip it, then claim to have created a “flywheel”.

Do I speak from experience? Maybe.

Would that be feasible – how wide is the goal? How accurate would the shooter have to be to get it in? (I get that this isn’t really the topic at hand but now I’m curious)

Making the flywheel go faster, or moving the weight further from the rotating shaft both have greater impact than increasing mass.

Thanks, but the purpose isn’t increasing the mass. Our “ball magazine” (stores and indexes the power cells) is pretty large to accommodate for our large intake and lack of mecanum wheels.

There is a possibility we will find a way to center the balls before they exit the magazine, but it could create vastly inconsistent shots.

This is Lilly, 95’s 2006 robot. She was reasonably successful, and could shoot 3-4 balls wide. Slightly different priority because game pieces were not limited. However, she’s a great example of ‘just unload game pieces as fast as you can.’ That is in fact 6 balls mid-flight! 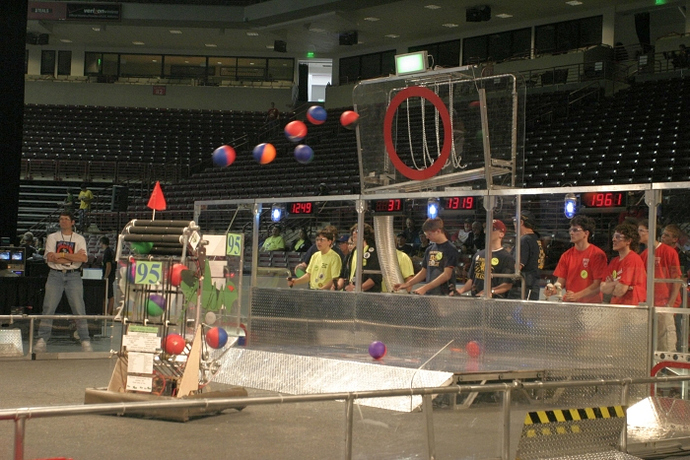 The goal is more than 4 power cells wide. It is a reasonable shot for a 2-wide target zone shooter. In fact, a team could avoid all of the difficulties in singulating and indexing power cells with a 2-wide thru-bumper collector, two-wide feeder, and 2-wide shooter. It’d be a 2-3 motor system capable of a great volume of 2-point shots with no deploying mechanisms outside of the frame perimeter, and easily packaged in a low or tall robot.

holy “thiccness”! I love the idea. To be able to shoot 3 balls at once, then drive back and cycle. Hmm those cycle times would be nice…especially if you can fit in the trench.

You could also use AM stealth wheels alternatively to VP traction wheels. There is only a slight raise in the center of the wheel, and they stack together extremely cleanly. Not sure which design is best for weight though.

Wait I might be reading this wrong but are you talking 10-12" diameter or length?

If you plan on doing a double wide shooter, consider putting a divider between where the two balls are. If the balls make contact as they exit the shooter there is a higher chance their trajectory will differ from your robot angle towards the goal.

Gotcha, I think I misunderstood.

Wait I might be reading this wrong but are you talking 10-12" diameter or length?

With how large the 2pt goal is I was hoping we’d see some multiball wide shooters that can unload 5 as fast as you can blink. Excited to see it!