I have a 1/2" DC12V solenoid valve wired to the PDP and PCM through a SSR. I have a flyback Diode integrated in the wiring of the solenoid. I have two 5 gallon air storage tanks that I can pump up to about 120 psi. In my code I have my pulse rate set to a fraction of a second, but when the solenoid is fired, its staying open for longer than the pulse rate. Is it a limitation of the solenoid? Does Pressure have to drop before it can close? Do I have to set some sort of off signal?

This is for a T-shirt cannon. We can get a really good shot off, then a moderate shot, and then we’re basically out of air. I think the next best step would be to route a regulator between the air tank and the tube to the solenoid, but if I could regulate just as well from switching the solenoid we’d be set to start mounting all the hardware.

I would check out the valve specs to see if they advertise a switching time and see how that compares to what you expect or are observing. Do you have a PN for the valve?

If it’s a single-acting valve, it’s also possible that it switches on faster than off due to resetting with a mechanical spring or other method.

I think the flyback diode is your problem. It slows down the decay of the magnetic field.

Try finding firing the solenoid directly from 12v, connect the ground wire well and then just tap the +12v wire to the solenoid wire and see how quick it closes.

I think a mechanical relay may be the solution. Use your SSR to control the relay with the diode in the control side circuit. The smaller coil in the relay should dissipate its energy quicker and thus decrease the release time.

Depending on the SSR you are using you might be able to get away with a resistor instead of a diode and further decrease the relay’s release time.

There are automotive relays that include a diode or resistor in their coil circuit.

None of my successful designs depended on the valve closing fast enough to “save” air pressure and I suspect you’ll not be able to mechanically do it.

I’ve always used a single tank that was consumed for each shot and recharged from a secondary pressure source through a fill valve (also electrically operated but only when the shoot valve is closed). This effectively gets you back to your operating pressure.

You need a fast opening valve but that doesn’t mean a fast closing valve as the mechanics to open quickly typically don’t lend themselves to fast closing against pressure. You’re opening actively and then counting on the passive energy captured by a spring in the valve to close and that’s always going to be less energy than was used to open it.

You need a rapid rise in pressure in the launch tube to get a good shot off - anything between the storage tank, the valve, and the barrel - like a regulator - will almost certainly work against you in terms of slowing pressure build up in he barrel. Too low of a pressure and the t-shirt starts to move down the tube and before too long (the dwell time in the barrel), it plops out the end, followed by your big woooosh - after it left the barrel and went 3 feet.

The small firing tank method is commonly used on filter cleaners; the industrial equivalent of the t shirt cannon. You could get away with filling it through a small orifice or via a FRC sized refill valve.

When we did a t-shirt shooter on my previous team many years ago we were able to successfully control distance (and retained air) by controlling the time the valve was open. Those were valves marketed for use in air suspension systems.

That’d be a nice valve to know about - have any references?

The valves we looked at just were all focused on speed of opening and where pretty soft closers.

We were able to get some modest “ranging” by varying the pressure in the firing tank. It worked OK - with all the other variables we really just had “max” and “not that much max” sorts of ranges - the shirt and how it was packed seemed to have a big impact on range.

If you want ranging I suggest having a main tank that is connected to a firing tank via a small air valve (probably with a manual throttling valve for better regulation). The firing tank has a LARGE port that connects to your diaphram valve that actually does the launching. The firing tank gets a pressure sensor.
Before firing you feed air into the firing tank and monitor pressure; once it gets where you want it to be, close it in. After that, fire when ready! You can also substitute controlled on time in the small valve for actual measurements…
Here’s a fancy sanitary firing tank that is shared with multiple pulse jet valves: 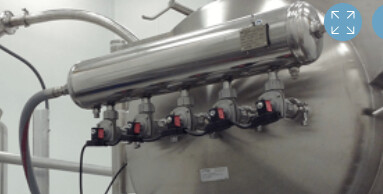 All the sellers seem to sell the same basic valves but here is one source.

They do have other orifice sizes, the nice thing is that these are serviceable with replaceable diaphragms and coils.