This happened to us a month or two ago.

Couldn’t you also gear it to where they both pull towards the “exit” but one moves faster causing it to correct?

In our test video they are both moving towards the exit, and one is going slower. As of today we are planning to power each side of the mechanism by its own motor so we can simplify the gearing/belting and have a variety of choices for un-jamming the mechanism if a jam occurs.

Mr. Gregory,
We are considering a similar design to your elevator plan in the drawing in which the second stage does not have a bar across it at the bottom. It looks like yall have a cross brace about mid way up to replace this bar at the bottom. We have only made one elevator in the past and don’t have enough material to make too many iterations so we’re curious if you have used this design before or have any examples of it. We are concerned about the stage coming out of the bearings.
I apologize if the question is confusing or inappropriate.
Thank you

if you have used this design before or have any examples of it.

We haven’t used something like this before. We spent some time discussing the climber yesterday and our current plan is to make the outer stage have multiple side bearings similar to teams that had a two way elevator last year (319 is a good example of this). That way it’s much harder the inner stage to twist out. We may also be making our inner stage from Sheet metal C channel so we can make the bearing distance longer if needed. We also plan to have some angled supports going down from the middle cross bar to the bottom of the rails to resist twisting.

Our controls Subteam has been working on several projects already this year.

Over the past few days we have been testing OpenSight and learning to implement a simple power cell tracker. 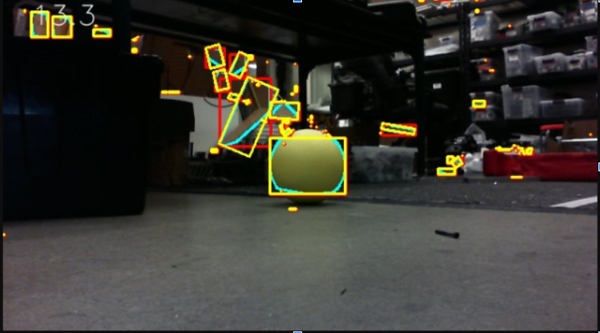 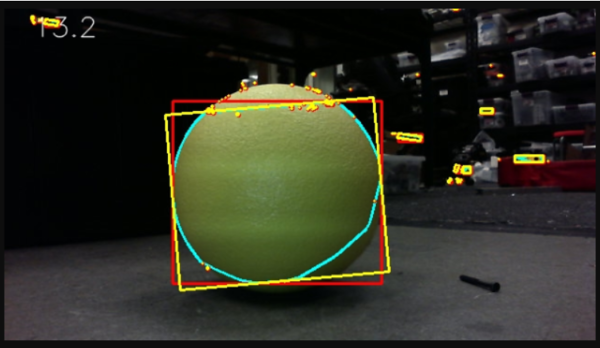 Several of our newer team members are working on building a version of the Everybot The Everybot is the model for teams with limited resources to design an effective robot. Every year there are teams that follow the Everybot documentation that have very successful seasons. Spectrum is building an Everybot so we can have a robot to practice with and we will also release any updates that we make to our version.

The kit drive base construction got under way this week. 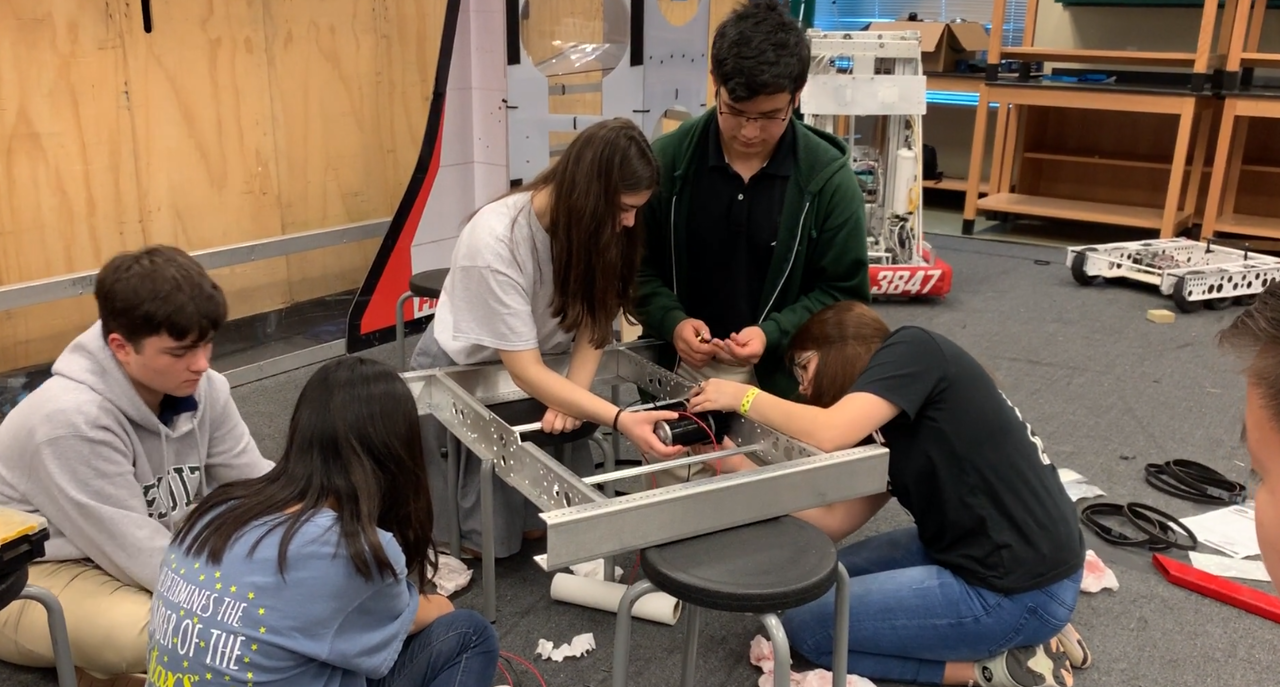 I cannot explain how excited we are to have some of our closest friends joining us in offering Everybot-related resources to the community.

Having new team members build an Everybot seems like a pretty good idea. Has Spectrum done this for a while or is this a new development for this season? Are there goals for the project? Very curious to see if this is something that could be used for an orientation if sorts to get a robot built for an off-season tournament with new members. Gives a bit more ownership under a different timeline.

Has Spectrum done this for a while or is this a new development for this season?

Last year we had students build our own MCC that was alright but less useful than we thought it was going to be. Since Everybot has a full CAD, BOM, and instructions each season we believe it will be easier to have new students follow the guides and then document any issues they run into. We also noticed we competed with a lot of Everybot style robots last season, having a good understanding of how they are supposed to be built will help us work with other teams at our events.

The Goals for the project are pretty straight forward

Tomorrow we will be testing some new shooter hood additions. We have yoga mat foam and PTFE sheet mounted to the hood.

We built a belt tower testing rig out of prototype so we can see how the balls react to each other and try to learn to prevent jamming mechanically in addition to control solutions that will come later. 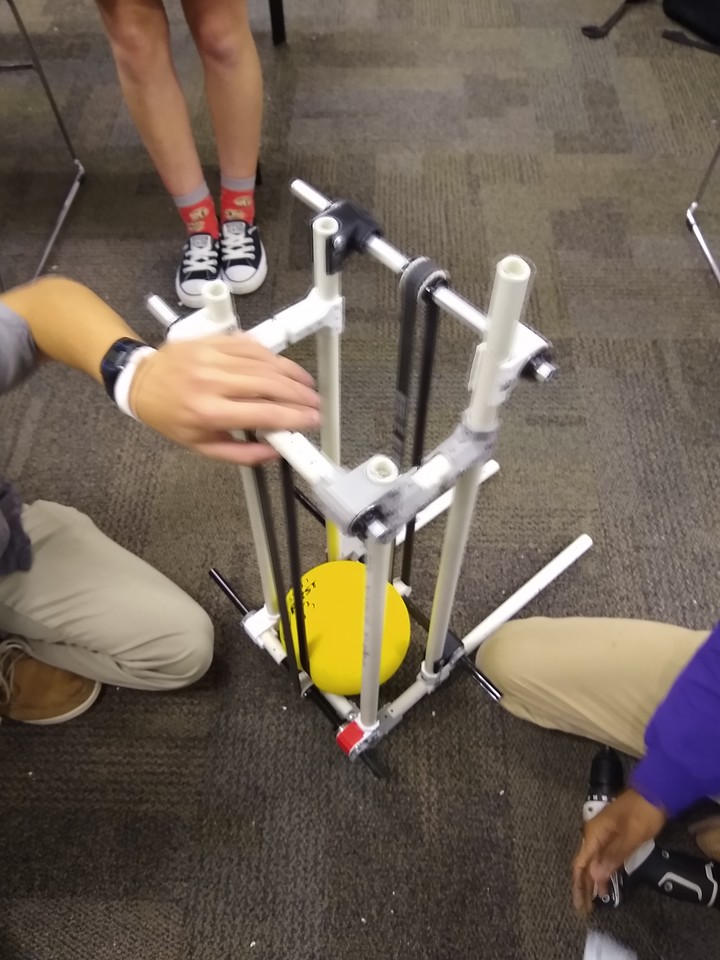 Opensight was setup today to stream two driver cameras to the driver station and was using less than 3Mbps to do so. The controls team also looked into some edge detection as well.

Is there any reason you are choosing opensight over chameleon vision?
Have you tested Chameleon?

We haven’t chosen anything, we are two weeks into build season, we have lots of time before our first event. A few posts up we discuss our testing of chameleon vision as well.

We did more shooter testing today. We made several changes all at once we normally try not to do but circumstances were somewhat beyond our control. The modified VEX traction tire we had been shooting with had a failure and one of the tires broke apart. We won’t be using that wheel anymore for our development of competition. It’s possible it was just our implementation but we will be going with a solid wheel from here on out. We moved to 2x 6x1.5" colsons wheels we had from our 2015 drive train.

We also changed the gearing to move the NEOs to 1:1.5 with a 36 tooth pulley on the NEO output and a 24t on the shooter wheel. We did some tests with the accelerator wheel on it’s own NEO and then moved to a setup that had the 4" accelerator wheel ganged together with the colson shooter wheels 1:1 and only shot using 2 NEOs. The smaller diameter means that the 4" wheel will have a reduced surface speed.

We also tested our shooter with a new backing of yoga mat foam and Teflon sheet. This backing still couldn’t let us nicely shoot ball #14 (a ball that has previously been sliced open multiple times in a belt prototype). Once the balls have enough cuts, rips, tares, and holes to vent at a similar rate to a new ball they become very hard to shoot.
Here is one of our tests. The one ball that lands short is the ball that has multiple cuts through the skin. It compresses far easier than the other balls and the yoga foam doesn’t seem to help.

After we adjusted the angle we were able to start hitting the 3 point inner goal from approximately the initiation line. This is closer to the planned angle of our current design for the robot.

The test fit of our drive gearboxes was done today. The competition versions will be 1/4" Aluminum plate but we can make sure everything working out of delrin or polycarbonate on our laser cutter. We are using a gearbox design inspired from this thread by Evan Morrison. Our implementation isn’t direct drive so we can simplify some things as we don’t need as much reduction. The 32:12 chain reduction to the wheels will get us a large part of each gears overall reduction. The spacers are 7/8" round tube with 3D printed inserts.

More of the design is starting to take shape.

The awesome people behind Everybot have released this year’s build guide and a brand new website. If your team is struggling to figure out what to build, building a robot based on the Everybot is a great idea. This robot will be effective in the 2020 FRC game for a large number of teams, definitely think about if your team should be one of them, it’s a really good idea. Maybe you have another idea for a ball mechanism but just want to use their climbing mechanism, that works too. No matter what reading through their documentation will make you better at building robots and give you new ideas.

What were the 2 exit angles that you were using for the shooter hood during testing?

What were the 2 exit angles

Honestly couldn’t tell you, we have found that the ball release angle and what angle we “build” the hood for don’t perfectly line up, so there is going to be many iterations of the production hood till we get the angle we want, that can score from the intiation line and then with more power score from further away (down side of the arc into the 2 pt goal) when needed.

Cool… so if I’m understanding correctly you guys are adjusting and tuning the prototype to find the near optimal hood angle so that you can use those numbers in the CAD… is this a correct understanding?

Yes and no, we are adjusting the shooter to make sure we have a good understanding of how the balls interacts with the components we plan to build into the real shooter and to make our first attempts at a production hood closer to correct. A lot of what we are doing is figuring out what doesn’t work and trying to figure that our quickly with inexpensive materials. Then on the prototype robot / practice robot we will be able to mount close to spec versions and test multiple iterations of those before making a version for the comp robot. Then during the season the comp robot and practice robot will be continually updated to improve as we learn more and more details about the balls, the game, and the mechanism we have built.

Is the CAD for your 3d printed pulleys for use on polycarb rollers posted on your CAD site? Looking but don’t see it / can’t find it…

Is the CAD for your 3d printed pulleys

Yes it was linked in the description of the roller.