Once we decided we would shoot opposite the direction of our intake, we no longer needed to shoot over our climber. This allowed our climber to be at the full 45" height at the start of the match, so we needed far less extension and thus the drawer slides were no longer needed. A single stage, chain powered lift, is far simpler for us to build and maintain.

Very cool idea for the climb system! Have you tested this prototype/idea? There are many steps in order to climb with another robot

Im glad that youre using Chameleon Vision (because Im one of the developers). Can you publish your experience with Chameleon Vision in this CD thread so other teams will consider using it. As its new for this year, not a lot of teams have used it or even heard of it.

Anyway, Thanks for sharing your team progress and for taking your time to create this detailed CD thread and answering everybody’s questions!

Did you try to time it?

We can once we have more testing.

What is the range of motion of your elevator? What is the height when its collapsed versus when its fully extended?

What is the range of motion of your elevator?

Seeing is as it’s not designed yet it’s hard to say, but our design goals are for our latches to start somewhere from 28"-30" off the ground and be able to latch on to the pole at 63"+ some wiggle room.

The new intake plan, allows for balls to rapidly be brought into the robot with a wide intake, and set quickly into the tower using a powered V similar to prototype videos from FRC#6135, FRC#4481 and FRC#95 . We plan to prototype some variations of this idea by adding a central channel for balls to rolls straight down and possibly a powered belt to move balls towards the tower belting as well. We will test various options for the side conveyors/wheels and also speeds and direction changes.

The tray on top of the intake is designed so this robot would be able to load from the human player station with the intake down. That should allow us to intake balls on the ground and then quickly get any remaining needed balls from the loading bay when drive in. 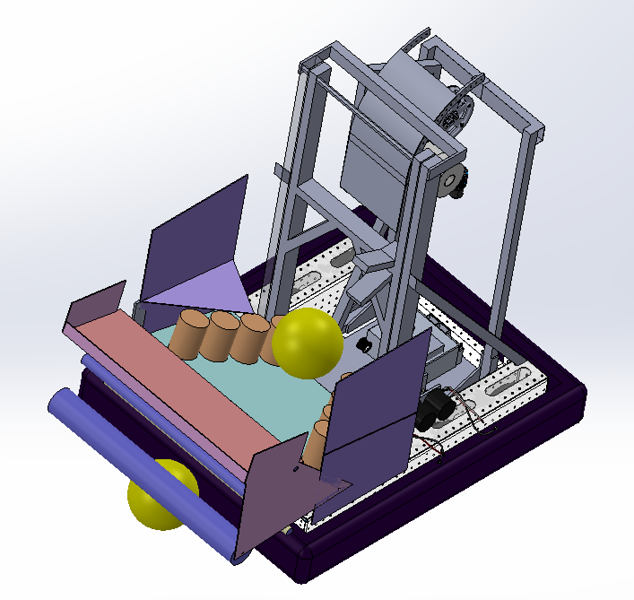 When retracted the intake acts as a cage around any balls remaining in the funnel to not allow them to bounce out of the robot as we drive over the boundaries.

We have prototypes of these systems under constructed and will post video and photos when they are operational.

Terrific update. Thanks for the insight.

Currently we are stacking multiple 6" drive train wheels as a shooter. It works, but is not the best approach for weight and inertia.

Currently testing with a very wide VEXpro 6" traction whee (lots of tires stacked together on a printed slicel. We will also test with 6" colson wheels.

Every time I look at your prototypoe shooter I admire how flexible it is to test! Ours definitely takes much more time to rework different configurations.

flexible it is to test!

Flexibility is actually causing some of our issues, our hood isn’t rigid enough for proper testing, we are continuing to improve it.

Ah thank you for the info. I was feeling bad it takes us an hour to reassemble any changes.

Not to hijack Allen’s thread, but if you are looking for some suggestions we had good luck with rapid modification using a shooter prototype modeled after one in the 254’s 2016 Notebook. 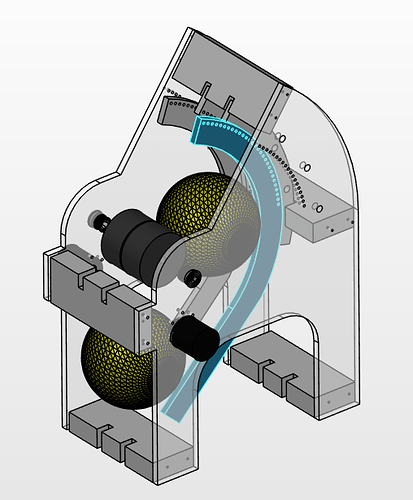 Everything is fixed except the actual back cowl parts, one of which is highlighted in blue above. You can change the compression, backing, and release angle by just changing these out for different ones with a couple of bolts. This was designed around laser cut 1/2" plywood (because that’s what we have), YMMV.

It’s still in evolution, but something like 2 geared up NEOs running closed loop control was pretty happy. Not shown in CAD was we pretty quickly realized looking at the logs that we needed more inertia so the actual set-up has a pile of gears also on the shaft: 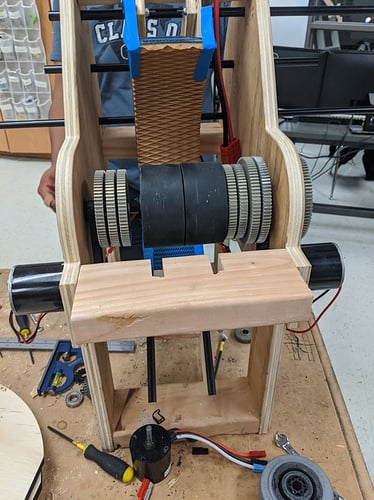 Not to hijack Allen’s thread,

Hijack away, Rachel, especially if it’s good ideas. Thanks for the ideas, I’ll pass along to the kids that have been doing our hood and see if we can incorporate some of the ideas.

This is what we’re building, basically. This is plagarism

The similarity we’re getting to a lot of the #openalliance folks is uncanny. We haven’t even been paying too much mind to y’all and we’re getting the same basic robot shape…

Either great minds think alike or we’re all sheeple-ing along.

Thank you for the information. We aren’t a strong cad group but our test setup is getting closer to that naturally though starting to have alot of holes drilled by hand that we’ll probably remake them.

A group lesson learned in foresight on the prototype adjustment.

Always excited to see a build blog especially from 3847! Looking good so far

The shooter prototype was updated with a more rigid hood and basic velocity control on the NEO motors. It’s shooting with 2 NEOs powering a 6" wheel 1:1 at 5000 RPM and a 4in accelerator wheel powered by 1 NEO 1:1 at 5000RPM. We plan to update the shooter to gear the main flywheel up so the NEOs have more power head room to maintain an RPM of around 5000. We also may test powering the accelerator wheel off the same two NEOs that are powering the main fly wheel.

Our newest intake prototype is meeting all our expectations for an intake. The balls are rapidly moved up into our robot and our new indexer should be able to sort out the 3 wide balls pretty easily in the unlikely case we are intake 3 balls all sitting next to each other.

The indexer prototype based on FRC#6135 is working flawlessly. 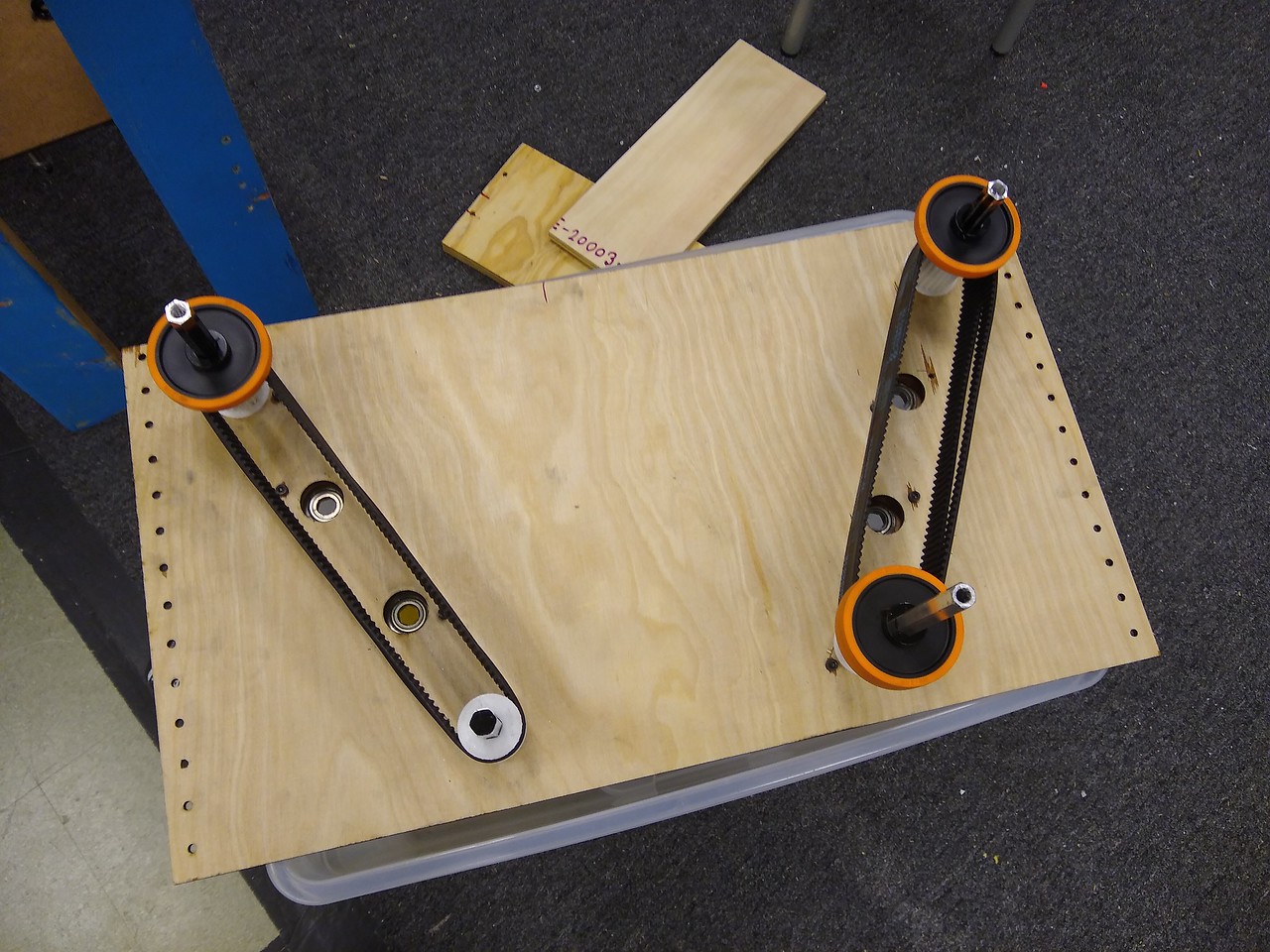 Video of it working without intake

More Pictures and Video of all the systems are available in our photo gallery.

The roller setup we have been using in our prototypes are based on a system we developed for our 2019 Cargo intake. We plan to use it again for our Power Cell intake.

The system has 6 parts

The shooter prototype was updated with a more rigid hood

Do you have any close up photos of how you made the hood more rigid? Thank you for these posts!

Do you have any close up photos of how you made the hood more rigid?

More standoffs and aluminum ones, plus larger center ribs. 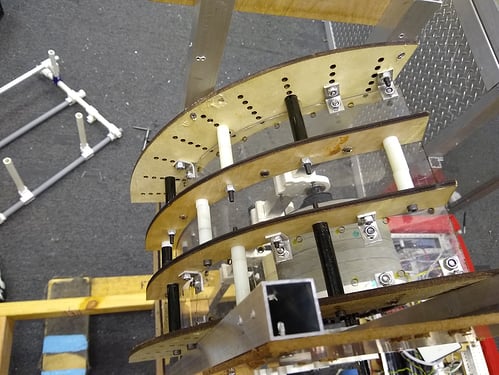 Quick question, how do clamp on pulleys work?

Just two parts, bolts and locknuts clamp it to the polycarbonate tube. 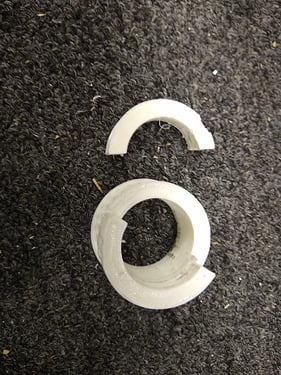 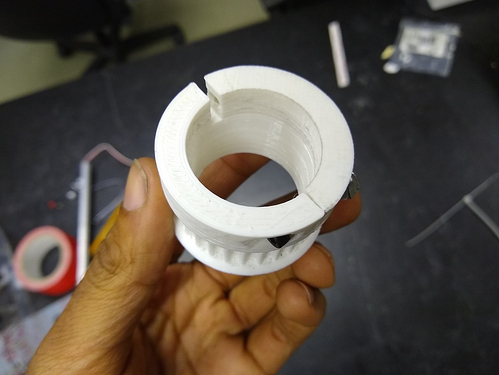