I am also very excited about seeing this climber come along. What is your team deciding to use to power the winch? I’d imagine it’d be on par with a 2017 climber in terms of power, maybe less. And any time estimates for the climb? I think it’ll end up being pretty fast considering the deployment of the arms is just two cylinders and the winch doesn’t need to pull that much. Just not sure how the robot swinging is going to affect it - might need to add some wheel tread on those hooks. For next time!

What!!?? No one was exclaiming “Success on the first try!”?

I am really looking forward to seeing this in Pasadena in a few weeks.

What is your team deciding to use to power the winch? I’d imagine it’d be on par with a 2017 climber in terms of power, maybe less. And any time estimates for the climb?

The climb will start being powered by 2 Falcon500 motors, most likely into MAX Planetary gearboxes to begin with. It is similar to 2017 climbers in that year we ended up with 4 775s on our climber by championship as we kept working to improve the speed. It’s possible that we will do that this year so we are designing it in a way that we can easily change the gear ratios and possibly add more motors if we decide we need it.

And yes we do plan to add rubber or other material that has a high CoF with the steel bar to limit the swinging.

how exactly do you plan to stay within the frame extension limits with your double climber arm?

Here is a sketch of the design showing the 16in extension limit on the left. With the arm fully folded out it is still well within the limit. Once that arm and hook have depth they will likely be closer to 2in away from the limit but still plenty of room that we aren’t worried. 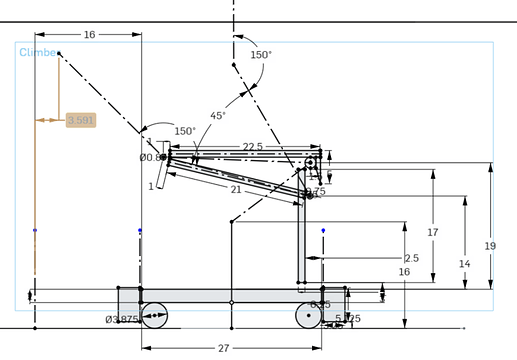 We added a crossbar between the hooks and moved our string to pull from around the lower arm pivot shaft and pull on the crossbar. This allows us to pull down closer to a straight line from the hooks to the spool. We also added some pool noodles so that if (when) this chassis falls off the bar it won’t be damaged as badly. 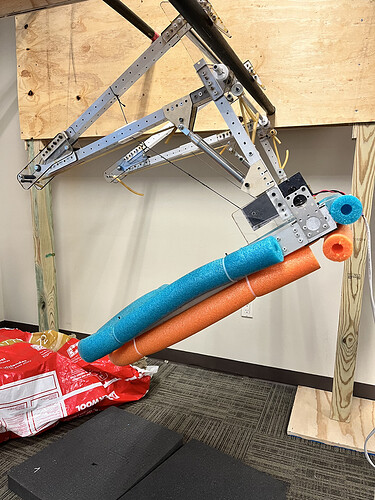 After some more testing, we were able to get a successful climb sequence. 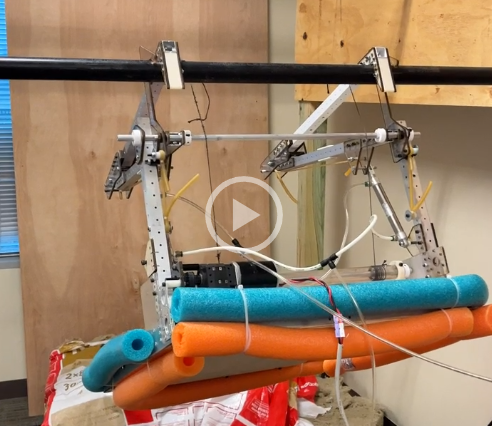 This version of the prototype doesn’t currently work when we added weight (35lb plate) because it’s powered with a timing belt, the competition one will likely be chain or gear driven. This climb also takes the robot to a full latch on the traversal bar which in our current design this likely brings part of our bumper above the high bar (a G108 violation) so we will only pull off the high bar and hang from the top hooks in a real match. 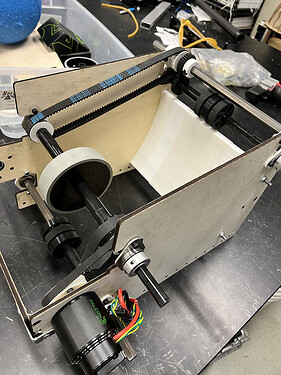 Our launcher prototype is coming along and we should have some test video coming soon. The current plan is a flywheel with a top roller, adjustable hood, and turret. If we need to reduce features they will probably keep that priority order, the turret is nice to have but not necessary, the hood could be simplified to 2 positions instead of continuous, and the top roller should allow us to launch balls into the goals with less energy in the ball when they enter to reduce bounce-outs.

Are you planning on having the main flywheel and the top roller mechanically connected, or separate and controlled in code? One idea that’s been discussed is to test with the flywheel and top roller separate and use code to dial in on a good ratio between the two. Then, in your final design, mechanically connect them with that ratio or as close to it as possible. From looking at just the speeds this makes sense but from a forces standpoint I’d think imagine all the load being on one gearbox vs. two separate gearbox would change the shot, how you tuned it, etc.

Are you planning on having the main flywheel and the top roller mechanically connected, or separate and controlled in code?

We are planning to drive the top roller with a belt and gear set from the lower rollers. We did this on our 2021 robot and it worked well. Our current plan is for the top roller to have about 2/3s the surface speed of the lower roller to remove a good amount of the spin on the ball, will adjust that ratio during testing. We plan to use large enough pulleys and gears that we can print/buy various combinations to tweak the top roller speed as we iterate. 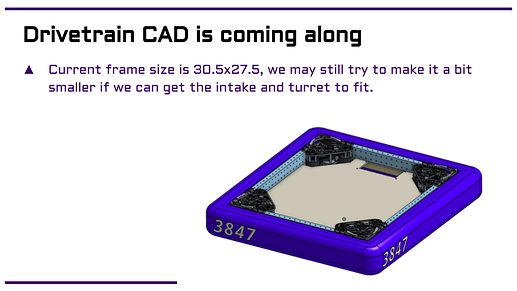 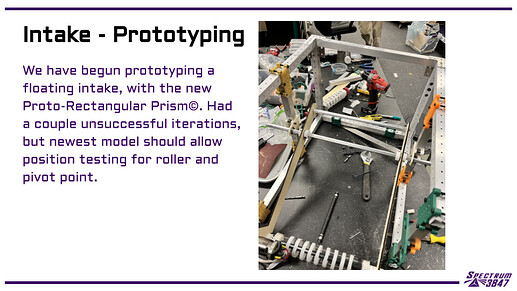 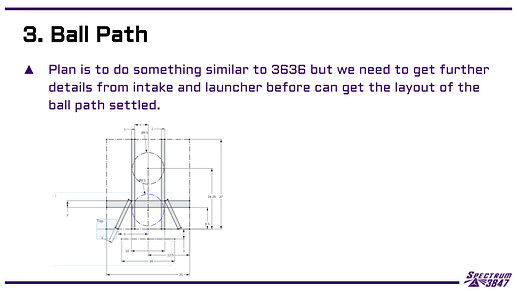 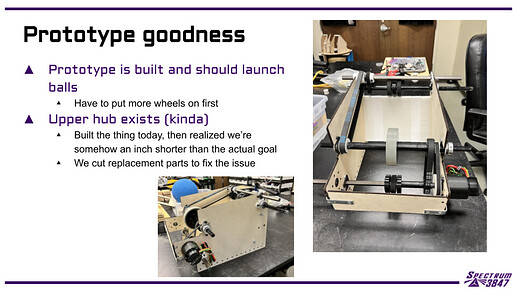 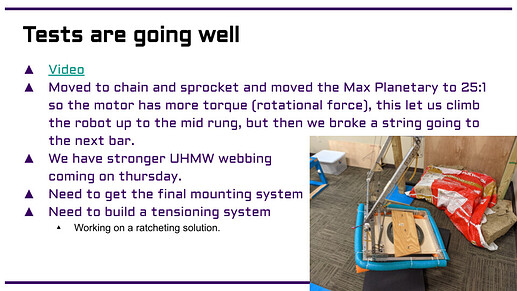 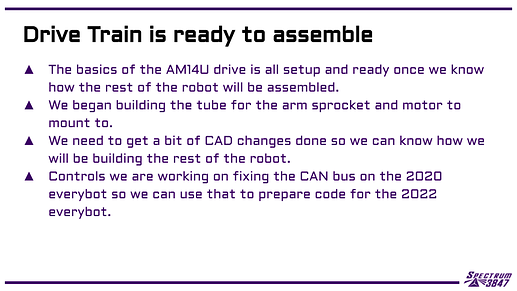 This is our first true build season using OnShape, so we are still learning the best way to do some things but we will have our documents shared starting now. We are not very far into CADing the robot, it won’t be even near completion for about 2 weeks. The prototypes document has most of the files and sketches we used for making the climber prototypes but it’s very disorganized. 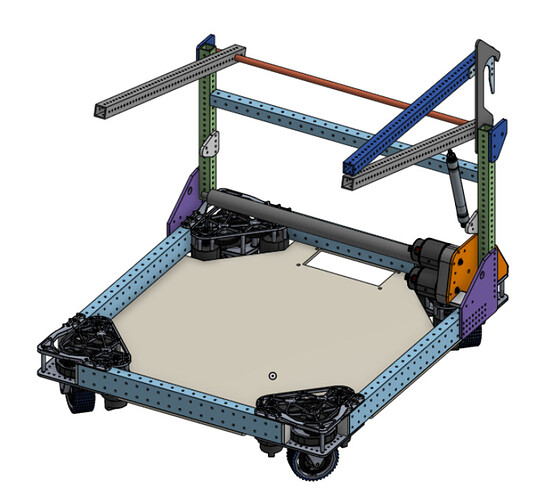 0. Infrared 2022 (Top Level Document)
1. Drivetrain
2. Intake
3. Ball Path
4. Launcher
5. Climber
(6 is controls and doesn’t have a document yet, most of it will be in Drivetrain)
7. Prototypes and Sketches

We filmed a good amount of prototype launcher testing today on the replica Upper Hub with an agitator wheel installed (it wasn’t turned on for all the testing, it’s loud, and we didn’t notice a difference in much of the testing off or on). We tried to film as much unedited testing as possible, so there are a lot of clips. Hopefully, this will give people an idea of how the balls interact with the goals. 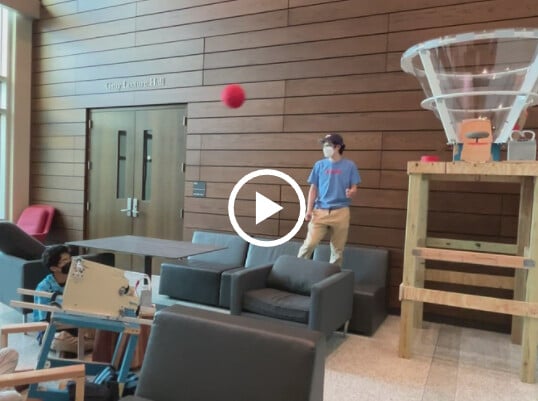 More Videos can be found in our Week 3 Gallery.

It would be cool to be able to compare that to not powering the secondary launch wheels (simulating a hooded shooter in some sense). There have been some videos of hooded shooters but none could be directly compared to a double wheel. If its possible, I recommend launching from roughly the same position and not powering the second wheels and seeing what happens for science.

How much squeeze on the cargo? Curious if you had to adjust after reinflating the cargo to the correct psi.

8" between the two sets of wheels, and didn’t adjust compression based on inflation.

Our design is planning to have the top roller wheels so we likely won’t being testing this. We will post if we do test it, but it would require building a new prototype to get a similar launch angle and we don’t have the resources or time to test things we don’t plan to use.

Great videos and resources. Thank you!

Notice how there is very little backspin on the ball. This will really help reduce the balls bouncing out of the goal.

Allen, can you provide any details on the test bed that you’re using there? It appears that your student is adjusting the RPMs manually on the board.

Allen, can you provide any details on the test bed that you’re using there? It appears that your student is adjusting the RPMs manually on the board.

Sure that board is a PDB (the old blue one), a battery box from an old robot, a 120a breaker equivalent from AliExpress, and a cheap servo PWM tester. (Like these https://amzn.to/3g4kxRk). The board also has three original Talon motor controllers on it for working with brushed motors.

What was your take on why there was such a variation in shot power? Do you think it was the balls or something you can tune with the shooter?

Wow, that’s working well! I was wondering if you could explain your rationale for using compliant wheels on the top roller and what durometer wheels you used.

That’s really easy, we didn’t have enough 2" stealth wheels to test with. The real robot will likely use a rigid wheel/roller. I’m not sure the durometer they are circa 2017 WCP wheels I believe.

It would be cool to be able to compare that to not powering the secondary launch wheels (simulating a hooded shooter in some sense).

Just a quick note about this - free spinning wheels on the top of a two wheel shooter will result in noticeably different performance than a rigid hood, particularly if that hood is designed to grip onto the ball at all. It’s the difference between rolling a ball and pushing - tossing it. A closer comparison would be to lock the top wheels.

What was your take on why there was such a variation in shot power?

I’m not sure what you mean by variation, some of it was just us adjusting wheel velocity.

There were a few instances of balls coming out short that we can’t explain yet, the position of the valve on the ball as it feeds in to the launcher plays a role, ball pressure plays a role, the fact that our prototype is sitting on a stack of wood and wobbles a bit plays a role, and this isn’t a velocity controlled wheel yet is probably a big factor.