Spectrum is back for our 12th build blog. Our robot this year will be named “X-Ray 2023”

With many of the robot rules now evergreen, we did a presentation on the rules ahead of the kickoff to give our students a good understanding of the basic rules. This may be a good thing to have your team listen to before Saturday.

We updated and added to our Design Training Slides. We haven’t gotten a chance to record videos for these, but the slides should be helpful.

Spectrum has a relatively flat organizational structure. We don’t have any year-round captains or specifically assigned subteams, etc. During the season, we have system leads for hardware and software. We try to limit it to 5 systems, with each of these systems normally led by 1 or 2 students. Here is how the breakdown normally works.

Excited for this blog as I am every year!

Immediately yes. One of my favorite threads every year. 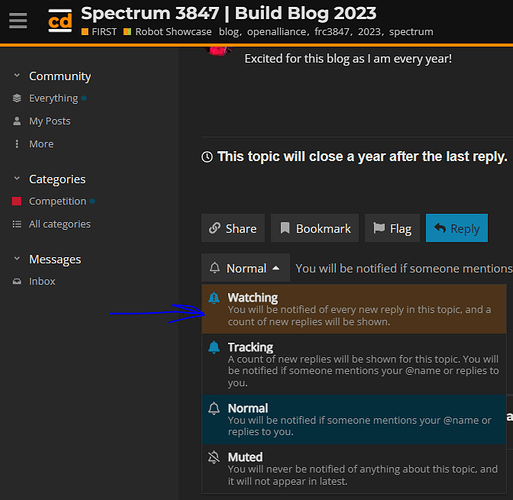 One of our larger projects this fall was creating a plan to restructure our software to make it easier for more members to be involved in software development.

The main idea was to make everything a system (subsystem), so auton, pilotGamepad, operatorGamepad, vision, etc., are all considered systems in our structure. Each of the systems has its own folder, its own config class for constants, and its own commands class (and possibly a folder for full command classes). We attempted to split more things out of the default subsystem class so they can be updated and version controlled separately. An example of this is having a separate folder for trajectories/path planning outside of auton or swerve.

Some other things that have changed or been added

2023 Software Changes Notes these aren’t all fully implemented or detailed here, but this is where we were keeping notes as we went through the process of overhauling our code structure this fall.

Our Flash-2023 Repo is the code for our swerve test platform that uses the new structure. So far, it has been working well, but without a full season, we don’t know what bugs will turn up due to these changes.

OnShape link to the belt generator we are using to make our belt models: Onshape 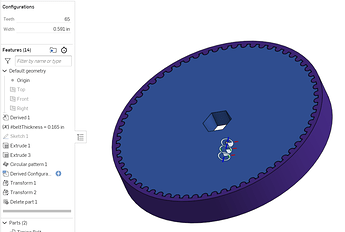 Allen, do you think printing belts is worth it over investing in a few hundred dollars in belts from v-belt guys in 5 and 10 tooth increments? If so, I’d love to hear your reasoning.

We did that this fall after @Boomie-7492 did something similar.

This is what we ordered and the totals: 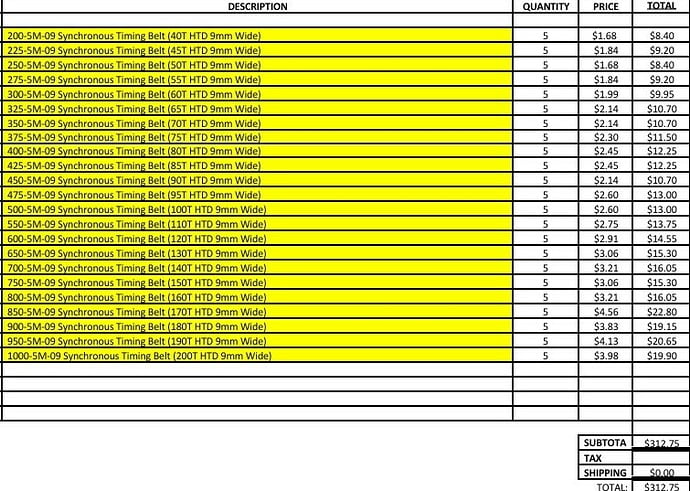 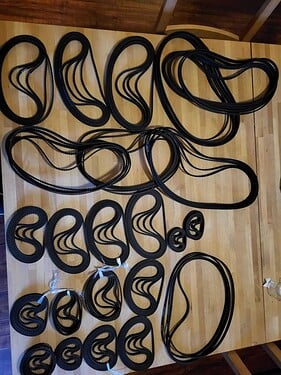 We have found that some our designs need odd sized belts that we don’t want to stock. Stocking belts at 5 tooth increments is probably reasonable, stocking at 1 or 2 becomes less reasonable a lot faster.

Interesting, I’ve never felt the need for finer granularity in belt choice beyond a 5 tooth increment.

We also designed an elevator during the fall, like many many teams. Ours wasn’t designed specifically to be a model of how we could build a competition elevator in 2023 if needed. It was designed to experiment with a few different elevator ideas and be a useful training tool for robot assembly. 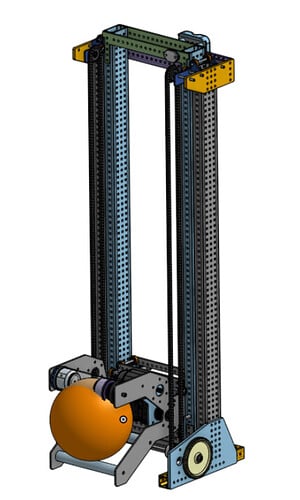 This elevator can either be run in a cascade setup or, as modeled, set up so the first stage motor and the carriage are decoupled and can be controlled independently. This could let you have a starting position with the carriage at the top of the robot or allow for specific over-the-back designs. You can also gear each stage for different speeds/power. You could have a very fast carriage used for most of the scoring and a slower 1st stage used for climbing and some scoring.

The carriage is raised and lowered by a belt running from the bottom to the top of the 1st stage that isn’t modeled in the CAD and powered by a motor on the carriage. This design took some inspiration from 1114-2019 with the sprocket and chain on the front side of the elevator. This design is also inspired by 971-2019’s thin polycarb cable carrier method. 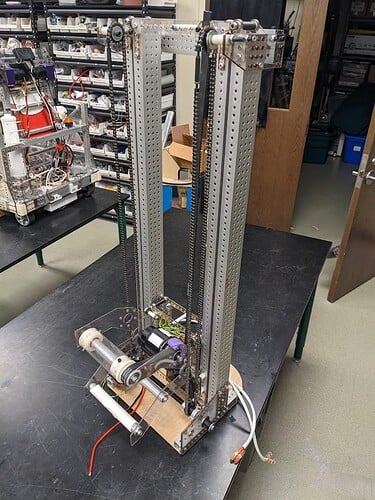 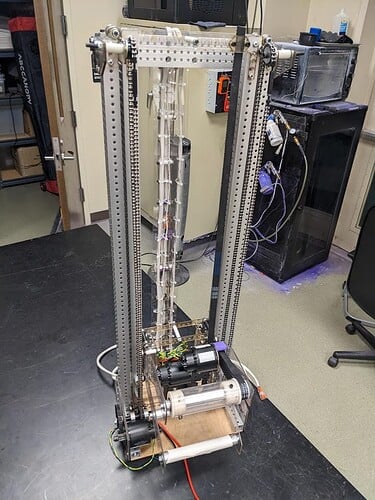 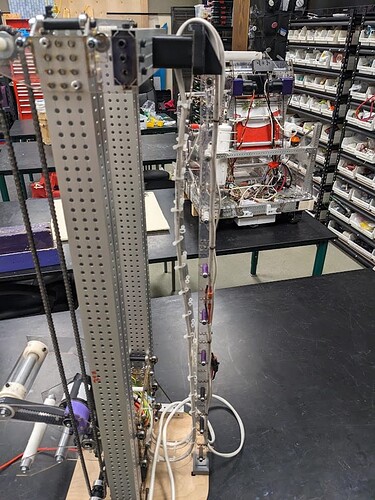 We completed our initial priority list of tasks for the 2023 game. 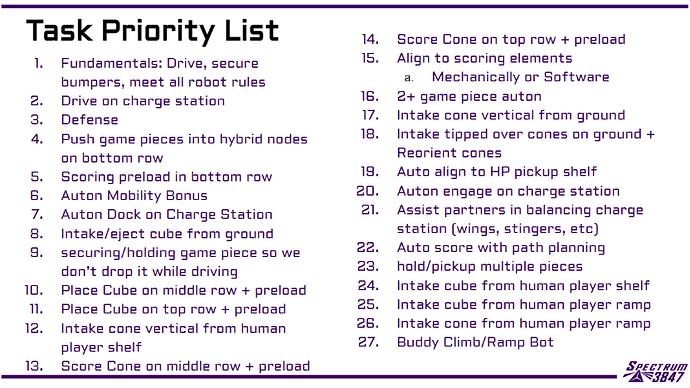 Cones from the shelf or the floor.

From what we have seen, we are currently a lot lower ground pick of cones than many other teams. Here are a few reasons that we discussed today. 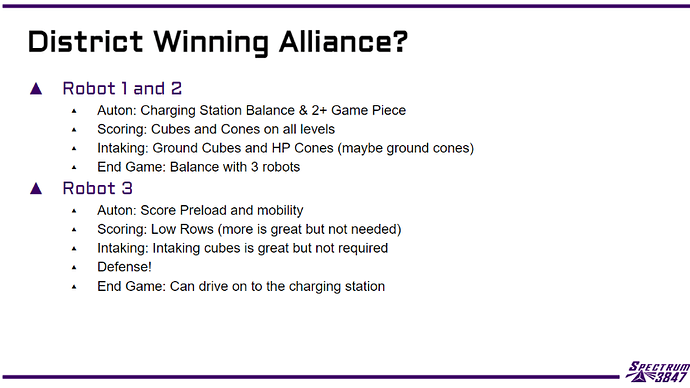 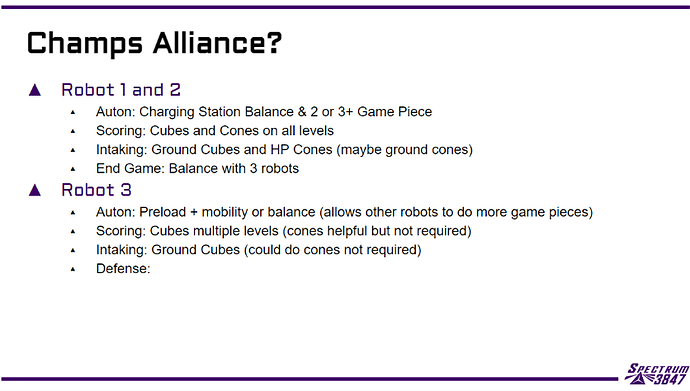 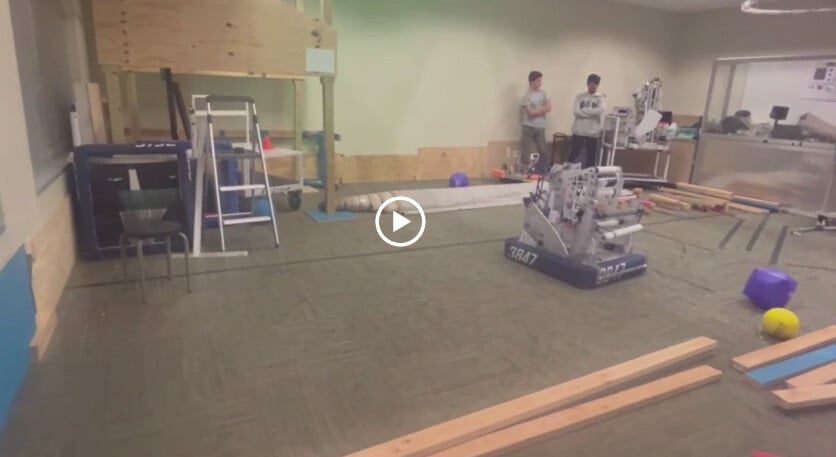 Is a stinger type device legal this year? If you push a stinger down to balance the ramp, when you transpose your robot onto a flat floor you would be violating bumper rules.

You are correct we have that on our list of things to Q&A and haven’t done any design work or put much thought into it yet.

To be more precise we are going to Q&A that if extensions that deploy below the robot that can’t support the weight of the robot will still be legal. For example, a robot with suspension could have bumpers that when measured from the bottom of the wheels when lifted off the ground are more than 7.5in but when placed on flat ground they collapse and bring the bumpers within the zone. A relatively weak stinger type mechanism could be deployed in a similar manner and not break the bumper zone rules.

We began making some of our field elements and talking more about possible designs.

What happens when a 2022 robot runs into a cube? Watch till the end 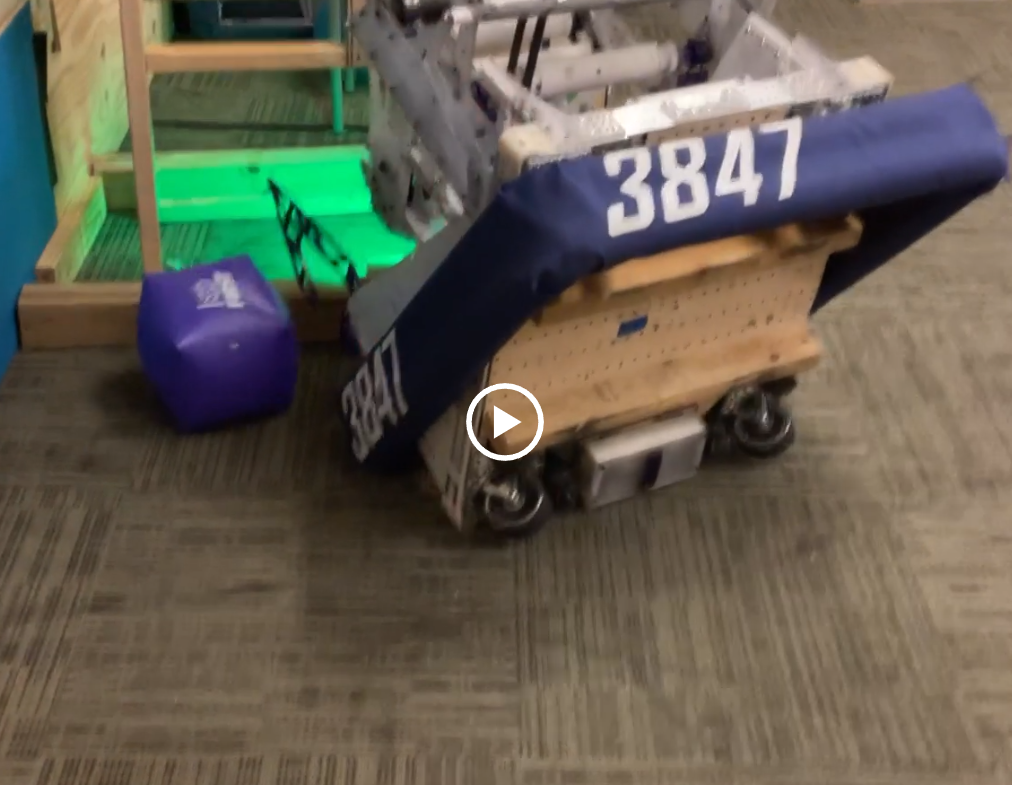 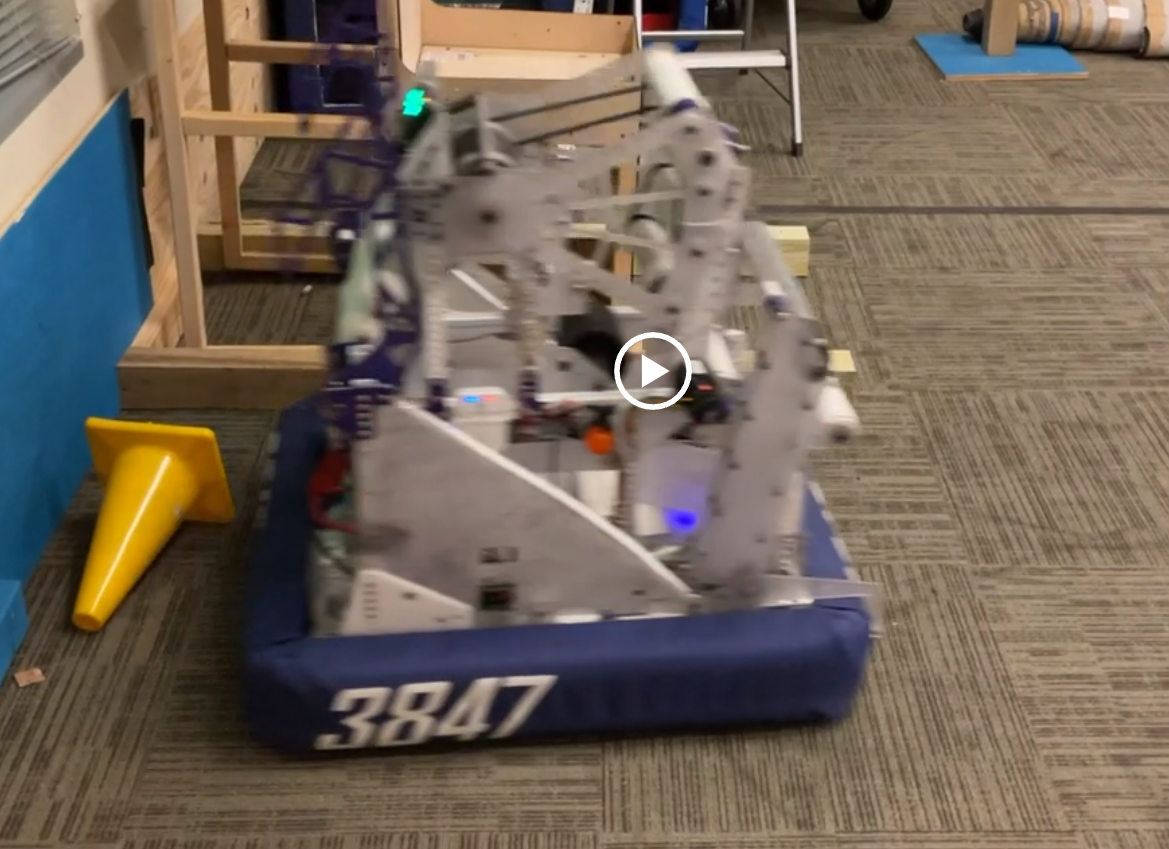 Scoring the cube with Infrared 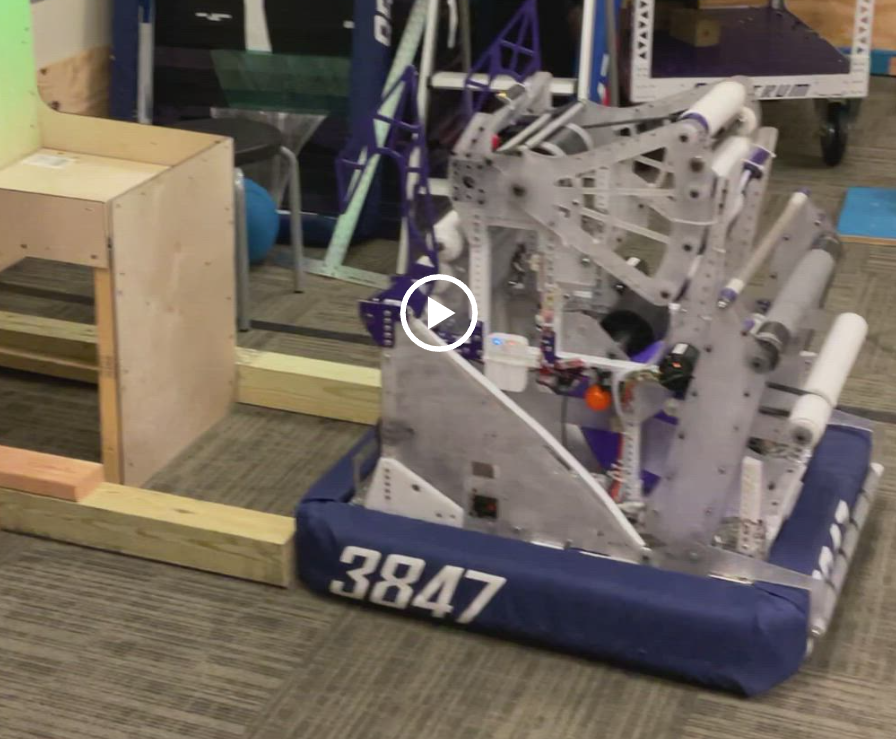 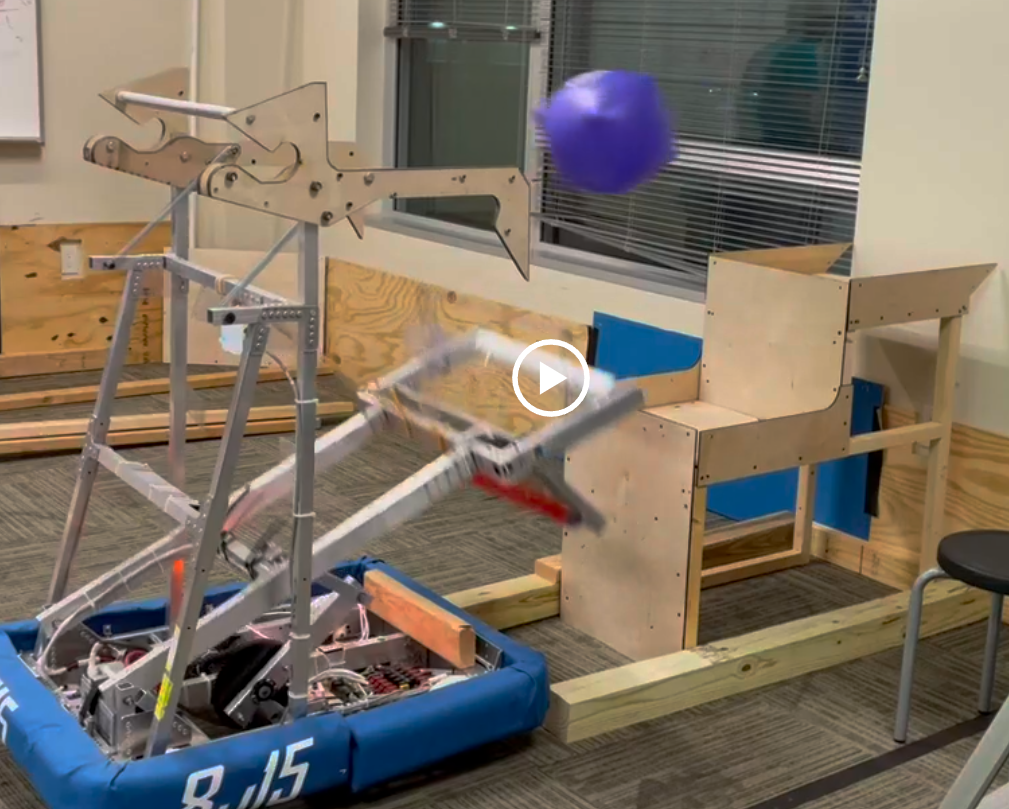 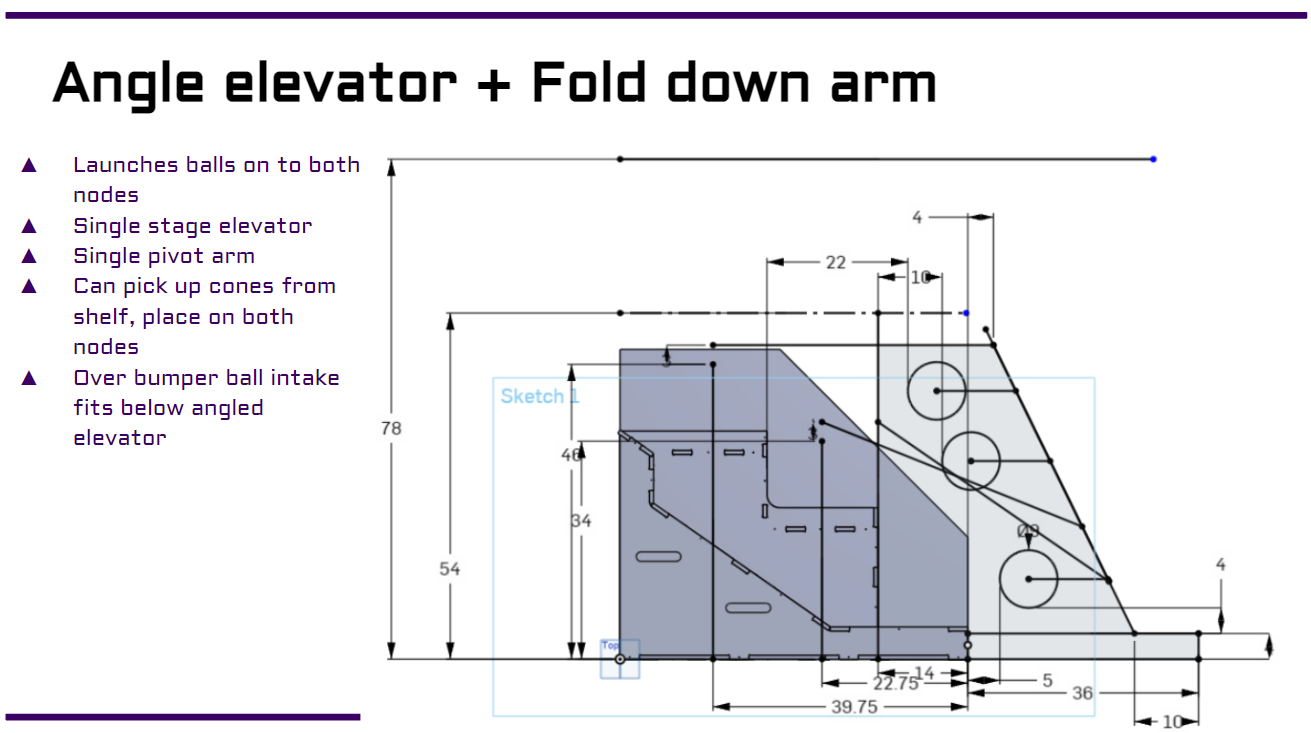 The robot popped before the cube did!

We tried this and didn’t have any issues, we even tried driving into a sideways cone from all angles and didn’t encounter any problems whatsoever, just pushed the cone around (using swerve mk4i, 1.5" bumper height)

Is it just me or is the video for 8515 not working? it looks to just be an image for me.

One of our students devised an elegant solution for a game object mechanism that deals with both balls and cones. The circles are tubes, and it intakes cones from the top. Here is a very early prototype: 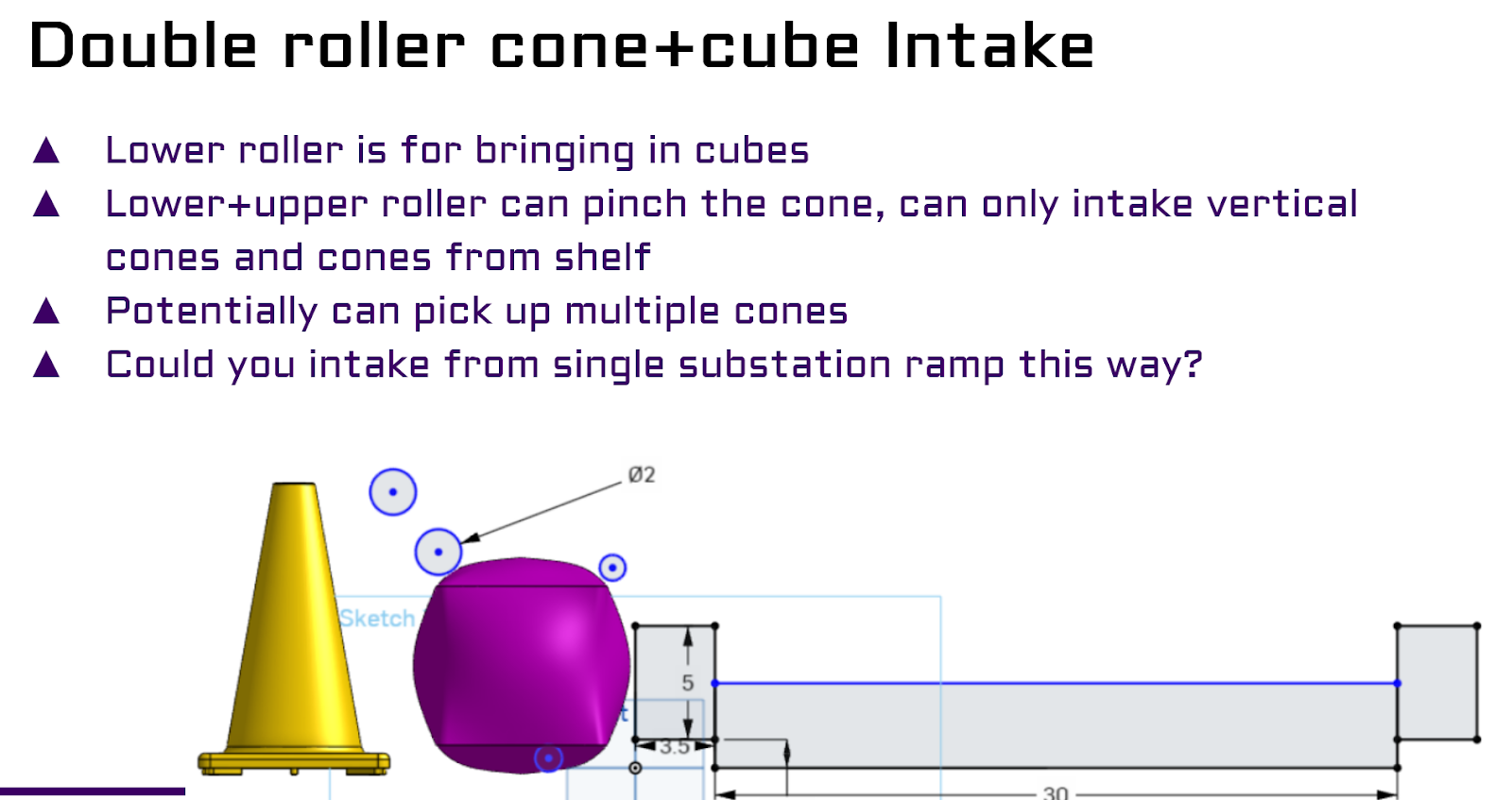 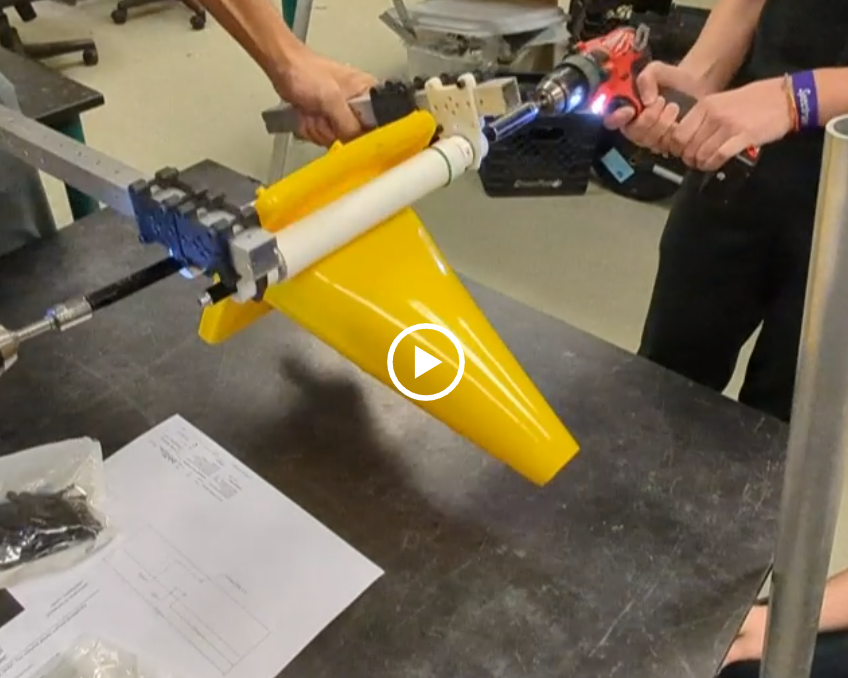 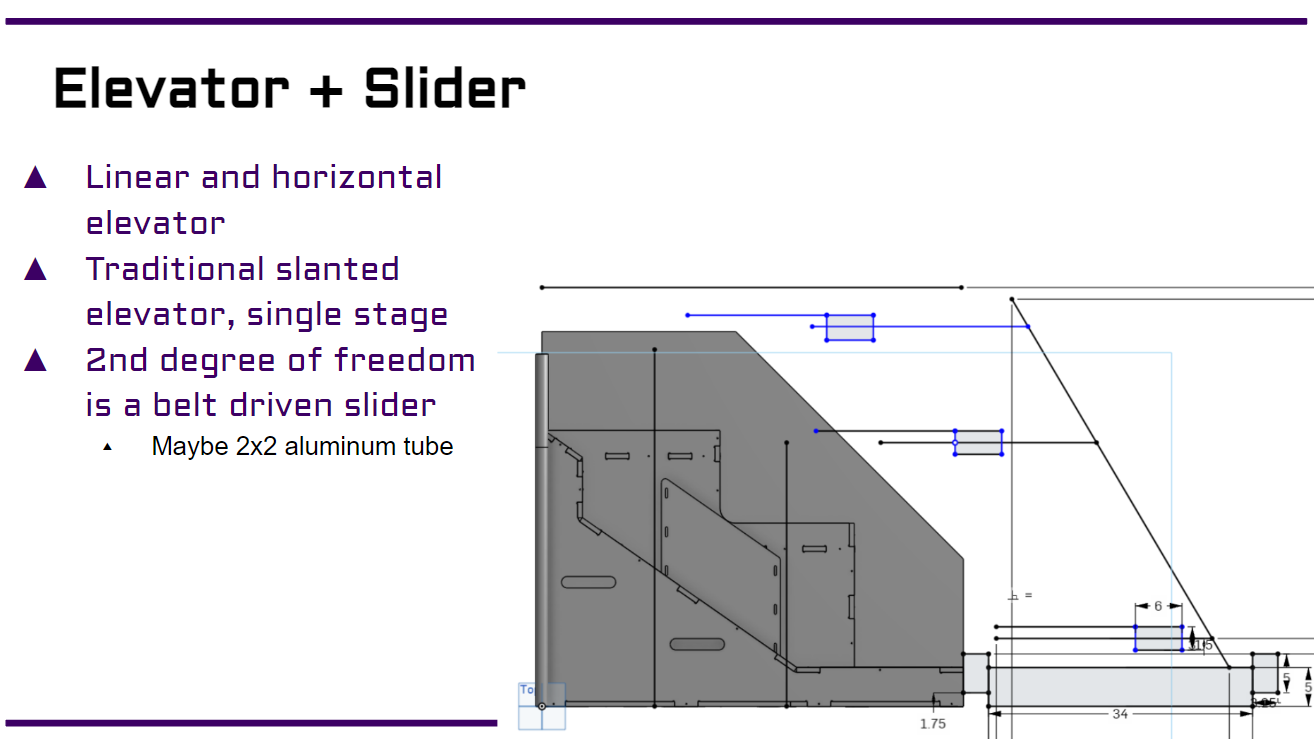 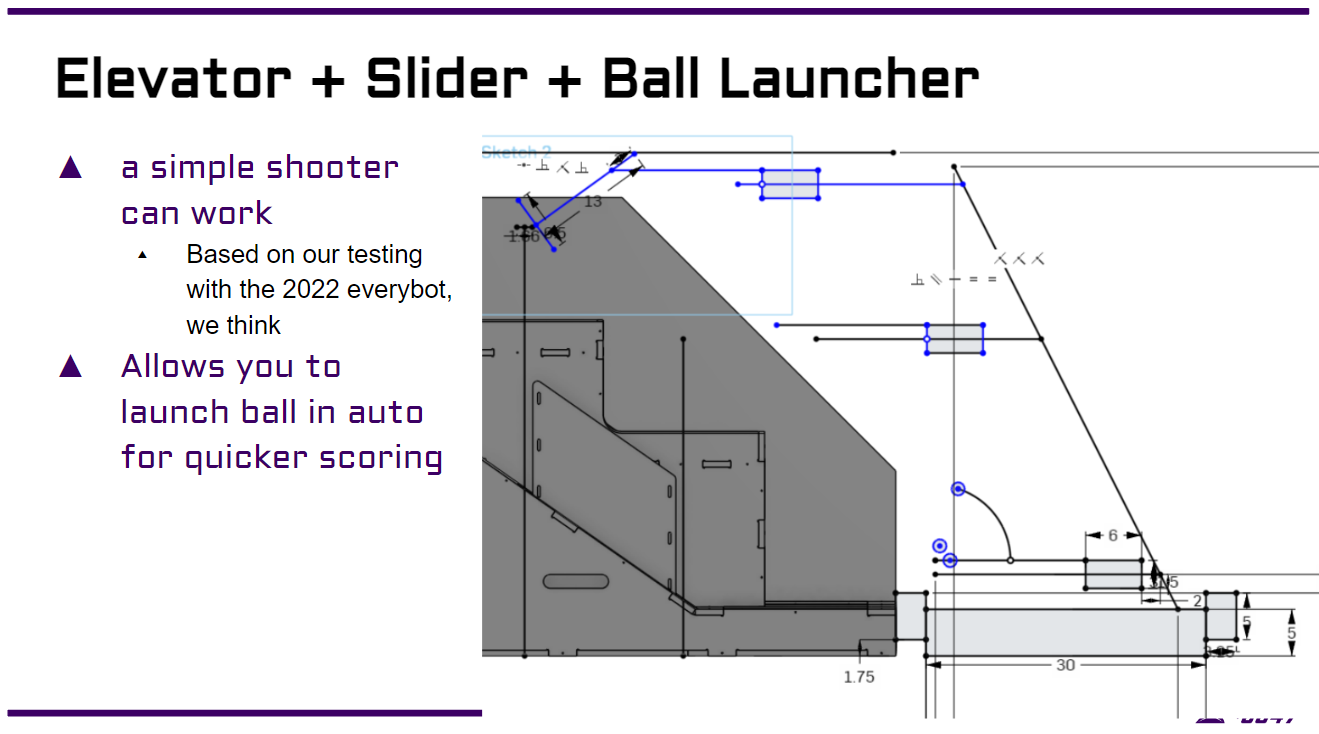 This is one of our favorite sketches of a robot that can reach the top cone-scoring location and do most of the top items on our priority list.

New things in the manual

I love the simplicity of the intake concept! Really reminds me of some of the 2019 intakes that had a hatch mech mounted right above the cargo mech.

I’m having a bit of a rough time wrapping my head around this one, so just to clarify: this rule is specific to tournaments, but not during regular build season? Or does this apply to build season/outside of tournament dates?