Recently I’ve come to realize that a lot of knowledge in FRC is “spoken wisdom” – passed down from person to person via conversation (or, at most, a lecture), usually within a team. I figure putting down this spoken wisdom in writing might help a lot of teams improve, and I suggest this thread as a place to collect it. So, what item of knowledge can you share? Looking for information in any field – mechanical, electrical, programming, control…

I’m splitting this to two threads, to make it easier for us to keep consistency in the level of knowledge we share. This thread is for “obscure” knowledge, i.e. information you don’t expect most teams have. This is information that might help mid/mid-high-level teams step up their game and be more competitive. For example, sysid can help characterize a system on your robot and allow you to create more precise control loops (I haven’t actually used this, I’m hoping someone will expand in a reply).

Please elaborate as much or as little as you can/want, from a full white paper to a single line, everything helps.

Looking forward to hearing your spoken wisdom! My contribution is in the first reply.

Rack-and-pinion-type mechanisms are characterized by the fact that there’s a linear relationship between angular and linear displacement, related by the pinion’s radius (same holds for velocity and acceleration):

We are usually interested in the behavior of the rack and not the pinion (what’s important is that the robot climbs up, a winch pulling on a rope is just a means to an end). Because of the rack-and-pinion relation, when the pinion is driven by a gearbox and a motor, something interesting happens. All important inputs and outputs (linear velocity, force capacity, motor current draw, motor rotational velocity) are only dependent on the ratio between the pinion radius and the gear ratio, instead of being dependent on each of them independently as we might expect in other mechanisms.

This happens because, if you develop the equations, you will only find that the pinion radius (R) and the gear ratio (mG) together, either as R/mG or as mG/R. I call this the Z-ratio, for no particular reason, i.e. Z = R/mG.

Simply put, if we double the pinion radius and double the gear ratio, we will see no difference in the behavior of our system! This means that once we choose a good Z-ratio (what ratio is “good” depends on the mechanism and on our needs), we can choose as large or as small a pinion radius as we want, and we’ll immediately find the right gear ratio, and of course the opposite is also true.

We discovered this this season when designing our climb, and the discovery allowed us to use a small winch and a 20:1 gear ratio instead of what we did in the past, which was using a large winch and a 50:1 gear ratio. Saved us a lot of space, weight and effort.

Note, according to the physics, the radius or the gear ratio don’t matter individually, but this is where theory meets reality and physics meets engineering. There are important issues to consider when choosing the pinion radius.

A small radius may be good because:

A large radius may be good because:

Sometimes, the alliance that scores the fewest points wins.

Robot designs that employ one clever mechanism to perform two game play functions often succeed. This happens when the two functions require similar (not necessarily equal) power and speed trajectories, and would otherwise have been addressed using two distinct mechanisms, thus adding weight, space claim conflicts, and complexity to the overall robot design. Identify the opportunity for such a dual-use mechanism early in your team’s design process.

Homework: find examples of this principle in prior-year FRC games. Hint: look for teams with multiple blue banners in that year.

The advanced controls section of the WPILib docs contains many old and arcane incantations that can, if invoked correctly, control the motion of a robot on the field to within a finger’s width!

*fatness of fingers may vary

The bumpers have a ± 1/2 in height tolerance. Use this to your advantage when possible.

I actually tried writing out a lot of this kind of advice into what I call the “Information Compilation” of our team. Some of the later sections still need re-written a bit so it’s very much a work in progress but it’s available on our team’s website. Team 4272 Information Compilation - Google Docs

On this, 1x6 lumber is nominally .75"x5.5". Making it a great size for bumper wood, if you’re ok with taller bumpers.

And they are not required to have planar top and bottom faces, nor level to the rest of the robot. A few of ours have a nice V notch to avoid high-centering on the bumper edge.

I think a better example of this from 2019 is actually the “default architecture” from that year though, the combo claw. 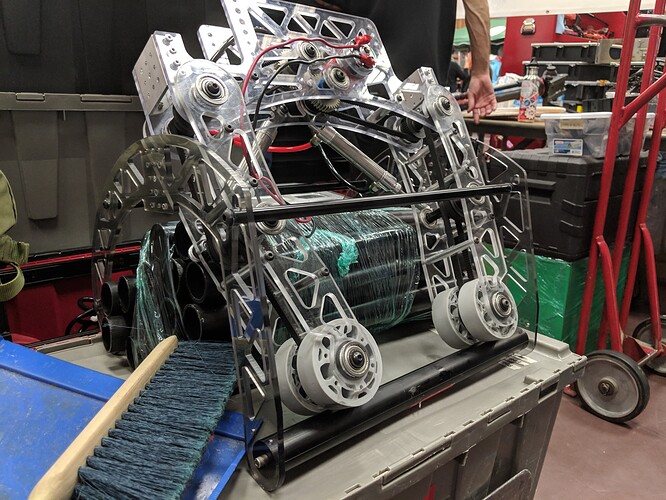 This is 5940’s from SFR that year. Teams that simplified their intake/manipulator to handle two very different game pieces had a much easier time than teams who tried to use two separate mechanisms (even they are attached to a Darth Maul pizza wheel).

Making a robot that could hit its mechanisms into one another during regular operation is usually a bad idea. A lesson I learned from our 2019 and 2018 robots(and in a lesser way our 2016 robot), having subsystems interact in a way that forces precise positioning/timing to not break itself usually slows operations, even with great controls(it also makes you extremely nervous about them colliding whenever the robot does anything, which isn’t very healthy)

The robot has to be “done” at least one week before your first competition.

The robot doesn’t have to solve every game challenge to be “done.”

An excellent driver can win with a simple robot.

A poor driver cannot win with the most outstanding robot.

Driver practice is the main difference between excellent and poor drivers.

Having a consistent autonomous routine is crucial to winning/doing well at an early district event.

It was super apparent that the teams that made it to semis and finals at our week two event all had consistent two ball autos if not more. Auto performance was often the deciding factor between which team won since that created a big deficit that was carried into teleop and was often insurmountable.

The ability to repair/replace a critical robot component in less than 30 min may be more important than designing and building it in 30 days.

A couple COTS things every team should know about:

Various traction / grip solutions - lots of guessing and checking every year, but be sure to know where to look for the following items: compliant wheels, 3-M non abrasive grip tape, fabric-backed polyurethane tread, various types of Velcro / Dual-Lock, various adhesives that do not leave a residue, etc. I’ll try and make a list of part numbers and edit this stuff in soon. The point being, collect the knowledge of random things you see teams use and try, and keep it in your back pocket for each year’s prototyping.