Hey, I’m Bruno from Team Brazil and we are currently planning the robot project on FIRST Global Challenge.

The game is similar to FRC 2017, where we have to get many smalls balls, storage it, and then shoot in target (similar to frc 2022 game)

We are struggling to get storage ideas, since we are planning to do a PID Flywheel, and the balls can not be in contact with it when the flywheel starts spinning

the main idea of the system is in the image 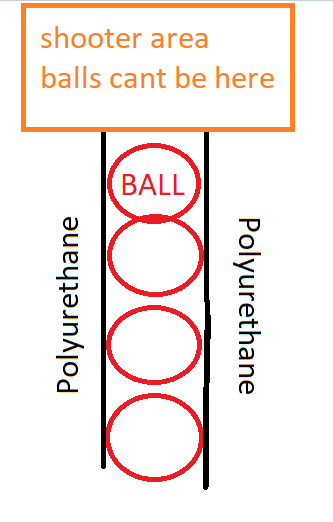 To prevent the storage to miss a ball in shooter area, the first idea is that we would like to create something like a “door”, blocking the storage output until it is full 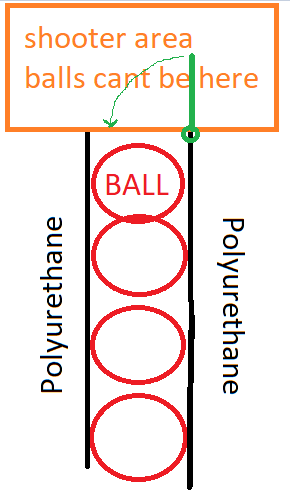 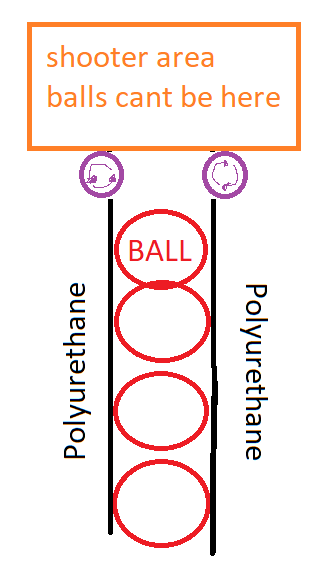 Do you have other ideas to make it done? What idea is better in your mind?

I like your second idea – but it all depends how well you carry it out. You can potentially feed the balls in one at a time, but in quick succession, once your shooter is at the desired speed for each shot.

Are the purple circles in the second idea a separate system from the polyurethane belts in black? If they are that’s a decent amount of motors/servos to allocate for the system.

I guess my opinion depends on how the game piece reacts to the polyurethane belts.

If the ball can slip on the belt when it reaches the door, I prefer the first idea as it allows you to continue to run the intake without having to worry about the first ball in the series getting pushed into the shooter.

FRC Team 842 had one of my favorite implementations for feeding a shooter in 2012. They had a belted conveyor on one side and the wall on the other side was on a hinge. When picking up a ball, there is enough compression at the bottom for a ball to go into the tower but not enough compression for it to go into the shooter. This allows the intake to continue running without accidentally shooting. Once ready, they closed the tower flap to give the tower compression and the balls fed into the shooter.

Both ideas are viable, it just depends, as Peyton said, on how many motors you’re willing to give up and how the balls interact with the belt material.

I have put together a reasource for teams to help them come up with their mechanisms for their designs (The Unofficial FRC Mechanism Encyclopedia – Project Bucephalus).

There is a full section on ball storage (indexers) and you might find an idea that works for you in there. There are many examples of both of your presented ideas in there too to take inspiration from.

goodluck with your FGC season, and if you need anything, the CD community is always ready to help!

What did you end up coming up with in terms of storage? Id have used a bin and incorporated that within the design here but Im curious on what you did. Please update!~