Strategy for squarely lining up on initiation line?

Anyone who wishes to create a repeatable autonomous routine that is capable of dependable high target shooting is probably gonna use a gyro and/or rely on odometry to perform their auton tasks. What tools, devices, strategies are you implementing to get your 0 degree line-up with known x, y?

The only two things that comes to my mind so far are lining up against the side walls or using SolvePNP, but they aren’t my favorite.

I think the outer goal is large enough that simple looking down vertically on your robot(s bumpers) and the taped line and using that to position your robot is sufficient to create a repeatable autonomous with no vision code.

In theory you can put two indicators (what popped into my head was tape) that you would place on your robot to be matched up with the line on the floor to get a consistent position relative to the drives station that you are facing and then as you said using the side wall would be the simplest solution to get a accurate location each match (in my mind).

Good teams will use some form a dead reckoning, better teams will use vision to align themselves, best teams will likely have turret shooters with vision and be able to shoot off axis once they get in the right neighbourhood.

Remember you have to be intersecting the INITIATION LINE, which is 7’ 6" away from the tip of the TARGET ZONE. Having said that, one ROBOT is going to be able to line up square to the PORT (which you should be able to eyeball). Picking locations for the other 2 spots may take some thinking and you are going to need a number of AUTO routines to cope with the different positions. Lining up square to an obvious feature has worked well for us in the past.

Just thought of this: 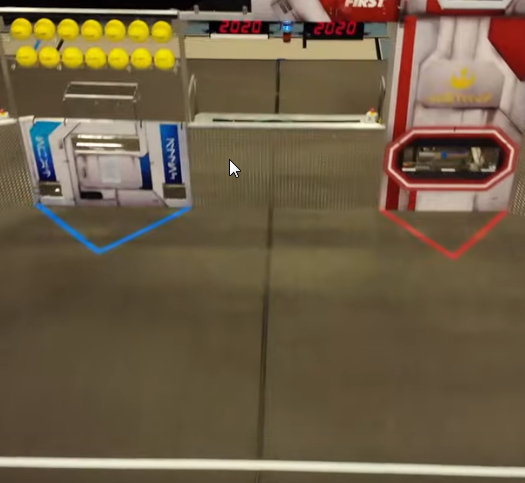 Depending on the definition of “intersect” (@merriamwebster/marshall), it’s possible for two robots to be inline with the goal.

I think most robots that attempt to do more than “drive foreward” will all want to be centered around the goal.

Also, as Matt_G brings up, it’s definitely possible for two robots to line up squarely in front of each other, the bumpers of each covering half the width of the (2" wide) initiation line.

Depending on the definition of “intersect” (@merriamwebster/marshall), it’s possible for two robots to be inline with the goal.

We’ve briefly tasked about a bow sight attached to the robot, I know we used a sight in 2012 to lineup fairly successfully, but I haven’t got that far yet.

Im gonna put a flashlight on my robot. If the flashlight is in the goal, the ball will go there too.

I disagree, the entire width of the tape is the INITIATION LINE.

973 didn’t use vision at all during Einstein 2017, and they won the championship that year (and had 6/7 really good autos on Einstein). I don’t know if vision is 100% necessary for success. It is very helpful though.

Depending on the game and your strategy you certainly can do very well without vision. However, given where the protected zones are and where you can “steal” CELLS from I expect shooting from the top of the TRENCH RUN and off axis only coming back far enough to get the angle. Vision will be a big aid with both of those. I also expect to see some turreted shooters with angle control that can shoot on the fly. Really need vision to pull that off.

We are doing a turret, so I imagine our strategy should be obvious for the shooting portion.

As for additional movement, I don’t think that we are far enough along to decide that. I’m feeling like, with a wide floor intake, we’ll have a lot of latitude.

Having said that, one ROBOT is going to be able to line up square to the PORT (which you should be able to eyeball).

Hopefully your best shooter will be able to line up from multiple places allowing less robustly programmed partners the opportunity to choose the spot that they can make their shots from.

I know we (1923) are planning on being able to shoot from various spots on the initiation line so as to allow our partners, who might need specific spots, to make their shots as well!

Your best shooter is likely a high goal INNER shooter, and as such likely can hit it from behind the line. I am predicting a bunch of alliances with two ROBOTS on the line, directly square to the goal. First one goes forward and shoots lower goal, second back up and goes high.