Hi everyone! After a busy weekend of FTC robotics, I’m interested in knowing what Chief Delphi thinks was the best defense played this weekend. It could be either a single instance or a team as a whole. Bonus points if you include a video!

https://youtu.be/99cMOU79ZVc all robots on the blue alliance weren’t able to go under the control panel, so team 4 just stayed in the rendezvous zone

3274 did a great job defending at Haymarket. They once got the whole alliance stuck in a corner!

2930 seemed to be doing a decent job against 2910 and 4911. They definitely slowed down two fastest scoring robots at Glacier Peak. I believe defense will be very effective when defending one robot, but defending multiple seems to be very hard for one team.

Being on an team that skews to offense, my opinion on good defense is, “Bring it on!” But, I believe good defense does not result in penalties, nor in damage to other bots. This was the damage to our bot that resulted in a yellow card for 3274. 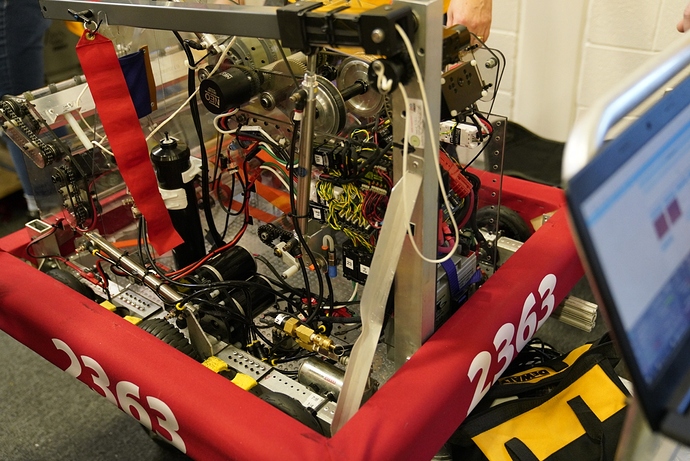 Will also add that 3274 was pretty chastened by that match and dialed back the aggression in QF1-3.

Our Haymarket alliance saw an excellent defensive performance out of 686. We faced strong sector line shooters in the semis and finals, leading our alliance to station 686 there. These sector line shooters could also shoot (less accurately) from the trench, so 686 exploited the fact that G11 doesn’t apply to the trench to keep them pushed as far back as possible. It wasn’t as aggressive or obvious as 3274, but we can check the teleop scores to see it’s effectiveness (as video hasn’t been posted yet):

114 at LA North appeared to just be slamming into everyone with a general disregard for their robot’s well being, but if you watched closely, they had amazing field awareness and were able to narrowly avoid slamming robots when in protected zones. They managed to take 973/1678 to a tie breaker in finals.

I’m sad that the rest of their alliance got wild carded into Champs, but they were not.

Being on an team that skews to offense, my opinion on good defense is, “Bring it on!” But, I believe good defense does not result in penalties, nor in damage to other bots. This was the damage to our bot that resulted in a yellow card for 3274.

That was a horribly unlucky time to bounce off the rendezvous 1x3, land on a ball, that catapulted them into your frame.

Defense in or around the rendezvous point can get tricky, to do it effectively, and penalty free.

From watching defense being played on 1678 and 973, we’ve found this to be the easiest best defense. There might be better out there, but it’s more difficult to pull off. 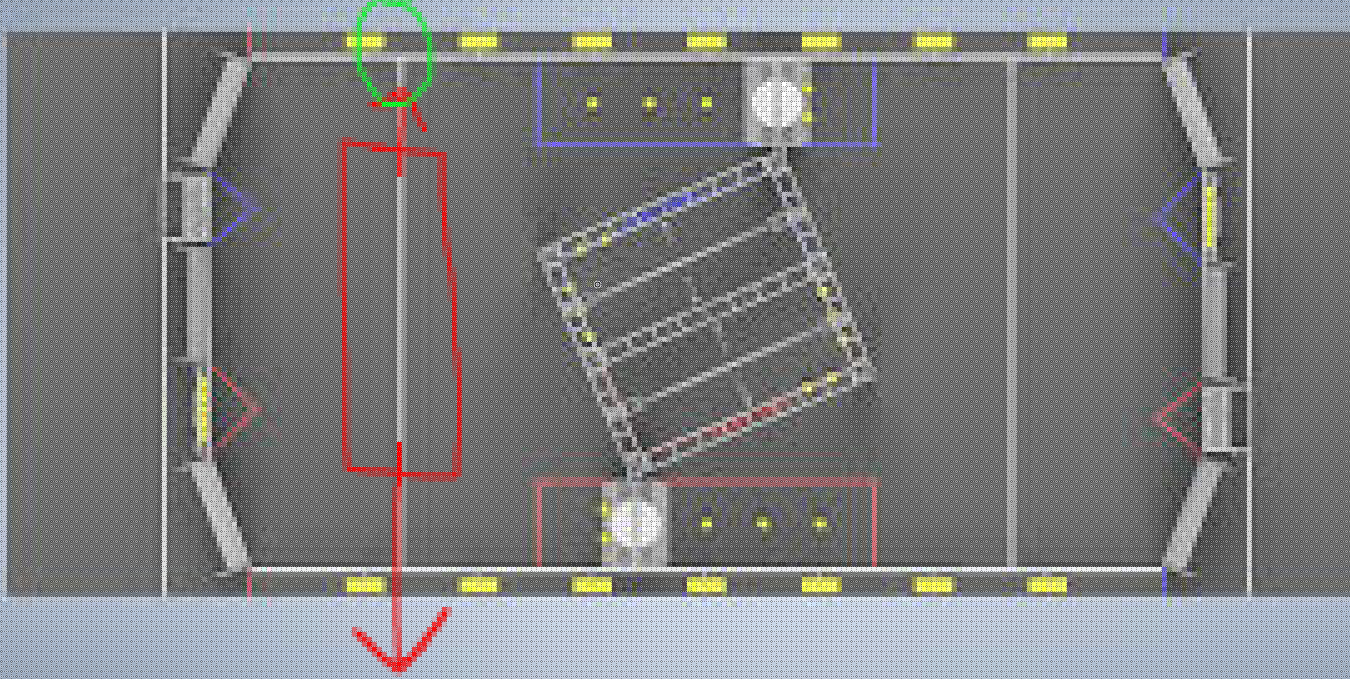 Put your wheels straddling the initiation line and push people along that line. Your goal is to either friction pin them near their trench (green circle) or push them toward your trench (big red arrow.) It’s more dangerous to push on the other axis because of zoning. Make sure you know the rules around the different protected zones inside and out! When they’re active, how much of your robot can be in them, etc.

Sometimes that defense looks like your robot is just sitting and not moving, but what it does is force other bots to shoot from further back. That gets more effective the longer the event goes on because ball quality falls off a cliff, so bots become less accurate.

The defense that 1553 played in this match was killer. https://youtu.be/dAo8-BbA47o?t=53
Going into the match, 4451 was one of the top power cell scorers at the event (if not the top), but they scored mostly from the initiation line, and were deadly from it. I spent most of the match coaching 1553 on how to play penalty free defense an aside from a pin call (which I think was incorrect) and a C8 call (which I also think was incorrect), they played flawless defense. I will be showing this clip to teams on our alliances that we are asking to play defense against teams that score from that line.

I am a bit biased, but our defense against 2607 was very effective this match and throughout the playoffs. While defending 2607, we kept them to only 1 ball and they scored only a few more once we left to score some balls before the end of the match.

6323 was doing a really solid job on 188 and 2200 before their main breaker popped. They did a good job getting into position and blocking the vision of two great smaller bots and hitting them while they were trying to shoot without getting penalties.

On another note, wow are 188 and 2200 both great robots. 188 has a chance to be the best robot in Ontario this year, and 2200 is not far behind. Strategizing to try and beat those two was a real challenge, getting a good robot like 6323 in the second round really helped close the gap.

If only our alliance could have pulled off the triple climb… this game really does come down to auto / climb roulette.

Sonic Squirrels definitely slowed them down, but I would also point out that the penalty points incurred in the process of playing defense were arguably the difference in the match.

This isn’t to shade their team or their defense - I thought that it was, for the most part, fairly effective. That being said, I’d take this example with a grain of salt.

Agreed - noticed the most effective defensive bots stuck to the initiation line. Stayed safe from penalties while still maximizing their disruption ability.

Defense is back because the game was ruined by bad game pieces.
It had the potential for 2013 type play with 3 zones of scoring. Not anymore.

That was great defense. Typically we don’t receive quality defense during qualifications. Great defense is about getting someone out of their comfort zone.

Also learned something about playing the game around a pile of balls. When you are trying to escape from a trap, those balls will jam into some bad spots. We got a ball stuck in the drive train chain during that exchange. A wall of balls is a 4th defender!

Oh yeah, we’ll look at that clip as a lesson learned…

467 was doing a fantastic job at defense until they got a red card.

I agree. A defensive bot must be careful.

In GNR QF 4, 8, and the Tiebreaker, 2450 played very good defense on us in the trench and made us pull back for our less tuned ling shots. Sitting where us trench runners tend to like to unload was a solid strat

I’m assuming the C8 was at ~1:44 in that video? That’s about the time blue pushed red ~1/2 of the field into the zone, pinned them against the wall, pulled back, and drove back into them? I could see an argument in either direction. Red started near the zone before pushing on the defense to get to the middle of the field. It’s hard to see that being a tech foul on them being pushed all the way back, though. It’s harder to see the second tap as well. It’s likely the second tap that turned it into a C8 call.

The pin started being called at 2:01. It was waved at 2:06. With 5 counts in between, they were a tad fast. Though, the pin count started after the actual pin started. Given the robot needs to get 6 feet away (from either the pinned robot or where the pin started) before the count stops, there’s nothing wrong with this foul.

I don’t want to detract too much from the thread. I’d be curious where your disagreement is if you’re interested in shooting me a message to explain.