Structural support of a 1/2 bolt through 1x1

I was wondering if anyone has had a good experience with using a 1/2 inch. bolt through a 1x1 piece like this in the photo. Our team’s goal is to try to replicate the climb joint in the video below. 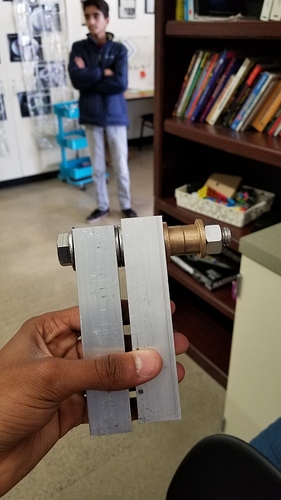 Using a .5" aluminum round shaft with bushings (the bronze things on the right side of your photo) with some sort of retention on both sides (snap ring, tapped ends) or even just a through bolt will be just as strong and lighter.

That should be fine. Also, the bushings are supposed to go on the inside, not the outside.

A 1/4 - 20 should be fine, but If possible try to step it up to a grade 8 bolt.
I would also suggest having as little lever arm as possible. the bolt in the video sticks out 1" further than it needs to be, if they had pulled from the inside of the climber frame instead of on the other side of the deployment arms it would be safer in general
Also keep an eye out for bending and wear after every match, sometimes things just suddenly fail after bending just a bit and catching it before that happens can be the difference in climb