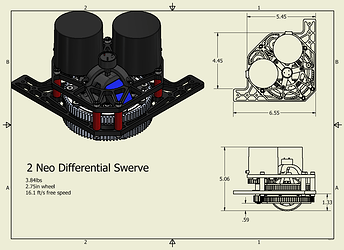 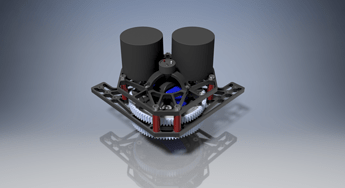 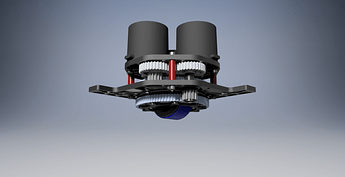 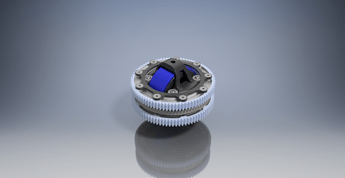 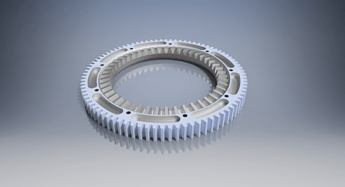 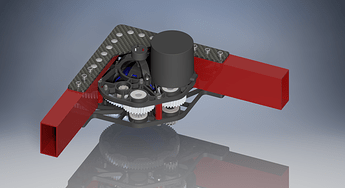 Designing swerves seems to be a trend as of late, so I figured I would take a stab at it too! Over the past few days, I created my take on a differential swerve. I took a great deal of inspiration from Aren Hill’s (971) swerve module here.

My goal was to make the differential swerve as small & light as possible while keeping it a reasonable speed and possible to make. Each swerve module is powered by two neos, geared for a hair above 16 ft/s free speed with a 2.75in 3D printed wheel with 1” Blue Nitrile Tread. It is geared a little fast, but with the two neos I believe it’s a good balance between top speed and acceleration.

The differential has two 84T VEXpro gears, each with a 46 Tooth bevel gear milled into them. The large 46 tooth bevel gear and the custom 10 tooth bevel gear is the part of the design that would be the most complicated to craft. Instead of machining the bevel into the 84 Tooth gear, you could bolt a bevel gear on with little modification to the design.

The module is designed to be nested into a one by two drive rail (as shown in the 6th picture).

Physical specifications for each module are:

Due to the module being nested inside the side rail, it only takes up 4.45 in each corner from the inside of the side rails (dimensions seen in first image).

All the aluminum and carbon parts could be machined on a three axis CNC mill or router, and all the 3D prints would use a MarkForged Mark Two 3D printer.

Critics and questions are, as always, more than welcome!

What I was thinking is you buy a Vex 84T gear so you have the outside profile, then you can machine the Bevel gear into it with a ball end mill and a 3D contour on a 3 axis mill

Really cool design, I wish I could design cad this well

Can you publish the cad?

I will eventually, however there is a couple of improvements I would like to make before I make my design public.

Thanks! I’m actually really happy with how it turned out.

Without being able to dig into the CAD, this seems like a great design, and is probably similar to what I would come up with if I tackled differential. I haven’t taken the leap as I have yet to see someone have a robust code solution and prove it out.

Couple improvement I would probably make on this design is finding a way to increase the ground clearance of the module, and enclose everything as much as possible. Great job!

Thanks!, and the cad will be out eventually, but there is a couple improvements I want to make first

Thanks, my team actually hasn’t used the built in encounters in the neos before, other teams have had some success with then so I’m hopefull that they will work well for us.

Dude that thing is sweet! Only thing I’m worried about is getting over things.

Thanks, I am a little worried about that as well, but depending on the game it wouldn’t matter that much, there is also ways to modify the module to increase ground clearance

This is a beautiful design and I can’t wait to take a closer look at the cad when it’s released.

This is some crazy cool stuff - great job. The design looks very well thought out and is crazy cool how it’s implemented it with the 2x1. Some questions I have are:

The 2x1 looks like it’s 1/16" wall. What led you to using 1/16" instead of something like 1/8"? Were there design challenges that prevented the use of 1/8"? Do you think that 1/16" wall will hold up and work fine for this design?
Also, I would just like to confirm that there are 6 bolting locations for the module it looks like?
Thanks!

yes in the design show there is only 6 mounting holes, however i have sense added one more in the corner where there was the large 45 deg cut in the plate (see the image below) 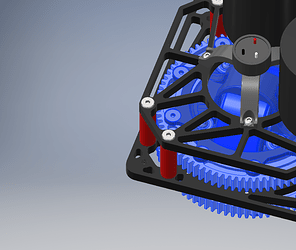 Love it. Looking forward to the released CAD. I had heard of differential swerve, but hadn’t taken the time to understand it. Any plans to physically build and test anytime soon?