My team is looking to use this extended offseason time to build a custom swerve drive. One of the questions that’s been raised during this process is whether the main bearing needs to be X-contact or if radial contact is good enough. I know the conventional wisdom is that you should use X-contact bearings because the robot weight produces a significant thrust load on the bearing. My students say that they talked to people from WCP, who say that their swerve uses a radial contact bearing with no other support to take up the thrust loads. Radial contact bearings are significantly cheaper and available locally here, so it would definitely be good if we can use them. But before we settle on that I want to make sure that our drivetrain won’t break mid-match if we go that route. It would be great to hear some opinions on the matter from people with swerve experience. Thanks

Don’t have any swerve experience (yet), but the AndyMark swerve module also uses a radial contact bearing.

Deep Groove radial bearings can take up to 50% of the radial load rating in the axial direction:
https://www.skf.com/group/products/rolling-bearings/engineered-products/insocoat-bearings/load

This isn’t the full picture. A swerve drive doesn’t just see vertical loads, it also propels the robot, so the bearing has a torque on it. DGBBs aren’t designed to take such loads so they aren’t rated for them. Maybe they could be derated for this as well?

I’ve used some very small DGBBs in racecar uprights (6810s) albeit in pairs. The majority of the load is twisting (about all axes!). You’d be suprised how strong small bearings can be.

This is true of many deep groove types, such as those commonly found in electric motors (62xx and 63xx series). However, thin section ball bearing assemblies like (6816) have shallow raceways and can take less axial load; typical factors are between 10% and 30% of radial load rating. (source)

These bearings are going to have a hard life. I would go with the x bearing. China has made them affordable.

Also consider shock load, plus this bearing will see a lot of load when it is static (not spinning). Much will depend on the specifics, including that one hit you take in a match or that time someone drops a corner of the robot…

We make our own bearings by cutting groves into aluminum plates and buying our own 1/4" Delrin bearing balls. We do not do any post treatment of the aluminum such as case hardening. The groove itself is not specially designed in terms of where in the grooves the balls are going to make contact. We lathe the grove into the plate using a 0.25" diameter half round cutter (same diameter as the delrin balls) and cut the same diameter groove in the two mating plates.

We have been using this in our custom modules since 2017. We have never had an issue with these bearings. The balls start off white but turn a medium grey by the end of the season as they pick up the aluminum oxide from the contact with the aluminum groove.

Given that our custom bearing is clearly not designed to carry anywhere close to the load that these Steel X-contact or even the radial contact bearings are designed for and yet are able to operate without any issues, I would say that either bearing type is probably massively over-designed for FRC swerve drive cases and you are not going to have any issues with either of these bearing types. Granted, we don’t use our modules more than one season (we can’t per FIRST rules) so we don’t really have a lot of data beyond 100 or so matches. But we did launch off HAB2 in 2019 regularly and we have driven over the 2020 rendezvous boundary without issues, so there have been some pretty decent abuse cases in our experience.

This reminds me of the mythical story of NASA trying to design a ball point pen that works in 0 gravity. After a lot of time and money, they asked the Russians how they deal with record keeping in space.

They replied “We use a pencil”.

For sure a plastic bushing / washer would work for a Swerve azimuth. The question is whether a design that uses one can be made as cheaply. Do you have a good design example?

X-contact bearings from China are pretty cheap now, and really easy to integrate into a routered-plate construction.

I agree that with the availability of cheap bearings and the topology of most modern swerve designs the bearing makes more sense. A bushing works really well for us because of the height of our module.

A swerve drive doesn’t just see vertical loads, it also propels the robot, so the bearing has a torque on it. DGBBs aren’t designed to take such loads so they aren’t rated for them.

This is one of the main things that scares me about using radial contact bearings. I’ve seen (and learned in my mechanical design courses) how to calculate bearing loading and life for radial and axial loads. But the only mentions of moment load (non-axial torque on the bearing) I see are for x-contact bearings.

However, thin section ball bearing assemblies like (6816) have shallow raceways and can take less axial load; typical factors are between 10% and 30% of radial load rating.

It just so happens we were looking at using 6816 bearings. They’re rated for ~13000 N of radial load. If we split the difference and say they can handle an axial load equal to 20% of their radial load, that puts each one at 2600 N, or 584 lbf for those less metric-inclined. At first that seems like enough especially when you consider there are four to support the robot weight. Except that doesn’t include dynamic loads, torque loads, or shock loads, the robot could easily rest on two modules if not one, and that 20% could be as low as 10%. Those factors lower your FoS significantly. Then again, the WCP and AM swerves both use radial contact bearings and I haven’t heard any problems with them, so it must still have a reasonable FoS.

We make our own bearings by cutting groves into aluminum plates and buying our own 1/4" Delrin bearing balls.

Could we use a bushing? Sure. Is it easier to source/manufacture a bushing with the right dimensions and properties than sourcing the proper bearing? Probably not. We know we can get the right size radial contact bearings locally for cheap, and if we need to we can get the right x-contact bearings from China. I wouldn’t even know where to start looking for bushings in this size locally, and I’m more skeptical of the Chinese ones being decent quality.

This reminds me of the mythical story of NASA trying to design a ball point pen that works in 0 gravity. After a lot of time and money, they asked the Russians how they deal with record keeping in space.

They replied “We use a pencil”.

It’s a nice apocryphal tale, but it’s not really true. NASA also used pencils at first, and pretty much all space agencies have since switched to space pens (which were independently developed by a third-party at no cost to NASA) to avoid conductive graphite flakes messing with sensitive electronics.

Yeah that is one thing to consider for sure. The 2767 modules do have a different layout than most of the “Hill” design philosophy that has worked its way in over the last few years. this is especially prevalent in commercial modules on which a LOT of custom swerve implementations from teams are based.

If you go back towards the “revolution swerve” style modules the Stryke Force design philosophy with the bushings for the azimuths works well. (Not particularly surprising given the legacy of the 2767 modules.)

. I wouldn’t even know where to start looking for bushings in this size locally, and I’m more skeptical of the Chinese ones being decent quality.

Based on what you have laid out for your bearing requirements I tend to agree with you that a bushing may not be the easiest thing here. This would definitely be a manufacture yourself thing.
Aluminum and nylon do play rather nice together fir bushings in FRC. I’m not sure what the diameter of the contact surface would be for a bushing implementation for your module though. Heat on the azimuth could become a concern at higher RPMs with a large (>2" **) bushing under some heavy driving conditions ( ** gut feel, no math)

It’s a nice apocryphal tale, but it’s not really true

We make our own bearings by cutting groves into aluminum plates and buying our own 1/4" Delrin bearing balls.

We did something similar in 2015 with 3/16 balls, but we used alternating steel and delrin balls. It worked well, but in our design we needed additional radial bearings on the other side to keep the whole thing constrained together so the balls wouldn’t fall out. 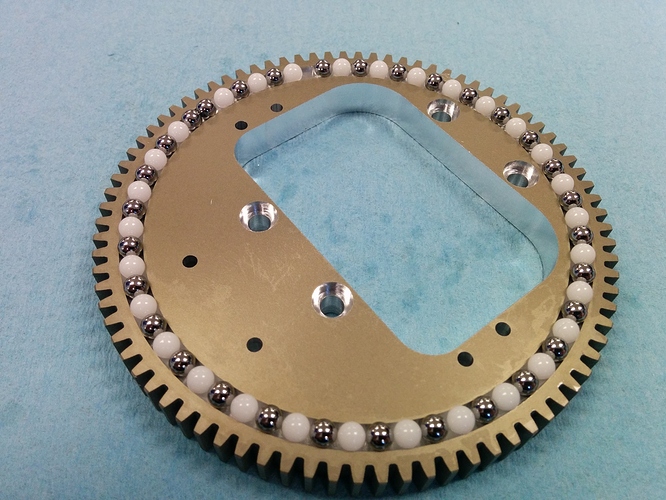 Could we use a bushing? Sure. Is it easier to source/manufacture a bushing with the right dimensions and properties than sourcing the proper bearing? Probably not.

Here’s the 114 swerve that used a total overkill bushing setup. I think the exact part we used was McMaster 6338K598, an oil-embedded flange bushing. We machined some delrin blocks using offcuts from a sponsor, and sandwiched that block between two 1/4" plates. Knowing how little load the azimuth bushing saw, we could have just used the delrin bored to a slip fit on the azimuth shaft, and it would have been fine. 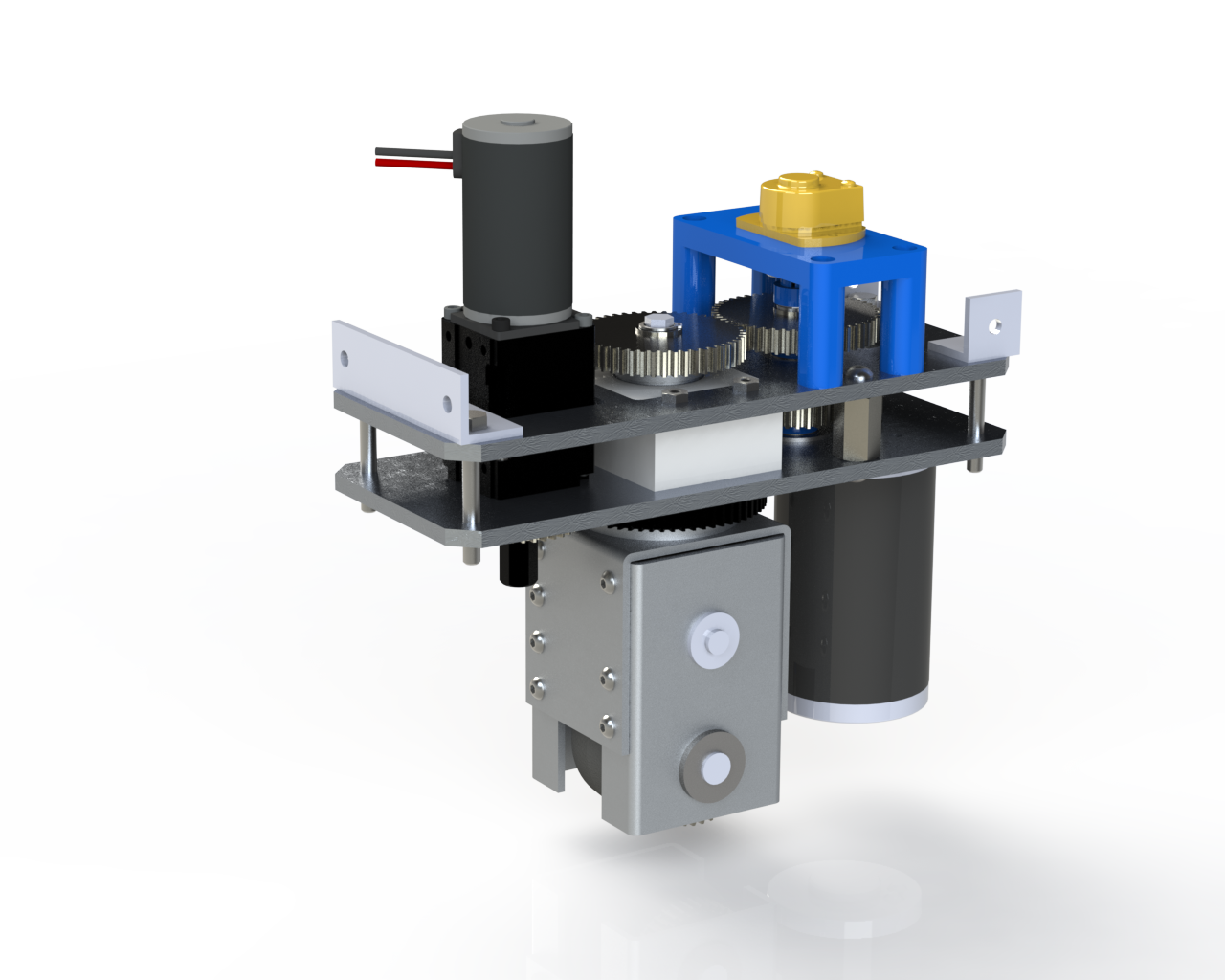 For larger diameter modules (like these newfangled bevel gear on the wheel ones), something like McMaster 5906K528 might work out ok. Controlling tolerances around that bushing might take a little napkin math, but it should be fine. Tons of load capability, and the benefits of oil embedded bushings mean it’ll wear nicely.

That’s nice, but McMaster doesn’t ship to Israel. We know where to get bearings from. Bushings not so much…

However, their continued improvements to vacuum-tube technology long after the US had shifted our emphasis to solid-state electronics is well documented. It saved them a lot of research investment, which in turn kept them in the space race much longer.

My mistake, I missed the geo requirement and pulled a typical American-centric view.

It looks like Igus has an Israel branch. I know their HQ has been involved with FRC as a sponsor for a while. Maybe they can help out? They make some pretty epic plastic bushings.