Hi Everyone,
We are attempting to program swerve but it is currently not working. I don’t even know where to start. We are using Neos with SDS MK3 and CTRE CanCoder sensors.

If all you can do is point me to working code of this setup, I’ll take it!

I don’t see anything that is too clearly wrong. What exactly isn’t working? If you just want some code to reference you can look at this code from 364.

This is all while testings in a static position. I can’t put it on the ground until the wheels align properly. I have set the offsets by manually aligning the wheels and recording their offsets.

A very general suggestion: The angle measurements seem like very tortured calculations and are too hard for me to follow. Make sure they are doing what you intended with print statements.

And don’t forget that the gyro doesn’t move with the robot on blocks, if that matters to your angle calculations (probably shouldn’t since that is normally used just to flip to field orientation).

I don’t even know where to start.

So a quick look at your codebase doesn’t reveal an obvious issue. This isn’t to say there isn’t one or more, but it just means I don’t have a “silver bullet” answer for you.

General advice for how to start to break down the problem of “sweve doesn’t work”:

Finally, the one universal piece of advice I always ask everyone doing SDS modules to check before they get too deep into software: 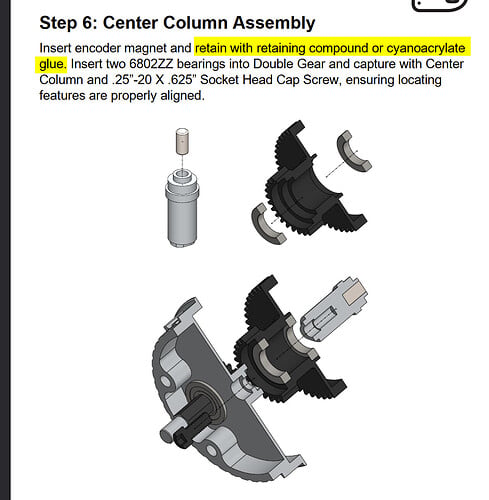 OK, lets start with clarifying questions. Does Swerve Constructor need 0-360 or -180 to 180? What methods require that?

Is the offset value the actual reading when the wheels are aligned correctly?

I’m not sure I have found your problem, but a few observations.

In SwerveSubsystem, when you call com.kauailabs.navx.frc.AHRS.getAngle(), I believe you need to negate the angle because this API returns clockwise yaw, and FRC/WPILIB generally uses a counterclockwise convention.

I fixed those items and I’m trying these tomorrow. THANK YOU!!!

How did that work out for you?

I just wanted to add that, for deadband, you could consider using MathUtil.applyDeadband.

Status Update. Swerve is working and it required basically re-writing everything and some code ducktape. Feel free to use if you want it. On a side note, I think I understand it now.

I’m glad you made a successful swerve drive. I’m surprised it drives better with your change from brake to coast motor.

I changed it back to kBrake. I may have not pushed that back up. I put it in coast temporarily so I can manual turn the wheels to get encoder values.

Consider keeping your drive train in brake mode while enabled and switching to coast mode a few seconds after it is disabled. I wrote up some notes on how to do this.

Nice! Thank you for sharing!