Our team decided to make a swerve drive this summer and I am designing it. I think belt is better for rotation so I want to make it belt but I have one question. If any defense robot hit us can belt hold the rotation or it just goes like mechanum against defense robots

I’m only like 75% sure I properly understand what you’re asking here, so feel free to let me know if I’m completely off topic.

If you’re asking if it’s fine to drive the rotation of your module using a belt, it is (the most prominent example of this right now is the SDS MK3 module - highly recommend looking at their CAD). The reason mecanum robots are so easy to push around is because every point of contact they have with the floor is a roller - swerve doesn’t have that issue.

I wanna ask you another quesiton. How can I make the best tension for belt do you have any sugestions or maybe photos of belt tension

If your design is a special case where the wheel patch is not on the axis of rotation, then this is something you will have to run the math on and see what the torque is for a given force at the wheel contact patch.

If your design is a fairly standard swerve design with the wheel patch on the axis of rotation, then a belt should be just fine.

99% of the time, just designing in the proper center-center distance for your belt and pulleys is enough to keep good tension (again, check out the SDS MK3 module).

If you want finer control of belt tension, you can either design in an idler pulley on a slot to control belt tension, or mount your drive motors on slots (I believe 2767 used this method in the past, unsure if they still do).

To add to this, your worst case scenario is if there is some kind of bump on the field like what the 2020 field had, and the side of your wheel is up against the side of the bump. Then any module rotation will have the wheel attempting to rotate while it is stalled up against the bump, and your belt could see slip, etc.

That said this is an edge case that is likely to never be an issue for you unless you get pushed into this position or something.

TLDR: Belts are fine as long as you tension and size pulleys properly.

Here’s a few things you should consider when determining if a belt will work for a given application:

What pulley diameters can you use? Large diameter pulleys mean less tension on the belt and more contact which reduces tension required to prevent slipping.

How much wrap can you get? Large pulleys can get away with less wrap and not slip. There’s probably calculators for this, but they’re pretty conservative. I usually aim for at least 35% wrap on the small pulley and if I can’t get that I add a tensioner to get more. If you’re doing a 3 pulley run this gets more complicated. WCP has a great video series that covers this.

What are the loads on the belt in the application? How much torque are you trying to transmit? What fails in the system if you drive it into an end stop? I like motors stalling to be the failure point instead of belts grinding away teeth or elevators driving through end stops and falling off the robot. In the context of a swerve module loads can be hard to visualize if you haven’t drawn a free body diagram. As wgorgen said as long as your doing a traditional swerve where you don’t have caster angle, pushing sideways on a swerve doesn’t cause the wheels to steer so the belt has very little load. Field obstacles can prevent wheels from turning if you’re pinned against them, but rarely seem to cause issues major issues with teams that use belts to steer.

How are you setting your belt spacing / tension? Are you going to CNC a plate that holds all the center distances? Are you building an adjustable tensioner? Are you going to wrap electrical tape around a pulley until tension seems right? Ideally you have as little preload tension as possible that still allows you not slip when applying dynamic loads to your system. A swerve generally has such a large pulley for steering that this is not a large concern for the module, but not having enough tension may cause you to slip at the motor if you don’t tension this properly. Depending on the application you can run really loose belts to reduce friction (254s hot dog rollers in '17 come to mind). Looser belts do add a bit more position compliance you probably don’t want in a swerve.

How are you assembling the belt? Belts require you to be able to access the end of the shaft they wrap around, they also can be a pain to assemble under tension since they don’t stretch. This can sometimes make maintenance a nightmare if you’ve buried the belt in the middle of a mechanism. In general I don’t like belts for steering swerve because it makes swapping a module harder than aligning gear teeth as you slide a module in arguably my dislike for this is silly because you don’t really need to swap modules that often.

I was thinking that belt is smoother than gear but after seeing 1323 swerve in 2019 I started to consider making it with gear.Does belt rotation makes it better or is it the same thing

I believe 2767 used this method in the past, unsure if they still do

Yes and Yes. Slots are King with our setup.

We use HTD belts for this task, with quite a bit of tension, driven 1:1. Make sure the system isn’t overly cantilevered & is quite rigid, then you should be fine. We also went from reading the azimuth angle from the motor side to reading it from the swerve side, so a belt skip isn’t the end of the world.

Unless you are getting pushed into an obstacle, or have wheel caster, the loads may not be as high as you may think, not small, but not necessarily huge either.

Belts are going to have a significantly larger area of engagment. If the azimuth rotation mechanism is driven by a 3dprinted gear you may have some nasty surprises, better to spread the load with a belt. AL or steel gears would not have this issue, but are heavier (albeit low on the bot). There’s merit to both approaches.

In the context of a swerve module loads can be hard to visualize if you haven’t drawn a free body diagram.

Belts are going to have a significantly larger area of contact. If the azimuth rotation mechanism is driven by a 3dprinted gear you may have some nasty surprises, better to spread the load with a belt. AL or steel gears would not have this issue, but are heavier (albeit low on the bot).

I would agree with the 3D Printed gear assessment.

We use Aluminum gears for our swerve module. We laser cut the large module gear (which is integrated into the rotating structure of the module) and use a COTS 20DP gear for the smaller gear. When you compare a gear with a pulley of the same diameter the gear is much thinner than a belt pulley would be. If both are aluminum, the pulley would be heavier. A plastic pulley will be lighter than an aluminum pulley. So I suspect that the weight tradeoff is pretty negligible between gear and belt.

In my mind, the reason to chose one over the other would be manufacturing capabilities. Since we have a sponsor that will do waterjet or laser cutting for us, it makes sense to do that and have an overall more compact module. But for a team that has a 3D printer, it might make sense to go with belts and printed pulleys instead.

Also Isn’t belt gonna get loose over time ? Will this be a problem in the future since we will need to tension it more over time which might cause a need for replacement?

Wow. That’s, umm, daring? I’ve always heard that 60% is the minimum and we go for a lot more whenever we are using belts or chains. I mean we love wrap: 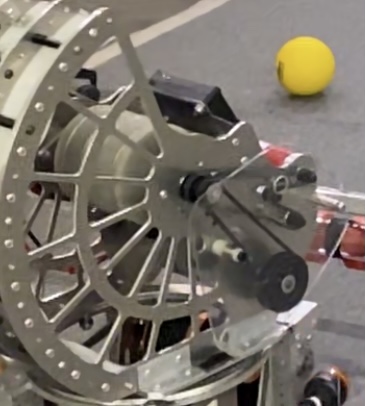 Belts don’t stretch over time because there is continuous strands of fiber/kevlar/etc inside the belt. This is there for precisely this reason and to help increase the tensile strength of the belt.

Maybe 60% on the larger. 60% on smaller doesn’t make mathematical sense.

Silly me, confusing % with degrees!

60 degrees is the usual minimum (afaik).

[edit]
as penance here’s an early Ford flathead V8 with (to my eyes) crazy small wrap: 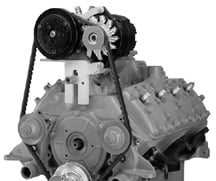