For teams that use swerve drive, how do you guys mount your bumpers?

Not on 2767 but I’ve seen their robot many times though out the years and this last year (2020) they had little pins welded to the fram and they just stuck a little Bobby pin through it. Similar to what you’d see on a trailer hitch. It seems really compact and simple.

This post shows how we have mounted our bumpers on our swerve robots for the past 3 years.

[image.png] Our bumpers have a 1 X 1 versa chassis frame bolted to the wood near the top. We mount the bumpers to the robot chassis with 1/4-20 screws. The screws are partially threaded. Inside of the 1 X 1 bumper frame a lock nut is threaded all the way up to the unthreaded portion of the bolt. A spacer is below the lock nut. When the bolt is tightened from the top, the nut clamps the spacer and lower wall of the 1 X 1 to the threaded standoff that is mounted on the robot chassis. The nut can…

We had tabs with holes on our bumpers and bolts sticking out of the frame. We would fit the tabs over the bolts and then screw down these custom nuts that had a metal ring on it so we could attach handles to carry the robot. It worked well, and was easy to carry with both the bumpers on and off.

I’m not sure swerve making mounting bumpers much different. If anything, it’s easier then mounting bumpers to a WCD as swerve generally has box tubing around the entire frame perimeter for the frame which is very easy to mount the bumper to in countless ways.

This year, our team had 1x1 alum extrusion rails mounted to the back of the bumpers with wood screws, which we bolted through and into large standoffs on the outside frame rails of our drive train using 10-32 bolts. These standoffs also acted as half of the total mounting nuts for our swerve modules. This was our first year doing swerve (and a custom drive train in general) so I am not sure if this is the best method overall, but it was ridig and not going anywhere once mounted! 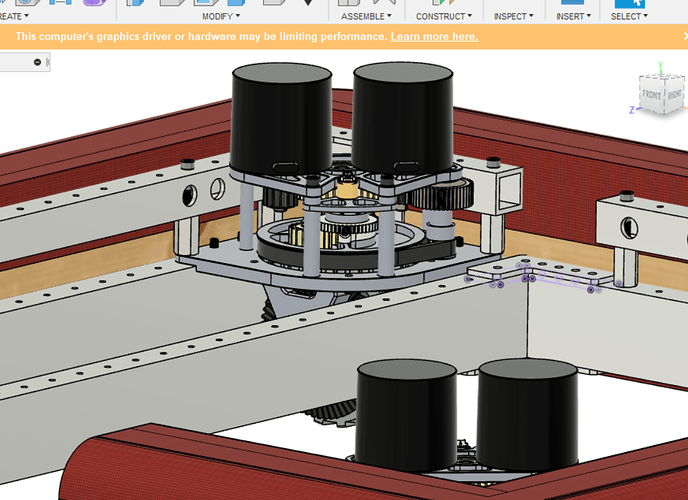 I was just wondering, since a lot of teams (like mine) mount their bumpers at the corners of the robot, but the swerve modules can interfere with that

Interesting! Thanks for the insight!

Just because we were brought up, here is this year’s bumper mounts, they interface with little pieces of angle screwed to the plywood of the bumper: 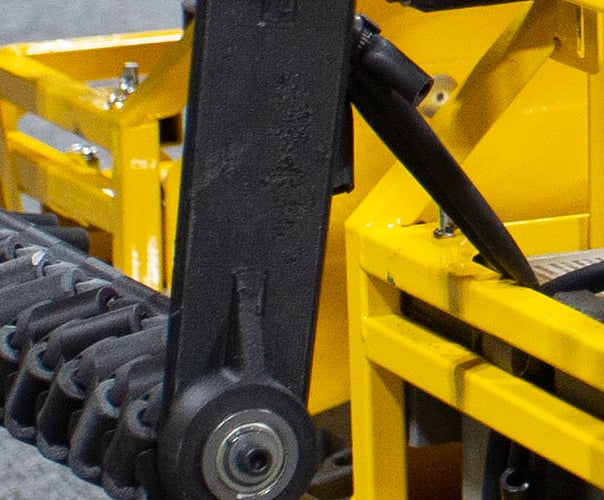 It’s just a clevis pin stud that a clip goes through. nothing special. We had to go this route as we cant drill holes for drop-pins through the 4130 frame without structurally compromising it.

Sorry to derail this thread but is your intake 3D printed?

Here’s another pic of what Skye showed.

I think the title should be bumper mounting techniques as it’s not so much about swerve as it is about different frames. We’ve used this technique for a while and frankly it’s a nose wrinklier. I’d like to see others. Think it’s time to review the link that Patrick posted. 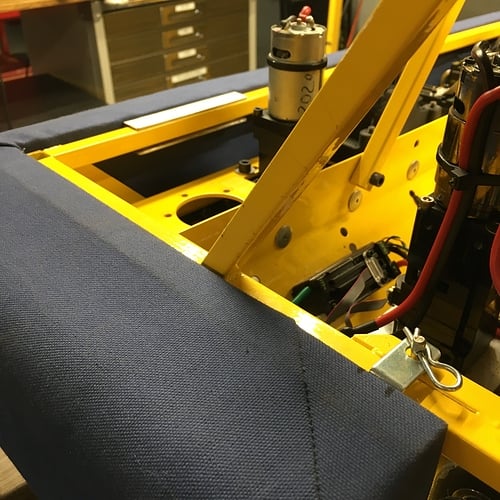 This swerve has been removed so you can see the aluminum U channel which started life as a a 3/4 thin wall tube. One side was removed with a band saw.
The pin is a generic, multi holed clevis from the hardware/farm store.
The bracket is a steel bracket from Menards.

Here’s a closeup of how the clevis pin is held. 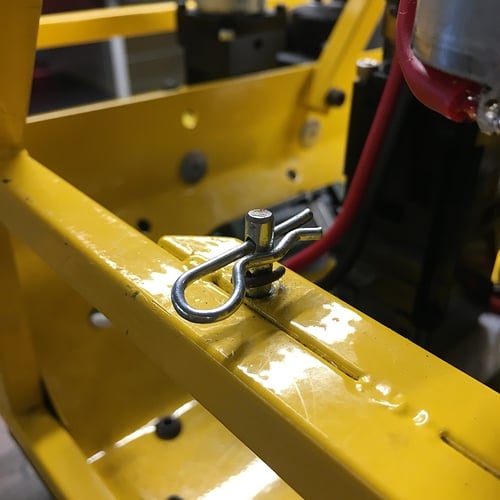 Everything in the picture that is black (except the silicone tubing) is printed on a MarkForged. The forearm has layers of Kevlar and they flex when hit. They are considered semi sacrificial however the ONE competition we attended they held up fine. Other teams (including us) have used polycarb in the same manner.

Our attachment is similar to what others have posted. I’ve attached a picture below that shows it pretty well. We have a full perimeter 1x1 frame. We have studs (3" long 10-32 bolts) protruding up out of the frame at various locations and then we have a thin wall 1x1 attached to the inner face of the bumper with holes in the same locations as the studs such that they slide over the stud until the bumper 1x1 is resting on the frame 1x1. There are some nuts on the bolts that hold the swerve module to the frame that create the gap between the bumper 1x1 and the frame. The bumper 1x1 is attached to the bumper plywood using T-nuts in the plywood and a 1/4"-20 bolt (the bolt heads are visible on the inside face of the bumper 1x1 in the picture). Since the module fits inside the frame rails, it also fits inside the bumper as can be seen in the picture. 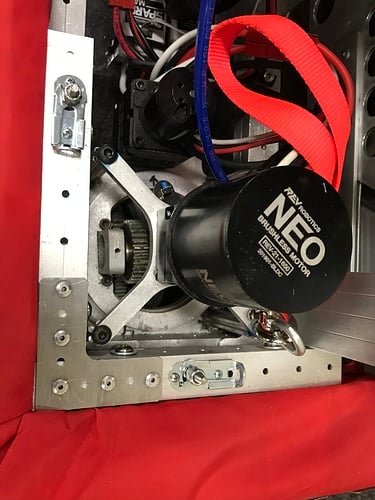 We used Dzus sliding latches this year for the first time. The bushing was threaded onto the stud. We were not as happy with this approach as we were hoping for as the latches seemed a little tight. We think with a little adjustment we might be able to make it easier to work with.

and then we have a thin wall 1x1 attached to the inner face of the bumper with holes in the same locations as the studs such that they slide over the stud until the bumper 1x1 is resting on the frame 1x1.

When I read this, I thought it might be against R24 (BUMPER construction); I have only used angle, sheet metal brackets, or pass-throughs like tee nuts for bumper mounting. R24 e and f only allow angle or sheet metal (or staples/screws) to clamp fabric and attach segments to each other; tube is not mentioned. However, I don’t see anything in R24g which would rule out tube to attach the bumper to the ROBOT. (But you may want to double check you aren’t violating 24e or 24f incidentally.)

We have used this technique of attaching our bumpers going back to at least 2016. It has never been questioned by any inspector (18 total competitions including 4 CMP inspections).

Having said that, I looked at the rules and noted the following:

We are not using the 1x1 to attach the segments to each other. The use of such brackets is also listed as optional and there are no size limits on such brackets (although figure 9-5 seems to imply that the brackets would be small in size, there are no specific dimensional limits given).

I think the 1x1 system that we are using certainly qualifies as a rigid fastening system / attachment system. This rule has no real restrictions on how this system can be designed.

The 1" limit for hard parts shown in Figure 9-6 seems to be referring back to the R24E requirement that the metal angles not extend more than 1" beyond the frame perimeter, but the figure is very unclear on this point. The two dashed lines of that 1" limit are not aligned with anything on the structure of the bumper except maybe the inner edge of the angle and the T-nut, but that does not seem to make any sense. Although the plywood board falls between those 2 lines, the two lines are not aligned with either surface of the plywood, so it is not clear how the 1" limit relates to the plywood, if at all. The frame perimeter is not shown in that figure, so it is impossible to tell if the inner dashed line is the frame perimeter (which is what R24E puts a limit on). All in all, this figure is very confusing with respect to how the bumper is attached to the robot and does not seem to restrict the use of the 1x1 to attach the bumper to the frame as we are doing.

So, I can’t find anything in the rules that would prohibit an attachment system like what we are using. But, as always, I am open to hearing alternate interpretations…

We used Dzus sliding latches this year for the first time. The bushing was threaded onto the stud. We were not as happy with this approach as we were hoping for as the latches seemed a little tight. We think with a little adjustment we might be able to make it easier to work with.

+1 from previous experience with these

You do however need to be careful when positioning these and plan for how the bumpers are slid onto the robot. Proper planning and careful installation and these are GREAT.

Everything in the picture that is black (except the silicone tubing) is printed on a MarkForged.

I didn’t know we printed the zip ties and the fastener on the end of the shaft on the MarkForged. Neat!