Oh, it’s actually completely broken for all non week 1 events. I think I know the issue so I’ll clear that up tonight or tomorrow at the latest.

Alright, added v0.6. I’ll have another update with better seed values on Thursday.

Are these only the teams that have been in an event so far? Where would the complete week 1 Elo list be?

You can find it in the “seed values” sheet of my scouting database.

Was going to also copy them here, but that’s too many characters for a post, so here’s a google sheet with them as well.

Just added a week 1 update, I’ll be trying to get future updates out by Wednesdays, but early weeks are always rough as I work through fun new issues.

Changes since v0.6:
Removed the useless metric in placeholder1
updated seed values
Adjusted match predictions to use an average of Elo and Predicted Contribution predictions
Now calculates own side bias in calculated contributions

Thanks so much again, Caleb, for providing your super awesome simulation spreadsheet again! I know it’s a ton of work for you each year. I do appreciate it, as do many others I’m sure.

Is that also why the only option for Settings, “Simulations to Run” is 0 (metrics only, no simulations)?

Alright, I did some work yesterday to get predicted rankings up and running. Those are now available in v 1.1.

I’m always terrified of releasing the first round of ranking projections because I’m afraid of bugs, but I have to make the leap sometime so here I go. If you want to help me out and look for bugs, there are a couple of good tools you can use:
First, you can check the “rankings” sheet to verify all the data lines up with official results. The data in my rankings sheet is not directly pulled from TBA, but rather constructed based on match data, so any error there is likely to carry into the rankings projections.
Second, I have given you the option to simulate the event from any point in time by adjusting a cell in “data import”. One simple way to use this is to simulate consecutive matches and see if the ranking projections update in a way you expect for teams that competed in that match.
Lastly, building up on #2, I have a sheet called “continuous ranking projections” which can make cool graphs telling the story of a team’s ranking throughout the event. Everything on those graphs should make intuitive sense if you think about it. For example, here is 2052 at mndu2: 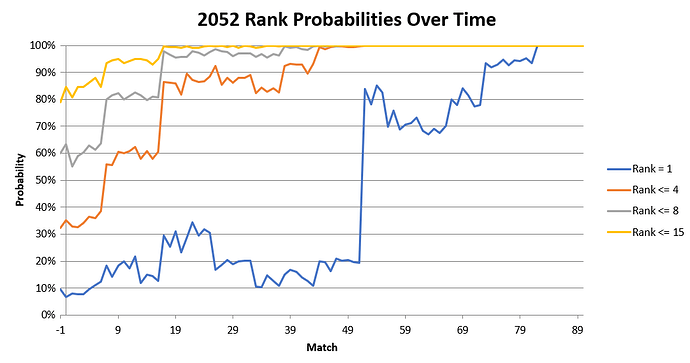 2052.png988×520 36 KB
They have some very good matches in q7 and q17 in which the model learns they are competitive and can get the HAB RP consistently. Winning but not getting the HAB RP in q26 doesn’t really affect their top 4, top 8 or top 15 chances since they still won, but their chances of seeding first takes a hit. Through match 51, they lock in their chances of seeding very high, but not much changes in their 1 seed race as both they and 525 continue winning and getting the HAB RP. Everything comes to a head in q52 though, where 2052 comes in as an underdog, but manages to get BOTH bonus RPs and win, and not just against any opponent either, but against 525, who they were racing for the 1 seed. After that, 2052 is 2 full RPs up on 525, and slowly lock in the 1 seed through the end of the event.
For another story, here’s 1410 at okok: 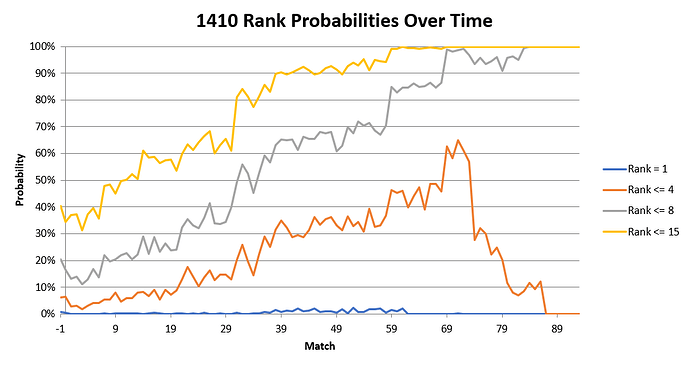 image.png995×527 37.9 KB
Unlike 2052, who the model would have guessed would rank in the top 8 going into the event, 1410 comes in not even expected to get top 15. They don’t quite have as many flashy matches like 2052, but instead you see a slow but steady climb up the rankings as they win matches but don’t get bonus RPs. There’s a solid jump to the top 15 chances in q31 where they get their sole bonus RP. THere’s also a bump to the top 4, top 8, and top 15 at q59 where they win an underdog match. You can see their top 4 chances getting reasonably high until they lose q74. Their top 4 chances then drop to 0 in q87 when 2996 and 4523 lock in more RPs than 1410, which locks 1410 out of the top 4. One last note, the noisiness of the continuous ranking projections will go down as you select more simulations to run. The above graph for 1410 was created using 400 simulations at each point in time, and the one below was created using 1000: 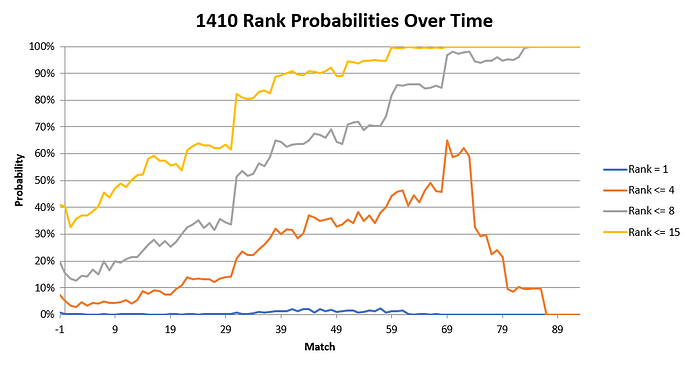 image.png993×526 32.1 KB
This is clearly the same graph, but it’s much more smooth and 1410’s matches stand out a little better. So give this a shot for your team and make sure the “story” being shown matches up with what you would expect. I really love these graphs, so I hope you all do as well.

Both skill metrics, Elo and predicted contributions, update with each match. So if a team improves those metrics in a match, the probabilities of winning all future matches will increase. Simulations are still run “cold” though, in the sense that in all simulations, a team’s “true” rating is assumed to be their current rating. Someday I’ll make simulations run hotter, which would let the simulator consider the possibility that the team’s actual ability is greater or worse than their current ability, but that’s a non-trivial problem, and I have other shortfalls I’d like to address first.

Absolute scores don’t really have much impact on the predictions, it’s only relative scores/performance that matter. Since everyone improves at roughly the same rate (or at least, I wouldn’t know how to predict who’s improving faster) I’m unsure how I could use this information to improve future comp predictions.

Those ranking projection graphs are super cool, I love that feature. One of the things our team used the event simulator for last week was to graph how our contributions to certain metric changed throughout the event. This was mainly used post-event, to see how we compared to other teams at the event, and to see where our performance was trending up and down. As a potential future feature suggestion, I think it would be cool to have a chart that you could select from a drop down list of all the metrics, and plot the teams performance over the course of the event. Maybe even overlay two teams on top of each other to see how they compare.

Updated seed values through week 2. No other major changes since v1.1.

As a potential future feature suggestion, I think it would be cool to have a chart that you could select from a drop down list of all the metrics, and plot the teams performance over the course of the event.

That sounds pretty cool, I’ve already got most of the structure for that with “continuous ranking projections” so I think I can add this without too much work. I’ll try to add it in sometime soon.

Will this work on google sheets as well

No it will not to my knowledge

Caleb the simulator improves it accuracy with each round of a competition. I am curious about when the data levels out to say within +/-10% of the OPR. My observation indicates round 5 or 6 of a 9 round event

I want to write up a good response for this, but won’t have time for a while. My quick back of the envelope calculations would say this would take about 2/3 of the event to occur. It really depends how good the seed is though. If your seed is already within 10% then you can get there before match 1, if your seed is awful though it will take most of the event.