Hi
I was wondering if anyone had any ideas on how to go about building a tank tread robot that can climb stairs. How do I determine how high the treads should be, etc? Ideally, it would end up being able to carry a laptop and enough battery power that it can roam the halls of an office building for a while. Any ideas?
Thanks

I think JPL’s Urbie robot has done it the best of any I have seen. (do a google image search for jpl urbie)

The Mythbuster guys made a Vex one http://www.botmag.com/articles/mythbusters_test_the_vex_robotics_design_system_1.shtml but I wouldn’t expect it to be climbing staircases.

I think JPL’s Urbie robot has done it the best of any I have seen. (do a google image search for jpl urbie)

Just FYI, Urbie in based on iRobot’s PackBot mobility platform.

the general rule for climbing stairs if you don’t if you don’t want to have a special device for lifting above the lip is to make the diameter of the wheel/tank sprocket large enough so the axle is above the lip of the stairs. Normal steps are approx 8 inches so most anything larger then that will be able to climb.

In my opinion, the most frequent mistake made by folks who are trying to design a robot to climb stairs is that they do not thinking about CG management.

It is relatively easy to get a chassis to climb a staircase. It is often much more difficult to have a robot with an arm or other tall mechanism not fall over while the chassis climbs the stairs.

Think about how your center of gravity moves as your robot climbs the stairs. If your CG ever gets behind the rearmost point of contact with the floor, you robot WILL tip. Even if it gets close, dynamic effects and other robots often make it likely that the robot will tip.

I highly recommend “wheelie bars” or other mechanisms to catch you if you tip. Even betten, I recommend trying to design a your stair climber so that you can climb stairs while keeping your CG between the wheels.

Or, you can add an angle to the front of the robot with smaller sprockets on top and bottom, such as this one for the game where we had to drive up onto the puck.

As important as the treads is where the CG of the robot is; in G’doinkle (shown in the link) we had a minimum speed that we hit the puck in order to have the angular momentum sufficient to overcome the force that was trying to flip the robot backward as we drove up onto the puck. Gary Jones (one of our engineers) actually calculated that speed and we proved his calculations by experiment. Remember that “stairs” is different than “stair” - you not only have to get up on or over one, you have to keep driving at that angle.

plus there’s real bits of panther in it, so you know it’s good.

The MythBuster’s Vex stair climber looks pretty cool. Maybe you can get ideas from that. The most important thing though, as it has been said before, is CG management. If the robot tips, it is most likely going to fall down the stairs. Another possibility would be something like the stair climbing wheel chair designed by Dean Kamen (can’t find a link).

Another possibility would be something like the stair climbing wheel chair designed by Dean Kamen (can’t find a link).

The wheel chair that Dean invented is the Independence iBOT 4000. You can see a cool video of the iBOT climbing staircases here. 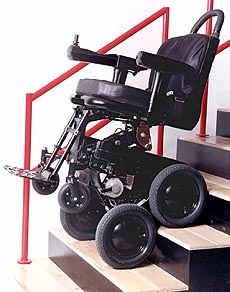 I should clarify…
It would hopefully be able to climb a long flight of stairs, not just one. Thanks so much for everyone’s advice, it’ll really help a lot!