On March 16th, 2019 (Pacific Time), The Blue Alliance went down for 3 hours from ~21:00 to 23:59 due to a combination of overrunning a daily budget cap set on the tbatv-prod-hrd Google App Engine project, and an error in the Google Cloud Console that prevent increasing the budget. This prevented usage of the website, API, and signed-in usage of the iOS app.

This document is a postmortem diagnosis of what went wrong, and what steps are being taken to prevent similar issues in the future. https://github.com/the-blue-alliance/the-blue-alliance/issues/2464 is the parent issue to track follow ups from this incident. We are sharing it publicly so others can see a postmortem process, and better understand how TBA operates.

For around 3 hours, users were unable to use The Blue Alliance website or API. The Blue Alliance for iOS app crashed on launch for users signed into the MyTBA feature, resulting in ~1500 crashes for ~300 users during the outage. 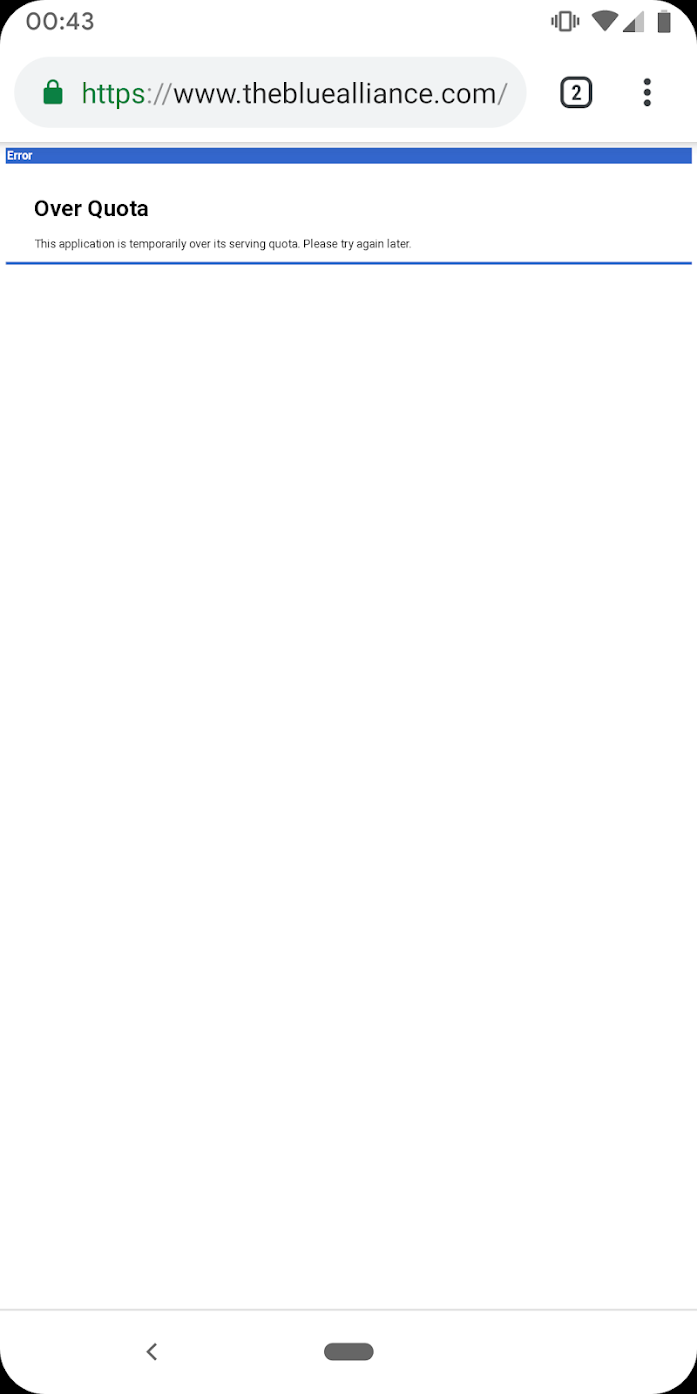 Over Quota Error. This is what visitors to The Blue Alliance site saw during the outage. The 3rd party and mobile app APIs were also down. Some pages would continue to serve if users hit CloudFlare caches instead of reaching the Google App Engine server. 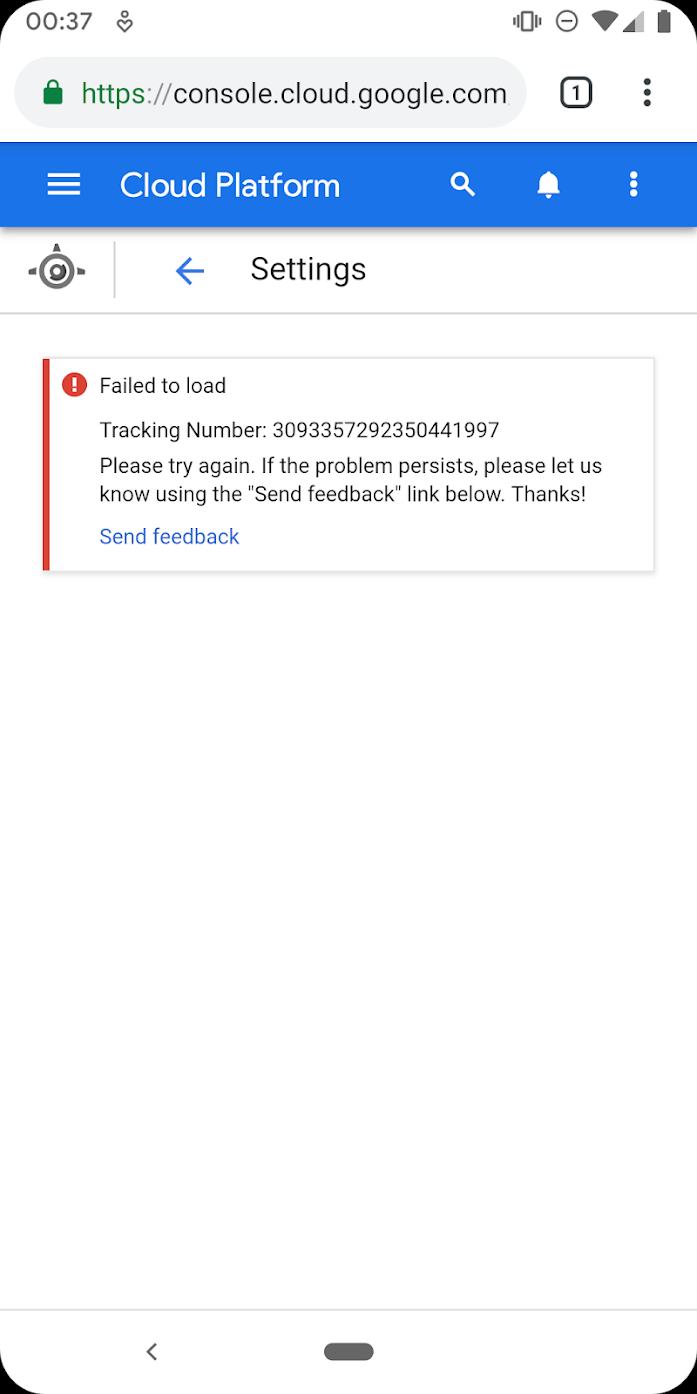 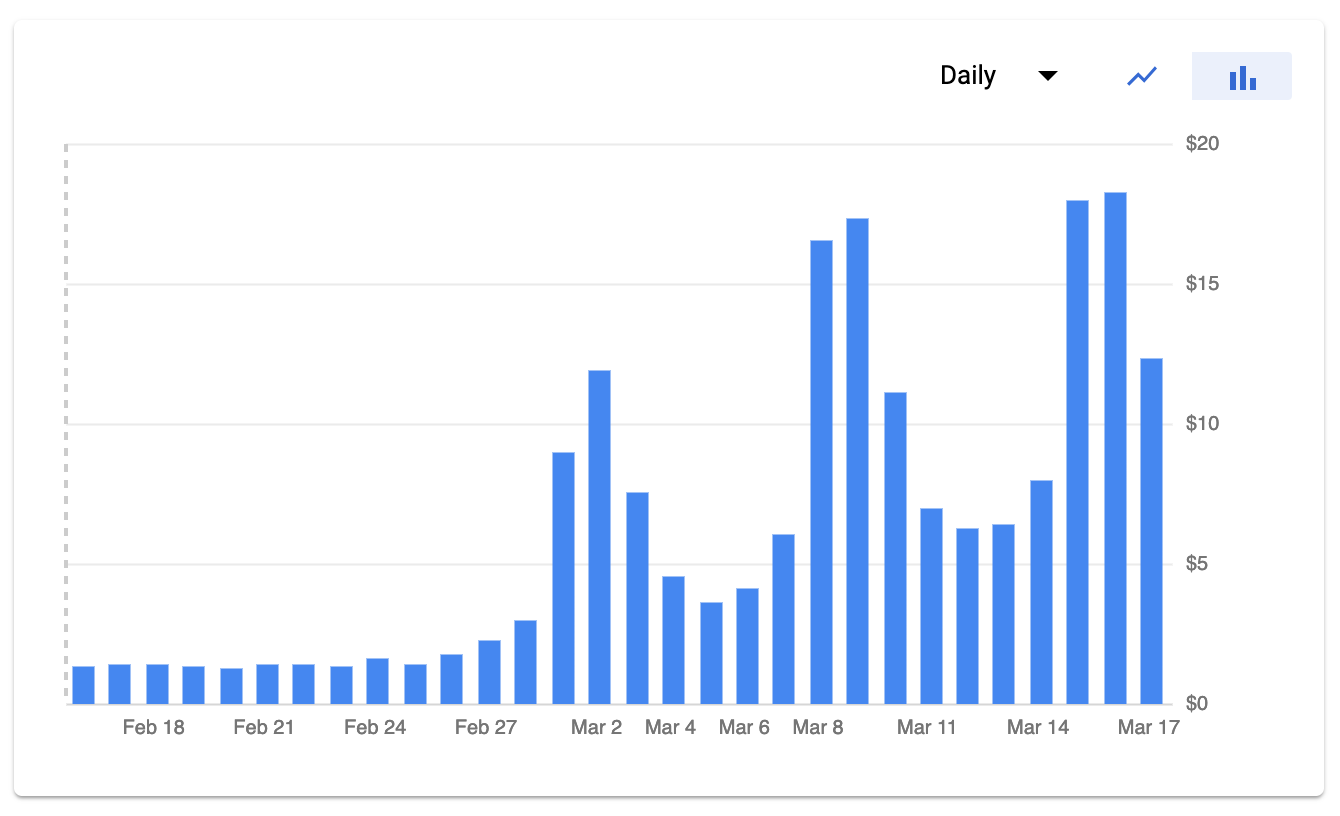 How did you know something was broken? Did you have alerting to find it for you, or did you need to rely on humans catching/reporting?

How hard was it to get the right people in the room to fix the problem?

Eugene messaged Greg on Slack and Facebook Messenger. Greg had Slack Notifications on his phone off, and did not have his laptop with him. It was a fluke Greg was awake, given the late hour.

What did you do to fix the issue? How hard was it? What could we do better?

Greg attempted to increase the GAE daily quota, but was stopped by the erroring settings page.

We waited 3 hours until midnight pacific time, when our Google App Engine quota reset. This restored the site. The GAE settings no longer errored, and Greg increased the daily quota.

Eugene should have had permissions to fix this problem himself.

What tooling/code/process improvements should we make to have prevented this in the first place?

We were surprised that the site went down, and it was detected by an admin experiencing an error, not by proactive alerting.

Admins Did Not Have Permissions

Eugene discovered the issue, but only Greg and Phil (who were in Eastern Time, where it was after midnight) had permissions to increase GAE quota. It was a fluke Greg was awake and available, as he was away from home for the weekend.

We have no human contact at Google to escalate technical issues to. In the event our GAE settings continued to error, we would have no remediation path to fix the problem. This could present a problem for similar issues in the future that might require intervention by a Google employee to fix.

The TBA mobile apps cache data locally, so should continue to work even if the server is down. However, the iOS app attempts to sync push notification tokens for signed in users with the MyTBA endpoints on app launch. The iOS app was expecting a valid responses from the MyTBA endpoints, which resulted in users crashing on launch.

Thanks for writing this up, @Greg_Marra!

I want to stress the value of a productive and open incident management culture and hope that we can turn it into a useful learning experience for the rest of the community. Many of the TBA devs do this at our day jobs. Many of us run large production services at scale and try to apply some of those lessons to TBA.

So, if anyone has any questions or would like to discuss what it’s like to run TBA operationally, please don’t be shy - we’d love to have those conversations.

Thank you for posting this! This was actually really interesting and insightful to read through and really informative.

And thank you for what you do to keep this site running!

Nope, although that’s probably something we can publish (cc @Greg_Marra).

I don’t think we have yet, although I’m willing to buy the theory that it’s due to added load from the iOS app’s this year (nice work, @Zach_O

). Unfortunately, I’m not sure we have good enough attribution to really know for sure.

This is an excellent idea - we should be able to at least instrument some basic stuff, like overall number of requests per key. The api keys all already live in the db and need to be loaded on every call, so we’d just have to add in a write (and maybe blacklist this for some really heavily used keys as a savings). I bet we can also track some more advanced db usage stats (or something that at least roughly correlates to TBA cost, like total number of bytes in the response). Big caveat being this can’t ever be prefect accurate due to the CloudFlare edge cache (most requests don’t actually hit a TBA webserver).

Have you identified a root cause for the spike? Was it the load from the new iOS app, API queries from the community, or simply that TBA is getting more popular?

There wasn’t a particular spike – you can see in the cost per day graph that our usage has just continued to grow steadily, and we eventually crossed the $20/day point I had set our GAE budget to previously. We’ve seen growth each year in total visits to TBA – the iPhone app is extremely exciting to have available, but doesn’t create a large increase in total costs.

Is there a public breakdown of expenses (I’m thinking GCP/GAE, marketing), along with revenue in?

This is something that could be fun to compile at the end of this competition season as a recap.

Thank you for posting a good post-mortem. While the details are not important to me, the post shows students not yet in the real world what should happen (most) every time a problem is reported. In business, a glitch like that can lose you money, lots of it, so understanding the ‘smoking gun’ and archiving what was learned (as opposed to keeping is as Tribal Knowledge) is important.

Did you guys just make up this whole story to guilt me into adding better caching to my event simulator?

We may work on better API insights at the API key level, both for efficiency reasons (although we’re not worried about the cost of providing the API to the community right now), as well as just to better understand how people use it so we can improve it!

I am one of those people who unnecessarily queries the API - but I’m trying to improve, I promise! A few weeks ago, I was thinking that it would be great to know how much I am using up, especially by API Key. I split up all of my various projects into different v3 keys so knowing which projects are querying a lot would be a great leak-detection so I know if I need to kill an old key or application.

Would love a leaderboard of those who least efficiently query the API, I’m sure I’m near the top and could use some public humiliation. /s, sort of

Notifications – The Google Cloud Monitor bot in Slack should alert the channel. It doesn’t seem to have this functionality, so we may need to hack something else.

In case you’re unaware, Slack has per-channel notification settings, so a simple solution to this could be for all relevant parties to enable push notifications for all messages to your #monitor channel. I’m assuming that there’s nothing you’re sending in that channel that shouldn’t ping you.

Slack has per-channel notification settings, so a simple solution to this could be for all relevant parties to enable push notifications for all messages to your #monitor channel.

Thanks for pointing this out! I’ve enabled them for myself and set the channel topic to encourage others to do the same.

Additional impact - 604’s scouting meeting was interrupted while Eugene tried to figure out why TBA was down.

More constructively, there was a blog post in 2017 about reducing the impact of API queries on TBA. It would be helpful to know if that advice and those tips are still relevant and if there’s anything else us API consumers can do to be good citizens.