Full disclosure: Team 1114 is sponsored by Innovation First International and receives a donation of VEXpro products each year.

On November 26th we received 6 Falcon 500 motors as part of VEX Robotics Falcon 500 Beta Test Program. We began our testing plan which included swapping the 4 NEO Brushless Motors on our 2019 competition robot’s drivetrain with 4 Falcon 500 Beta Test motors and comparing the performance using a 25ft sprint test and logging the data. We also designed new plates for our 2017 fuel shooter that would use 2 Falcon 500s to power it instead of the original 4 775pro motors.

First we ran five 25ft sprints using the original setup and then we switched to the Falcon 500s.
The switch was a very quick process, especially the installation of the new pinions on the Falcon spline shaft and the wiring became cleaner without having to use separate external speed controllers. Changing the code was also really easy as the Talon FX used the same functions as a Talon SRX. We then ran 5 tests with the new setup and then drove around to see how it handled. We still used a 12T pinion so the top speed of the drive was slightly faster due to the higher RPM of the motor. Here are the final sprint times and graphs made from the data we recorded in a .csv on the roboRIO. 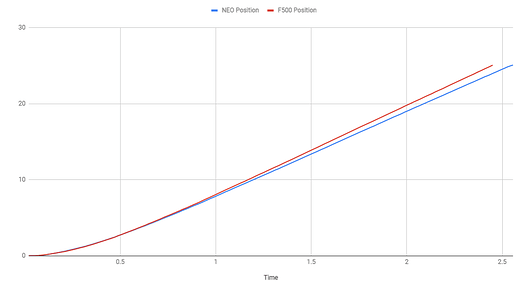 For the shooter we machined new plates, utilizing a 3:2 belt reduction, and installed them on our shooter and then worked on tuning the PIDF velocity control on the Talon FX which was exactly the same as it would be on the Talon SRX that we are familiar with. Because of the slower free speed of the motor compared to a 775pro we didn’t need as much of a reduction to get similar speeds at the wheel. After some rough tuning we were able to get the shooter to around 80% accuracy overall which is similar to our in season performance with the 4 775pro setup but saves weight and reduces the amount of wires that would have to be ran up to the turret. Here are some videos of the shooter during the tuning and testing process.

Despite being an IFI sponsored team, no product goes on our robot without adequate testing. We have been a later adopter of certain technologies over the years, and we tend to be more cautious than some teams. However, based on our testing we’ve ordered additional Falcon 500’s and plan on using them season in appropriate spots on our robot. Feel free to ask any questions about our experience with these new motors.

Anything on thermals? The Discord has whipped up some interesting theories and that seems to be the main complaint from other beta teams.

We never experienced any thermal limits during our testing of either the drive or the shooter.

Thanks so much for collecting this data and providing it to everyone to make their own conclusions. This is a genuine service to the community and I appreciate it

Out of curiosity, what motivated the testing for the NEO to be done at 60A versus stock settings like the falcon? I think it would make more sense for an apples-to-apples comparison, especially given that you’d almost never run either motor without current limiting and I’m not sure if you can set current limits on your units as-is…

Some photos of the Falcon shooter, in case you wanted visuals. (Full disclosure: I used to work for VEX. I don’t anymore.) 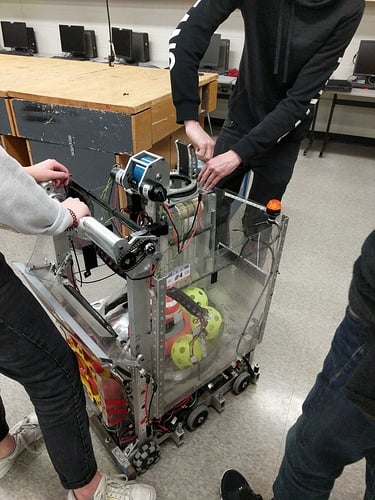 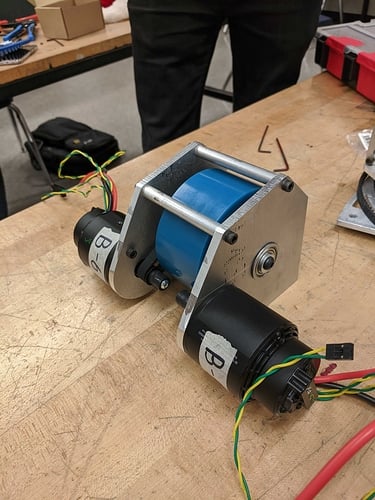 The 60A current limit is what we ran during the season but with our gearing I don’t believe it would make any difference in the acceleration as we were traction limited.

This looks essentially identical to the NEO, sans some negligible differences. Good to see some real data, though.

Has any actual thermal testing being done? Use on a drivebase for multiple successive (simulated) matches? The heat dissipation curves by vex (both with and without use of the cooling port) looked extremely problematic, to the point where I’d be hesitant to use an F500 drivebase on something that’s going to have to drive with an elims-like schedule.

How well did the integrated encoders work? I’ve heard mixed things about those in the neos

Yeah we never used the NEO encoders during the season on our drive and actually just used a mag encoder connected to the RIO just to avoid the chance of any issue. We used the encoder for the shooter speed control and it worked well and having 2048 ticks is definitely an advantage as you go from having a minimum measurable rpm of 71 with a NEO to 1.5rpm if you measure every 50hz.

We didn’t do any specific thermal testing but other teams have. During our time driving around the motors only got slightly warm but our drive ratio is relatively slow. In 2017 our 4 cim 18fps drive would get very hot during long practice sessions so having a cooling port available is nice.

How did you arrive at “extremely problematic”? Those curves look a lot better than what the CIM/miniCIM are doing- have you been hesitant to use those in elims for years now?

After reading the posts, I know you didn’t do any thermal testing, but did you have any graphs of temperature in your drive testing? Our team preordered the FXs and I would like to see any data to evaluate whether we should invest in dedicating a vacuum or compressor to cool the motors.

How did you arrive at “extremely problematic”?

Delta temp w/o decaying by just about half after 13 minutes is concerning to me, especially because you can have 5-6 minute elim gaps. The temperature can be managed well with the cooling port, but it seems like more of a fix than a feature - having to go in and explicitly connect motors to a pneumatic system feels to me like it shouldn’t be necessary. CIMs aren’t great in this regard either, but with beta teams reporting thermal issues with the F500 (while you can nearly torch a CIM and they won’t mind), this is something that’s at the forefront of my mind.

I don’t recall anyone posting actual data from simulated matches/practice sessions - I’ve only seen the 40A test from the user manual. If you know of any else, please enlighten me! If not, it would be great to see some data with and without cooling port utilization, if you intend to conduct further testing.

We weren’t logging temperature during those sprint tests and I doubt you would be able to see much of an increase in only 2.5 seconds of driving with over half of it being under 10A of current draw.

Can you tell me a use case where you have a motor drawing 40 amps continuously for the duration of the match? That test is a bit of an extreme case.

The F500 won’t damage itself and will shut off when the temp gets too high. I was referring to other beta test teams that have done temperature testing but haven’t posted anything yet.

Can you tell me a use case where you have a motor drawing 40 amps continuously for the duration of the match?

I’ve certainly run drivetrain and subsystem (arm,elevator,etc) motors at an average equiv I^2R heat output of 40A continuous. Heck, that won’t even smoke a 775.

I can’t think of anything worse than my drivetrain motors shutting off mid-finals.

Are there any specific numbers for “too high” or ways to disable this safeguard? I’d rather my motors catch on fire the moment the match is over than stop working out of self-preservation halfway through.

We used the integrated encoders last year, we didn’t run into any issues with them.

40A for an entire match would most likely ruin a 775, also the breakers would probably trip too. At the start of the beta test the temp was 80C but a prototype firmware that some teams tested moved it up to 110C so I would imagine thats where it will be.

Can we turn that off? Losing a match because my drive motor decides the third law of robotics is more important than the second law is not ok in my book.