Meet Lori, the 2021 Pandamaniacs robot for the INFINITE RECHARGE at Home challenges.

Lori is our attempt to redo just the essential parts of The Pandalorian, our 2020 robot that seeded 8th of 63 at the Palmetto Regional. The Pandalorian punched well above its weight, but proved a handful for our pit crew. When schools closed a couple weeks after the event, the robot was in many pieces for a heavy maintenance session in anticipation of a rescheduled Smoky Mountains Regional. Once we understood what was coming for 2021, we had two options: try to reconstitute The Pandalorian in all its fiddly low-goal glory, or develop a new concept and pursue the high goals. We decided to do the latter. 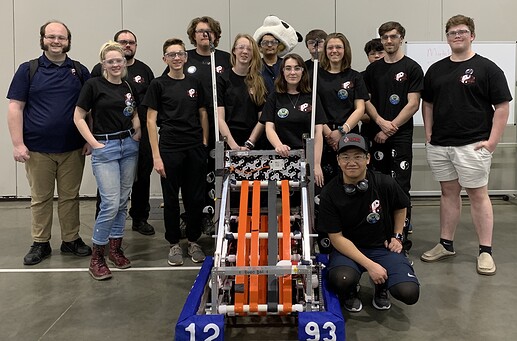 While planning this out, it came to light that 1293 had never fielded a successful shooting robot. The 2006 robot became a defender, notoriously chopped down on Saturday morning for a lower CG. The 2012 robot finished dead last at the Palmetto Regional. The 2013 robot spent more time on its side than on its wheels and was outscored by its human player and thanked its lucky stars the webcast wasn’t archived. With inspiration from teams like 1758, we knew this was the year to reach for the brass ring.

We also knew it didn’t take a lot of shiny things to get the robot to shoot. Once some early-season developments came to light, it sort of became a sport to make this the lightest robot we could. The net result was a full-sized robot with a 59-pound inspection weight.

Lori is running The Pandalorian’s chassis. We did not see ourselves building a separate skills challenge robot with our available resources, so this is a full AM14U4 long chassis running the same wheels from Palmetto in the hopes we get some in-person events down the road. We jettisoned our six-Mini-CIM setup of the last two seasons and converted to quad NEO motors into a Toughbox Mini. It was geared a little too fast for the challenges at 7.31:1 (same as the Mini CIM setup that ran Palmetto), but it proved a lot of fun to try.

Later in filming our skills challenge videos, the drivetrain started squealing in an unpleasant way. We know it’s hurt, but we got the remaining runs shot to ensure we got a full complement of challenges submitted. Tearing down the drivetrain to identify the issue will be a training exercise.

It’s been a bit of a trend on our team to make parts out of cutting boards from Sam’s Club. They’re cheap at $9, they cut easily, we can get more on about a half-hour’s notice, and they’ve proven quite durable as intakes and hatch grabbers. While sketching out shooter concepts, it became clear that we could do the whole shooter out of two of them–a quite welcome development in a year where our biggest fundraisers for the robot budget were canceled. So we did. The whole shooter mounts to the chassis with eight bolts to brackets that fit right on the AM14U4’s two-inch hole spacing, and it’s tied together with AndyMark Peanut Extrusion and 7/8" round tube with tube nuts. The peanut is the anchor point for both the plywood back panel (robbed off our old cart topper) and the polycarbonate hopper floor. It works great for the light amount of compression we’re running.

The shooter runs on four shafts. Balls are controlled by a Versaroller powered by a 775pro into a 4:1 57 Sport we had built up last year for an intake arm we planned to run at the Smoky Mountains Regional. (Both the 775pro and Sport are old stock from past kits of parts, and they did what we needed. Why not?) Past that, the balls are accelerated by two VersaRollers driven by a single NEO 550 motor in a 1:1 UltraPlanetary. The upper roller is geared about 10% faster, which helps separate the balls out along this path. This proved to be the most finicky part of our robot, as some assembly oversights led the Versarollers to rub against the plates until we got it dialed in with flanged bearings. Whoever it was at REV that decided to put current limiting in the SPARK MAX, give yourself a cookie.

Balls then hit the main shooter drum, a NEO driving a line of black 4" AndyMark Stealth Wheels. Despite being a full-width shooter, it accomplished an 18-point Interstellar Accuracy Challenge score on a 2D port on just the second attempt. For a robot that can only score from the target zone, that’s as good as it gets!

One of our alumni saw our CAD renderings in early March on the team’s GroupMe and asked “Where is the intake?” One of the seniors immediately clapped back “There is none! Intakes are for losers!”. We did work on one a bit, but it was one of the things we jettisoned early on as we felt the pinch of bandwidth. (Thankfully, none of our team members have tested positive for COVID–but most of the students have had to quarantine two weeks since Kickoff due to classmates testing positive.) Balls are retained in place with garden netting tied to fiberglass rods, which was omitted in the gif. If we get in-person competition, we’ll work on adding it back.

We had intentions of trying to make direct catches from the goal using garden netting stapled to our goal, then shuttling them back to the reintroduction zone in the robot. In practice, that proved a little too fiddly to do at scale so we modeled off of teams like 6329 and added a chute behind our goal to give our human players (two recreational athletes plus one out-of-shape 34-year-old) the best shot at success.

Well, we were a full-sized target zone shooter in the notoriously stacked Silver Group…and our 2020 driver and lead programmer graduated last spring. You do the math.

Despite a projected finish of 19th out of 29 in our group, we made several large steps in our development efforts and build process. We had only flirted with brushless motors in 2020 when they ended up on our dumpers, but this year all but one motor was a part of the NEO family. The code went from a melange of old cruft going back years to something simple enough that even I could figure out how to make edits and extensions. And while we definitely haven’t wrung out the full power of the SPARK MAX controllers powering all the mechanisms, it does mean our programmers have a no-apologies platform on which to develop for 2022.

We hadn’t sent out meaningful custom parts since 2019, and it’s been a decade since we had sent out for an iteration of custom parts. We completed the skills challenges using our v2 shooter plates, and had CAD complete for a v3 plate that would’ve shed multiple pounds–one that proved too much for the X-Carve router we were bumming time off of. That process of iteration sparked conversations on what it would take to be able to do it in-house. Through a quirk of fate and a grant from the Irmo High School Education Foundation, we took delivery of a new-to-us Omio X8 router just last week. We’re super excited for the opportunities to engage even more students in ways we couldn’t dream of even four years ago when we built our frame, scrapped it for not being square, built another one, and it still wasn’t square.

We could not have completed this robot to the level it reached without the help of many groups.

Our plan is to campaign Lori at at least one off-season event in the Carolinas, but we won’t know details until FIRST announces their guidelines for the off-season. Fingers crossed!

Very big fan of the double wide shooter, glad to see y’all filling the gap after we decided to nix it this year (in hindsight might have been better to keep it and focus on programming tasks, but we really wanted to try the accuracy challenge)

I think the decision to forgo the intake was very smart (but I’m still glad our team had the experience of designing an over the bumper intake). Also the weight is just mind-blown. Last year we were about 90 pounds but even removing the intake I feel like we would be at least 70

I love this robot concept. Double wide 2pt goal shooters were a really simple / elegant solution to the shooting problem in the 2020 game - they could score reliable points at low to mid level events without needing to be so accurate (eg by driving into the wall), they eliminated issues of ball indexing and jamming, and at the highest levels of play they could transition into a ball feeding or defense role. I’m glad you were able to build on the similar low goal concept you had in 2020 to see this in 2021.

I love this robot and I love 1293’s story behind it. Hope to see ya’ll up in Pittsburgh some day!

I think the decision to forgo the intake was very smart (but I’m still glad our team had the experience of designing an over the bumper intake). Also the weight is just mind-blown. Last year we were about 90 pounds but even removing the intake I feel like we would be at least 70

Don’t get me wrong, I wanted an over-the-bumper intake badly. But between the quarantines and opt-outs, it was a minor miracle we got this much done.

The switch to NEO motors cut about 10 pounds out from our 2020 Mini CIM drive. It’s a cheat code. Using the UltraPlanetary and NEO 550 on the accelerator rollers saved us a chunk of weight too, on top of the fact that we’re only basically a shooter mounted on an AM14U4. I think it would be straightforward to get it down below 55 pounds, and maybe even flirt with the low 50s, with a few more adjustments:

they eliminated issues of ball indexing and jamming, and at the highest levels of play they could transition into a ball feeding or defense role.

Oddly, we even did a little ball feeding at Palmetto where the field depth fell off quick; you can see a couple instances of it when we played with 694. The 2020 belt system was borne of a need to Apollo 13 a dumper out of the parts we’d amassed for a FIRST Capital-style shooter that Wasn’t Gonna Happen, and one of the quality decisions was to use the NEOs we’d picked up for the shooter to power those VersaRollers. Gross overkill for the job, but they made the packaging super easy.

With the angle and spin of our shot, The Pandalorian would be a better feeder than Lori as she sits–we had a couple shots bounce back into the robot before we put the netting back on. But I think it would be trivial to bend up a polycarbonate hood and mount it to some of those leftover holes on the top row of the side plates to make that shot more forward when required. (You don’t know how glorious it is to be able to throw extra holes in on speculation until you can do it without your kids thinking it’s busywork.)

Hope to see ya’ll up in Pittsburgh some day!

I’ve only visited Pittsburgh for a couple hours in the dead of night, a transfer from Amtrak to a bus on the way to IRI. It’s a little outside of activity bus range for us, but never say never the way things have been going lately!