Gearing remained the same as our miniCIM drive for convenience (7.2:1, 4in wheels). For 4 Falcon WCD tests, the third falcon on each side was unplugged and allowed to spin freely.

Our drivetrain testing involved both closed-loop and open-loop performance.

Open-loop performance was measured with a sprint test. We used a 4 Falcon WCD setup for our sprint tests, as 6 Falcons caused severe carpet slippage due to excessive torque at the chosen ratio. Our results: 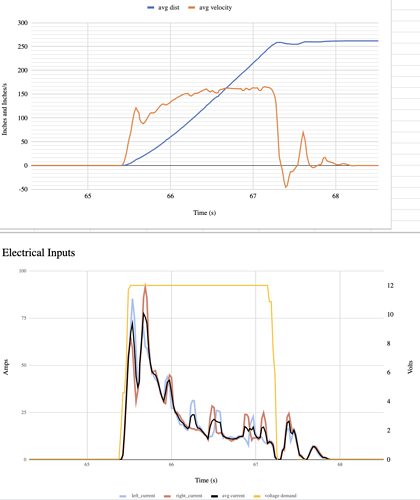 A variety of spline auto paths were run to determine closed-loop performance. Particularly important to us was consistency in terms of real-world measured “error” with auto paths that had high accelerations. Driving consistency was key in games like the 2018 PowerUp where consistent high precision (without reference of a vision target in most teams’ case) was required to intake cubes throughout nearly the entire 15 second autonomous period. That consistency comes from an effective control loop, dependent both on the internal encoder on the Falcon and the linearity on the motor for predictable characterization.

Drive path following was more consistent than our MiniCIM drive at similar acceleration/velocity/voltage constraints. Paths were followed using a Ramsete controller, and a simple kV, kT, kS style feedforward model characterized to an r^2 north of 0.998.

We were pleasantly surprised at the real-world repeatability of drivetrain trajectory following. The consistency was apparent with a high curvature spline going 60 inches forward and 30 inches to the right, which ended within 0.25in of real-world error. Video of the spline:

The wrist gearbox was modified to provide a 72:1 reduction, as compared to the old 254:1 reduction when it had been used with a 775pro. Both wrists were controlled using the MotionMagic control mode provided by CTRE (a trapezoidal motion profile). We got the desired accuracy on the Falcon wrist with a P gain and theoretically calculated F gain.

A video comparison of the two wrists where both control loops tuned to peak in the 9-12V range (falcon on the right):

When the motion profile was tuned to aim for a similar speed and acceleration (making the falcon peak at 6-ish V) as the 775pro wrist, the falcon proved far more efficient. 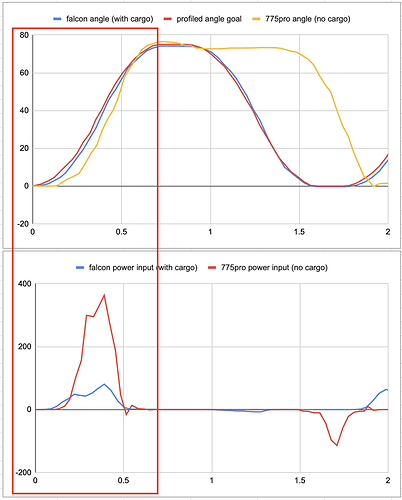 Nearly the same position vs time for both wrists (in the red box), but the Falcon one is a bit faster with more load (carrying a piece of cargo). This means the Falcon wrist is following a harder energy path. Yet, the falcon needs about 25% the peak power input.

The cargo intake with Falcon 500 was geared to 3:1 reduction via a versa planetary. The system formerly ran a 775pro with a 10:1 reduction. We saw no noticeable performance improvement between systems.

Feel free to ask any further questions regarding our results beta-testing these motors.

I’m very happy to see a lot of independent testing and quantitative data with this product release, whether encouraged by Vex or simply to help the community.

It’s definitely been encouraged by vex and CTRE. They were asked early on about what we should share, and they told us to be open about the testing. With regards to motor thermals, it’s still premature to talk about them. In the spirit of openness, I’ll say that the early firmware supplied to teams was overly conservative and was affecting some of our testing. New firmware dropped a bit ago to certain beta teams, with the release to all beta teams just happening last night.

So while the performance of the motors is as the beta teams have shown (and as advertised), the motor’s thermal performance with the new firmware hasn’t been vetted by many teams yet.

I’ll say that the early firmware supplied to teams was overly conservative and was affecting some of our testing.

Could you clarify what exactly you mean?

edit: I take it you meant the 80C limit that Jishnu posted about

I can’t say much about thermals over the course of it running as we didn’t continuously log thermals, but after 1.5hours of mostly continuous driver practice without defense a 6 Motor WCD didn’t cross the 55C mark (with a very conservative 80C internal limit that the beta motors came with). Our position controlled wrist barely ever got above 35C.

None of our motors thermal faulted due to high internal temperature while running.

Certainly. We were testing far outside the norm of a first team. If you’ve seen the Falcon screaming video, we actually had the robot clamped to the table and were stalling the motors. I believe the highest short term current draw we saw was 120 amps for one motor with the rotor stalled. The temp protection set at 80C would occasionally kick in preventing us from testing the motor to destruction.

Disclaimer: We have been sponsored by CTRE twice.

This means the Falcon wrist is following a harder energy path. Yet, the falcon needs about 25% the peak power input.

Outside of the nominal benefits of the Falcon that have been discussed elsewhere, these two performance observations have got me really excited for Falcon 500’s in 2020. More reliable autos, and lower power draw on mechanisms, will result in more reliable performance in real matches.

These are things we really care about on 1678, which is why we put these tests at the top of our priority list. We are grateful that VEX/CTRE gave beta teams the leeway to test their motors in ways that matter to us.

This is great data, thanks guys! That wrist joint comparison is awesome. Definitely a stark difference between the two. Was there any Falcon vs NEO testing done?

Have you check the position error also on longer paths? (As you described 2018 auto routines for example)

For acceleration & current draw charts, do you have a chart for your original mini cim setup to compare?

@Michael_Corsetto is the faceplate on this motor plastic as being alleged in other threads? This seems highly unlikely to me, but you should know.

Have you check the position error also on longer paths? (As you described 2018 auto routines for example)

For acceleration & current draw charts, do you have a chart for your original mini cim setup to compare? 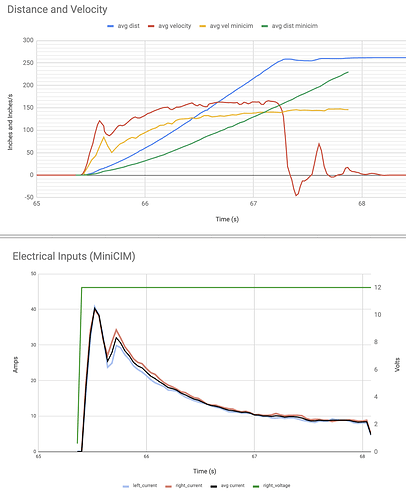 Thanks, I was worried.

@Jishnu.Sen on your distance and velocity graph for the MiniCIMs posted above, is red and blue 4 Falcons and yellow and green is 6? Mini CIMs?

Was there any Falcon vs NEO testing done?

Nope. We could try putting a NEO and different gearing on the wrist (the neo cannot support a 8t pinion which we used with the Falcon on the wrist).

Our testing has been sped up by the ease of using the Talon SRX class with the Talon FX (our 2019 robot used Talons SRX’s). We would need to do some additional software work to get the NEO running on the same wrist, but it’s not out of the question. If we have spare students on our Thursday season-prep meeting, we’ll see if we can make it happen.

FWIW, it’s TBD if we even use the active cooling ports on the motors this season.

We’ll likely build the capacity to do so (vacuum set-up on robot cart and shop air for practice sessions). However, if our 2020 experience at all mirrors the combination of our past season experience + Falcon beta test performance the past month, we are comfortable with a default 80C thermal limit.

How would a vacuum setup work? Would it be set so it would be sucking air out of the falcons? And why not shop air in your pits and just use that instead of a vacuum pump?

The vacuum would suck air and pump would likely be powered off a 12V FRC battery on our cart. You can push or pull the air through the falcon, it won’t really matter one way or another.

We won’t plan on having a pit air-compressor (shop air) at competition, as this can be hit or miss legally with inspectors/safety advisors/event organizers. We’d rather avoid headaches with event staff when possible.

Couldn’t you theoretically port your exhaust manifold through the Falcons? If your running and air cylinders every time you open and close one you’d be cooling the motor a little

I hadn’t thought of safety advisors/ inspectors, etc since I was thinking to use shop air in our pit. Now that you mention it, is there an offboard vacuum pump you would recommend using with the falcons to cool them in between matches?