Presenting our 2021 robot “Eris” for The Infinite Recharge at Home challenges. Hope to see and compete with you all in person some time soon! 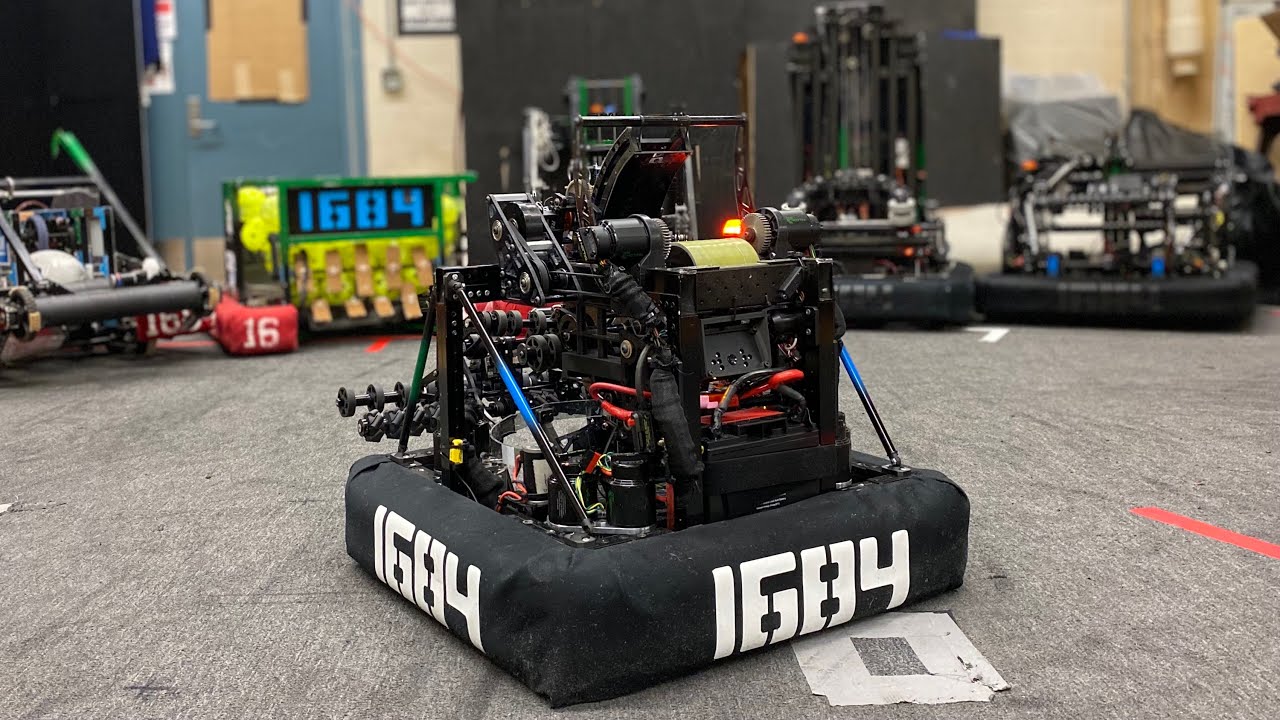 Ignore those dirty bumpers! Our carpet has taken a real beating and we forgot to clean the debris before filming!

Long hours and tried to squeeze this in in between!

Wow, thank you so much for that side by side overlay shoot of the two robots running that course, that was amazing to see.
As someone who stared at individual frames of your last video for way too long, this is phenomenal to see the changes.

Kudos for a great video song.

Oh, and a pretty cool robot to go with it I guess.

Thank god you approve Nick, I was worried

what is that light under the robot?

Love the robot. Those hyper drive challenge times are unreal!

Out of curiosity how big is it, frame dimensions?

Thanks! Those mk2s do some real work!!

I’m glad you like it! It’s a great way to see what you can improve on! You get to see where your slower times are catching up on your faster ones. Got the idea from Mario Kart though lol

Can you provide some insight on the rapid development of this robot? Four days to design and one week to build is incredible.

How much was repackaging 2020 elements vs. making smart decisions in the design to build something once and run with it?

You have no idea how relieved we were when we saw your chassis size, we thought we made ours too big still!

You could have made it a little smaller…

Amazing what you have packed into that robot and those HyperDrive Times!!!

Aiden (@SonofBeans) will reply with all the mechanical and other details, but as one of the lead mentors, I wanted to give him huge props here. He approached us (myself and @JonUren1684) with the idea to build new, thinking we’d say no due to time constraints. But we discussed everything, figured our schedule, an exit strategy of things did not workout and said yes.

He took on the challenge of designing with some input from others.
Let’s just say we’re not sure he slept.

We scheduled the build with each section and had time to powdercoat in between due to being quarantined for a week. This happened right after we built it and had electrical in over a weekend. We grabbed the bot, two people who tested negative took it back apart and our color wizard did his awesome job. So we actually had to put it back together and rewire the day we were able to come back to our room.

We’ve had a much smaller group this season due to everything, but they’ve been insanely dedicated putting in a lot of long days.
Super proud!

We stuck with what we knew. We used the same swerve modules as last year, we already knew how to make a spindexer, and we had used mechanums to control game pieces in the past. We literally took the shooter of our 2020 bot and put it on this one. As for the assembly, we tend to build with all of our pieces ready to be put together, our CAD open, and basically build the robot like a lego set. We are typically able to put the chassis and upperstructure together in a weekday meeting.

There was a constant idea of making parts have multiple ways of doing the same thing, giving us more options in case if one of the ways doesn’t work. Its as simple as having multiple mounting holes in a plate or printing a custom shaft collar to adjust the height the indexing plates are at. It’s much better to cut the plate once and test multiple options at a time than to full send it with one option and have to re-cad the plate and test again.

Hope that makes sense! Can’t wait to see what you guys come out with

Thank you! It means a lot!

This is a masterpiece. I love every bit of this robot.