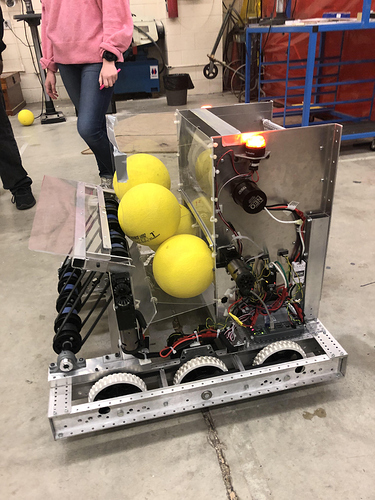 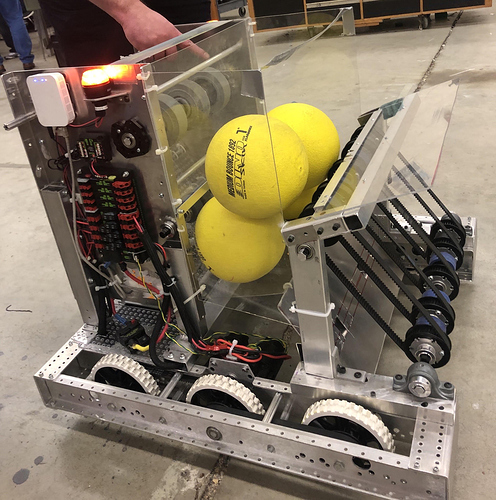 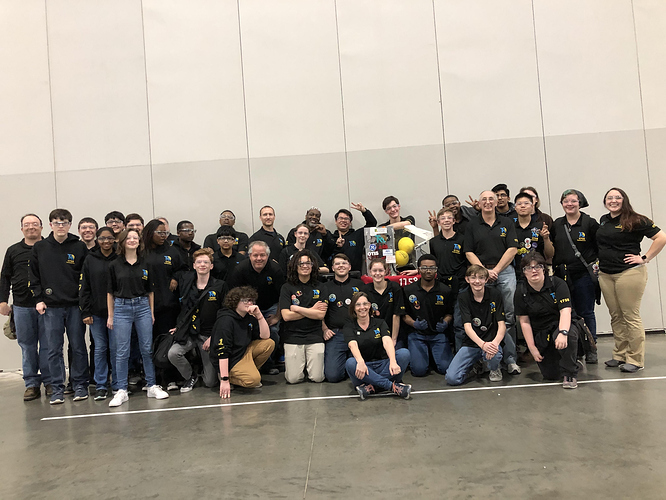 unnamed4032×3024 1.11 MB
I planned on waiting until we finished our planned upgrades for the robot, but since that won’t be anytime soon I thought I would just do it now.

Drivetrain:
KOP Drivetrain with Falcon 500s instead of cims

Intake:
Front cut out for a fixed, double-wide intake using wheels and timing belts powered by a 775pro. A ramp for the human player station.

Feeder wheel:
775pro with a versaplanetary encoder powering a shaft with stealth wheels.

Double shot:
We knew indexing the balls would be difficult and we would struggle to hit the inner port reliably so we decided to intake two at a time, store them in two lines, and shoot two at a time. This worked very well leading to no jams that couldn’t be fixed by reversing the intake for a second and a very fast and accurate shot that also occasionally hit the inner port.

Where to shoot:
We only shot in the target zone which worked out very well, simplifying what the driver had to do since he didn’t have to worry about anything besides hitting the wall and pressing the button to shoot

Trench Run:
We decided to go low because we worried about getting stuck on balls in the rendezvous, and going through the trench also allowed to greatly decrease our cycle time.

Climbing:
Last year we bit off much more than we could chew so this year we decided to keep it simple only shooting. This turned out to be very risky in a game where the endgame was so valuable. However it paid off with us becoming a fast high shooter and the only team in the playoffs at palmetto without a climb. We were working on adding a climber for smoky mountains and champs, but, as you can probably guess, progress on that has stopped.

It was a heck of a machine, and to get picked without a climber it had to be. Sorry that your Championship plans were dashed, but hopefully we’ll see it ride again at SCRIW.

Thanks! We’re excited for SCRIW (fingers crossed this calms down soon). I took your minimal design talk to heart with this robot

I was really hoping someone would go for a double wide shooter. Early on I thought it was a great viable strategy with a simple mechanism that could potentially lead to quicker cycles than a single shot. Glad to see someone did it!

4020 had 1758 ranked 13th in terms of total point contribution at Palmetto. OPR had you at 11. Your shooter was money! What fortune for us and 694 that you were still available with the 24th selection in the playoffs. We felt confident that pounding in all those outer and a few inner port shots and continuing to do it all through endgame would be worth the tradeoff of no climber. Blue banners show the gamble (although it really wasn’t one) was worth it. You had a simple and reliable machine that just worked. It was a privilege to play with you.

Where’s that blue banner in your team photo? You need to display that thing proudly. You contributed a lot to getting it.

Thanks for the compliments. That photo was before awards. It’s sad we won’t see y’all at Houston this year but I hope we’ll see you again next year at palmetto or smoky mountains. 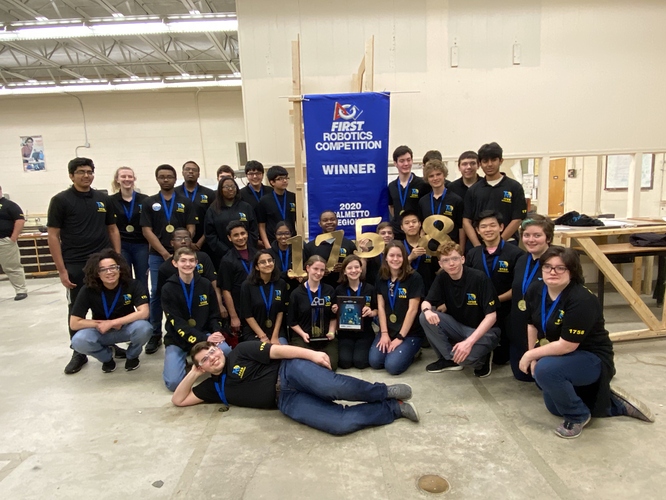