Here are some photos of our assembled drivetrain. Bellypan with wired electronics should be attached tonight (if we don’t get snowed out.) Weight, as shown, is 34 lb 8 oz. We base the drivetrain on the superlight chassis, from team221.com, in the short configuration. Last year we used their gearbox plates and Andymark innards for a two speed shifting transmission. This year we are trying the two speed ball shifters from VEXpro. Wheels are 4" colsons, on hex hubs from wcproducts.net. Frame perimeter dimensions are 27" long x 28.5" wide.

Looks pretty solid. I’m not sure that going super-lightweight is a good idea for balancing issues, but it does save a lot of weight resource for manipulators. (I’m biased though, team 4265’s drive train is particularly heavy this year.)

Is it a center drop? What kind of method did your team use to decide to use this drive train? Any particular design brainstorming? How long have you been using colsons, and what were you using before? We’ve been using the vexpro ball-shifters for a while now and really like them. How has your experience been with them so far?

Edit: How long did it take you to 1. Get all the parts? 2. Assembly the drive-train?

What’s the plan for anti-racking structure?

Nice design! Are you concerned at all about the wheel mounting plates slipping?

Glad to hear you guys in particular like the VEXpro 3 CIM shifters. Loved the single reduction last year but we haven’t gotten our order in yet to try them out (and hopefully the snow won’t push the date back any further). Looking very clean and simple. Hope you guys do well this year. See you in Richmond around this time in 2 months!

Glad to hear you guys in particular like the VEXpro 3 CIM shifters.

Those are 2 CIM shifters.

Love the ballshifter mount, I’ve been waiting for a team to do that for a WCD.

Those are 2 CIM shifters.

Reading is hard for me.

Sorry for the lack of follow up. Meetings all morning, then work closed for anticipated snow. We’ve been in the shop all afternoon, anticipating a canceled meeting tonight. I’ll give better responses when I get to a keyboard, rather than a touchscreen.

Q: What kind of method did your team use to decide to use this drive train? Any particular design brainstorming?
A: Rather than choosing from the entire design space of possible drive drains, we limit our choices to ones we’ve used recently or have developed in summer projects. We try to order parts for our preferred configuration ahead of the season, and only deviate from that choice if the game makes it necessary to do so. Pre-buying COTS parts is the only way we can compete against teams with extensive CNC machining capabilities. I outline our philosophy in this presentation. Our decision is made on kickoff day by asking, “Can we play the game with this drivetrain? Yes? OK, let’s start assembling.”

Q: We’ve been using the vexpro ball-shifters for a while now and really like them. How has your experience been with them so far?
A: We like the price and the weight. Our summer project bot didn’t have enough runtime for us to evaluate the ball-shifters before kickoff day, so we took a chance and went with them based on positive feedback on the net. We were pretty disappointed that just before kickoff Vex raised the prices and removed the shifter cylinders from the kit, increasing total cost substantially. We may switch back next year.

Q: How long did it take you to get all the parts?
A: We try to order our drivetrain parts at least a month before kickoff, to avoid the rush. This year we were a little late with the vex order, and didn’t get it in until about a week before kickoff. I think the gearboxes came during week 1. We weren’t sure what the robot size rules would be this year. We had a set of 37" team221 side rails which we did not use last year. We put off ordering our 27" rails until kickoff day, hoping the rules would change back to larger robots and allow us to use the 37" rails.

Q: How long did it take you to assemble the drive-train?
A: Drive train was mechanically assembled Monday of week 3. The rails from team221 were made wrong and required rework to assemble properly. Without the rework, the drive train would have been assembled Thursday of week 2. 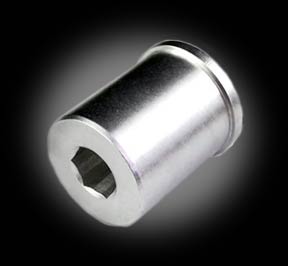 Q: What’s the plan for anti-racking structure?
A: Last year we used a belly pan of 1/16" garolite. That proved to not be durable enough. This year we’ve switched to 1/8" perforated lexan for the belly pan.

Q: Are you concerned at all about the wheel mounting plates slipping?
A: One of the really nice features of the team221 superlight chassis design is that the bearing blocks are tensioned by 1/4-20 SHCSs running axially through the side rail tubes to the frame corner blocks. The combination of these tensioning screws and the clamp plates is extremely effective in maintaining chain tension. Since we built our 2013 competition bot, through two regionals, two off-season competitions, and probably 60 hours of operation during demos and summer practices, we never -not once- had to re-tension the chains. During that time, we neglected to re-grease the CIM pinions, and wore the teeth off of all four of them. But never had to re-tension the chains.