This was our first day of practice. We use 4 small cims to drive and a vandoor motor to rotate the arm and a small fisher price that sucks.
We were in the high school’s library.
And yes it sucks very well and is hard to pull off.
We have four sonar sensors that are being coded right now that are being configured into a dashboard to help the drivers see where the ball is in relation to the dome.
Also this vacuum is half as powerful as our real one.
If you have any questions just post away and I will answer them.
Good Luck to all teams from 2415 Westminster WiredCats Robotics

That was AWESOME! You do suck!

That’s an amazingly good design, especially for a rookie team.

Wow, that is a really cool design!!! Never would have thought of a sucker design!

our team experimented with vacuums using last year’s venturi generators, but our suction never worked when the suction cup was on a seam…

how did you get around that? just used more suction?

anyway that is an awesome design! you should think about maybe putting a piston in there to give the ball a little push when releasing

Haha yeah we would if we had the weight. We are like 7 pounds over weight right now but we should be under by the end of today.
And we just used more suction. The actual suction dome that we are going to use is run by a fisher price on a one to two ratio so our turbine spins twice as fast.
Thanks and good luck to all teams.

That is the suckiest robot I’ve ever seen

that is super awesome

That looks pretty cool. We are doing something similar and I’m wondering if you could post up some pics to compare our systems.

Good luck and I can’t wait to see it at peachtree!!

Did you make the vacuum pump yourself? If not, what did you pull it out of?

Hmm… wonder where they’re going to drill 7lbs worth of holes… :ahh:

I just hope the ball stands that still for you in competition.

Yeah, that was our one concern about tracking the ball down as well as the speed of the arm.
Regarding the ball moving around, we have some pretty skilled drivers and some sonar sensors that we are trying to use to help us with tracking the ball. We feel that it is just an issue of the drivers being able to get it, not the suction onto the ball.
But yeah you are right, we need a ton of practice because we all know with 6 robot and 4 enormous balls nothing is going to be standing still.

AWESOME idea. it definently works but its a little slowish.

Here are two pictures of our turbine. It is a Dirt Devil hand held vacuum modified to fit a Fisher-Price motor with a 1:2 gear ratio. This assembly is attached to a 20" diameter dome. 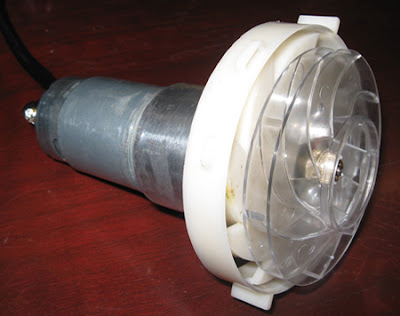 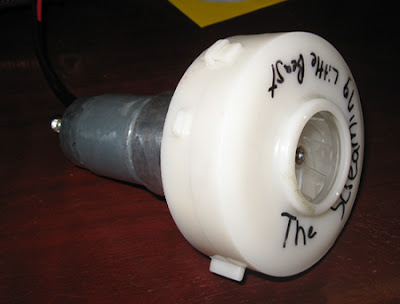 Thats pretty interesting. I wouldn’t have thought to use a hand held vacuum. Ours is slightly bigger and more powerful:cool:

Thats pretty interesting. I wouldn’t have thought to use a hand held vacuum. Ours is slightly bigger and more powerful:cool:

Awesome! How large is your dome? With our 20" dome, our vacuum system produces about 200 lbs. of attachment force. Which should be plenty.

We’re using a 21" funnel. The biggest thing with ours is that we lock onto the ball immediately by just touching it. We dont have to be precise or wait for the vacuum to lock. I think ours was calculated at over 300lbs of force but we are also using 2 fisher price motors and a larger impeller. Either way thats an awesome robot especially for a rookie team.

Wow we discussed this briefly for our team and didn’t think it would work, congratulations.

So did our team, we even built a vacum, but it had no where near the strenght of that one. we decided on a mortor/catapult desighn.