A huge thank you to all of our incredible students, mentors, parents, and sponsors for making this robot possible. 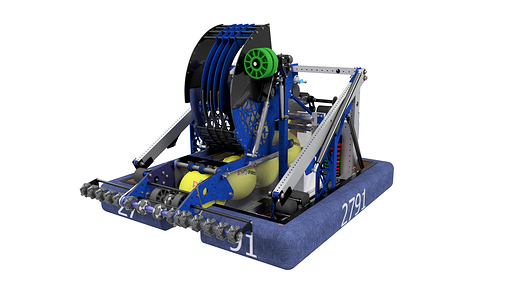 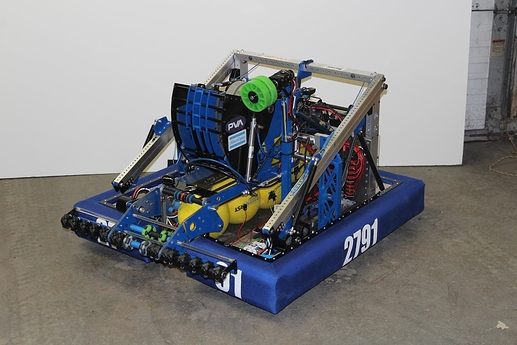 The public CAD can be found here.

That is a pretty spectacular animation

Love the robot and video, especially the music!

Well-organized and thoughtful public documentation? Who are you and what have you done with 2791?

This robot rocks! Here’s the interview breaking down more about 2791’s build season and robot: https://youtu.be/qrf6C6IPsP8

Are the vectored wheels backwards in the CAD on purpose?

I think it’s a great robot. Hopefully you get to play again one day.

In your FUN interview you mentioned that you weren’t happy with your climber. Can you elaborate? Why do you think a telescoping design would have been lighter?

Are the vectores wheels backwards in the CAD on purpose?

Was hoping no one would notice that! No, that was an accident that we caught before we assembled it and I suppose we forgot to fix in the CAD.

I think it’s a great robot. Hopefully you get to play again one day.

In your FUN interview you mentioned that you weren’t happy with your climber. Can you elaborate? Why do you think a telescoping design would have been lighter?

When deciding and prototyping climbers, we were torn between going with a telescoping design and the one we have now. If I recall correctly, we decided to move towards the climber we have now due to packaging & layout reasons as well as the potential for a future active climb, and away from a telescopic design due to its potential complexity (either quite a few stages or a pivot).

Throughout the season, the climber ended up being a major pain and struggle for us. Our method of deployment was messy and sometimes caused inconsistencies in the raising of one or both sides of the arm, and the lining up of the climb was pretty hard.

If we were to do it again, we would definitely go with a telescoping design (and we were looking into it if we were to make champs). We have more experience designing and constructing them, while the current climb is the first time we’ve done something like this. I’m not completely sure that a telescoping design would be lighter but I think it might be close, and we had some weight to spare.

If we were forced to do a similar climber, I would be inclined to do something very similar to 5406 or 111 with a virtual four-bar

Fun fact: the flywheel motor rpm setpoint for the trench shot is 2791 rpm

All made by a freshman

One of a kind

Great robot and incredible animation video!
If you could get more technical regarding the animation; rendering procedure, software and techniques used, etc., that would be awesome.

I made the animation in blender 2.8. Every moving part of the robot was exported as a separate .obj and imported into blender. I suggest organizing parts by each mechanism (ex. climber, hopper, etc), it keeps everything mostly organized while importing. After importing, I would suggest parenting all the objects to something that wouldn’t be the main focus of the animation, typically the drive train. Every object has to be retextured, and it just takes some tweaking around to get it right. I personally don’t like the textures, but I’ll accept it for a first try. I believe I used 1.000 metallic, 0.364 roughness, for the bare metal, and 1.000 metallic, 0.738 specular, and 0.135 roughness for the powder coated parts. Animation is just key framing every movement and rotation of each individual piece. The background was a sky hdri with 2.2 turbidity and 0.3 ground albedo with a strength of 4. I used cycles render with 1024 samples at 1080x1920. It took 2 nights with 10-15 computers with gtx1050s and i5s, 30 hours on a gtx 1080 and i7 8700k, and 10 hours on a gtx 1660ti and i7 9750h to render the animation.

Thanks for the detailed explanation! Keep up the great work

This is not the Shakey robotics I met in 2009…what is going on.

That animation is really really cool. Would love to get a tutorial from your student about how to create one of those!

Will there be a code release?

Awesome! Any idea when?