Some of you might remember me from my recent post regarding the Thomas 215 air compressor, which I was interested in as a result of my interest in, and I quote: “standardizing our electrical and pneumatic systems”.

While decisions have not been reached, or truthfully, even discussed at length, I can say honestly that the information gained from said thread was utile enough to convince me to spend a far longer period of time binging ChiefDelphi, one of a great many symptoms of my ongoing FRC-based addiction.

So here I am, having returned to query the masses of knowledgable Mentors and Alumni yet again, with a slightly different topic this time around. For years Team 3256 has survived without any real part management systems, operating purely within the limits of our own mental constructs, and held together only with the thinnest, weakest strands of sanity we had left, cobbled together from the collective consciousness that is the build season hive mind.

Obviously this did not work incredibly well, with a multitude of problems I had the great pleasure of being able to witness firsthand, as a freshman during the late 2020 season, Infinite Recharge. Part names included, but were not limited to:

And trust me… it gets far worse…

One of my principal goals within the quarantine offseason has since been to alleviate the problem, especially when the assembly of the final robot was delayed by almost two weeks as a result of no record being kept of manufactured parts.

I’m not kidding.
They literally sat around in a box for two weeks, completely unnoticed.

Luckily for us all, the first steps have been taken to alleviate this problem.

As recently as last Friday, prominent team leads were called together for a meeting regarding the possibility of using Notion, or perhaps a self-made Notion clone, as a collaborative workspace and part management system.

I have proceeded to draw up the first prototypes of such a system, and have decided that running it past the (mostly) wise denizens of ChiefDelphi would be a bright idea quite unbefitting of an idiot such as myself.

Ladies and Gentlemen, I present to you: 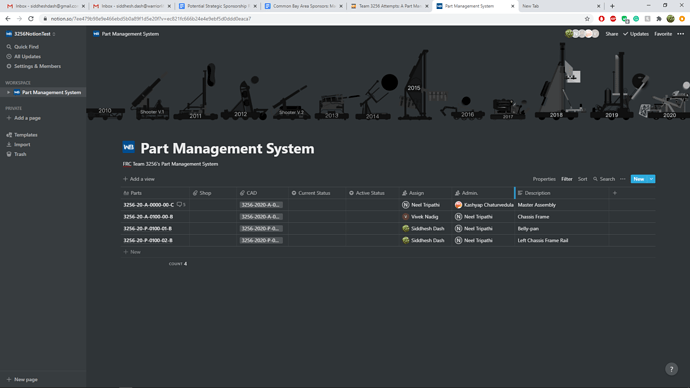 Here’s another thread about Notion, the source from which 4414 planted this idea into my head:

Notion.so is relatively new web service that is sort of like Google Docs/Sheets/Sites/Trello baked into one thing: very flexible, modular. Not as spreadsheets-on-steroids as Airtable is (which also has recent upgrades for EDU address), but really, in my view, can give you flexibility in developing content for the classroom. I haven’t started sketching it out for the team setting, but could be a viable option. Also, trying to understand how you could have multiple people work on it without payin…

Here’s another thread about Cheesy Parts, the Part Management Platform of the Cheesy Poofs, from which I stole the enclosed Part Numbering System:

Cheesy Parts is an open-source web-based system for tracking parts through the design and manufacture cycle. During some of the past seasons, we have had problems losing track of the progress of various parts, or whether we had the raw materials for them. To fix this, we wrote this web-based system during the offseason. It assigns part numbers with which CAD files can be saved to version control and stores information about parts’ current manufacturing status. Features include: Tracking of pa…

Thanks for all of your help and support!

Looks nice. Are there any other reasons that one might choose this over something else?

We just found Google Spreadsheets hard to use, and after a bit of testing, think that Notion, or at least a system that works like Notion would be a good alternative.

As a bonus, we can upload files, which means that our fabrication team doesn’t need to go through GrabCad to find our Prints and G-Code.

We are still polishing out the kinks as it relates to COTS parts and assemblies, and we haven’t decided on a file tree system for our GrabCAD folder yet, but the system itself should work as is.

Thanks for sharing and quoting

I haven’t put additional thought into our own system since my post.

I see benefits in Notion with the relations you can make in the database. Hopefully some of the teams who have used Notion can chime in. I can also see use of the Kanban board view along with calendar for due dates. And this is all on top of the built-in uses of Notion as a knowledge base and starting point for your team, whether externally or internally.

P.S. nice header image with silhouettes from your team’s history!

That header was designed by one of our alumni, and she updates it regularly. Considering that the image seemed to be the rough dimensions of a header, I decided to use it and found that it works quite nicely.

I’ll make sure to update this thread regularly.

A suggestion in regards to file naming, number each subsystem of the robot. So for example Drive 1, Arm 2, Shooter 3, Manipulator 4, etc and then name the parts in cad using that subsystem number as part of their name. So a drive chassis bar could be something along the lines of M1-02-ChassisSideBar. M since its a part for the Mechanical, 1 since it is the drive subsystem, 02 because it is the second part being caded for the system, and then a part name. That way parts you see in your PARTH MANAGEMENT, will make a little more sense at a quick glance.

Thanks for the suggestion!

As of now, we are attempting to use this file naming / part numbering system used by a few other teams including 254, the Cheesy Poofs.

It does have subsystem support in the form of a sub-assembly identifier, as explained in the page linked above.

It does not, however, have sub-team support, although we assumed this wouldn’t be a problem since our different subteams keep all of their files separate.

Whether we do or do not add a subteam identifier is still up for debate, but it seems like more of a burden than a boon to store different file types in the same system anyway.

If anyone has any ideas for dealing with those issues, any more help would be well appreciated!