Here is our shooter! The turret will turn on an axle powered with a winch system (window motor mounted underneath). The turret turns perfectly… I am just concerned that with only one connection point that the turret will be subject to a lot of vibrations and will wobble when the ball goes through. We haven’t fully tested it out yet, but I think it will be something that we need to address. Any suggestions? 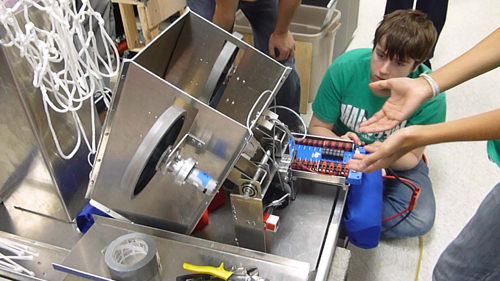 One potential solution would be to add a second winch system to the other end. The shooter would still pivot on a single axle, but would then have a powered winch at each end. One winch would spin clockwise, pulling down on the the hood, while the other gave slack, allowing the hood to tilt. For the hood to stay stationary, both motors would have to stall slightly, each pulling slightly.