Hi CD. We are maybe a little bit late but here’s the 2020 build blog of team 5553, Robo’Lyon from France. First, we would like to thank all the Open Alliance’s teams and all the other teams which decided to communicate the progress of their build season. We’ve been especially inspired by our fellow Europeans from Team Rembrandts 4481. All these teams are a huge source of inspiration for us and all the FRC community. That’s why we’ve thought of doing the same in order to share our advances of the season for everyone who’s interested.

From the beginning of this season, we’ve shared our work and prototypes with our community on Instagram, Facebook and Reddit. However, we’ve never been writing about it on CD, so here we are!

This year priorities are efficiency and timeliness. With the removal of the stop build day, we have a much shorter build period than the other teams. We participate in Los Angeles regional in week 2 but we must send the robot 2 weeks before. That’s why we have to build the robot in 5 weeks instead of 8.

Philosophy for efficiency: everyone must be involved. You can’t afford giving important jobs only to a few students. Two rules flow from this: everyone must clearly know their role and we must trust everyone in the team.

To get prepared for the season, we did a “practice kick-off” two weeks before the real kick-off. The steps were well mastered on D-Day:

Prioritization of our Infinite Recharge objectives

1: Throw balls in the outer port, then in the inner port

2: Grab power cells on the field

3: Store 5 power cells in the robot at the same time

4: Hang on the shield generator

Students are divided into 6 groups of 4. Each group consists of at least one student specializing in CAD and one student specializing in programming. An objective is assigned to each group, the priority objectives are reserved for the most competent groups. Each prototype group can use our CNC and 3D printers. We also follow the agile method, which forces us to iterate.

Even though we put this objective in 5th position, we think that crossing the trench can make a big difference in match. That’s why we chose to design the robot within the limit of 28 inches.

1: Throw balls in the outer port, then in the inner port

Shooter: We first opted for a flywheel. One advantage is that the balloon flies turning on itself: this makes a more precise trajectory. The axis is powered by two 775 Pro.

Adjustable hood: It is powered by a bag. It can control the shooting angle. when retracted we can shoot against the powerport.

Turret: It is also powered by a bag. Two movable plates rotate on either side of the stationary plate thanks to bearings placed between them. A transmission chain drives the outer plates.

2: Grab power cells on the field

Intake: We prototyped the first intake with two lines of 2” AndyMark maroon compliant wheels driven by a 775 Pro. We had to do many tests to find the right distance to the bumpers.

As no mechanism must protrude from the frame perimeter before the match, we must be able to retract the intake. So we decided to rotate it using actuators.

Unfortunately, the first tests were not conclusive: too much pressure + weak points on the intake arms = epic fail

After a lot of tests on the actuators position and a strengthening of the arms, we succeeded. On the video Juliane helps it a little bit… But we limited its strokepract thereafter and everything went better.

3: Store 5 power cells at the same time in the robot

Conveyor: we prototyped a conveyor with a belt system on the outside and rollers on the inside to guide the power cells.

Prototype 1: The power cells were driven by the belts, but they could not stop when the conveyor was full (they continued to enter and crashed to the bottom).

Prototype 2: The belts were replaced by a large elastic and were moved inside. The rollers were moved outside. But the conveyor was too large and did not allow enough balls to be stored.

We are working on a version 3 which will be simpler: the balls are conveyed to the shooter thanks to a slight slope. It has a triangular shape that lets pass only one ball at a time. A wheel placed on the side brings the balls one by one into the feeder.

Feeder: it grabs the balls laterally and put them up into the turret. The two lines of wheels rotate in different directions, so the balls go up without rotating.

Prototype of the feeder, the turret and the shooter together:

4: hang on the shield generator

To get the hook up, we prototyped a telescopic arm and a scissors lifter. We opted for the arm because it’s more compact. It brings the hook on the bar, then it goes down and the robot goes up thanks to a winch. 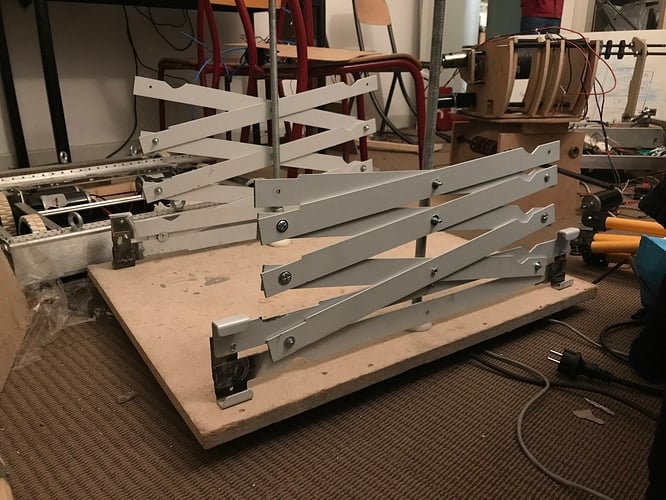 Telescopic arm: The telescopic arm goes up thanks to a cascade rope system. We prototyped it with four metal profiles of different widths, but the ropes rubbed against the profiles. Also, when deployed, the arm leaned due to the gaps between the profiles. That’s why we printed 3D pieces to guide the ropes and to fill the spaces between them. 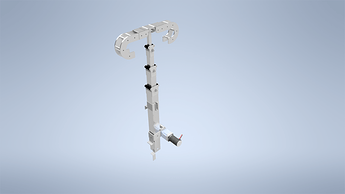 Hook: The hook has two sides to make driving easier: the robot can be positioned on both sides of the scale. The two ends bend when they are placed on the bar. It allows to limit the height of the arm on the robot (and not to exceed 28 inches). It makes easier to place the hook on the bar because the horizontal surface is larger.

Winch: Four ropes are attached to the hook and wrap around the winch. It is powered by two Cims.

Hanging points on the robot: We chose to hang the robot thanks to four attachment points in each corner. It maximizes the stability, which is important not to exceed 12 inches from the frame perimeter.

This is our last version of the entire climber on the robot which is currently being laser cut. 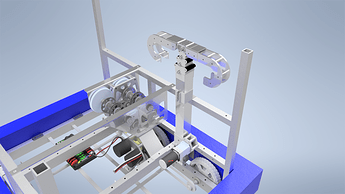 We are late with this project. Prototypes are in progress, but we didn’t have time to test them yet.

All of our mechanisms are now being laser cut and we’re waiting for them. We’ll be happy to hear your thoughts about our work.

That’s a heck of a first post! Lots of interesting info in there. Thank you for having an open build.

Thank you! We’ll make the changes as you said. I found your open build to be awesome!

This is the last render of our robot. There’s only the inside of the conveyor missing. 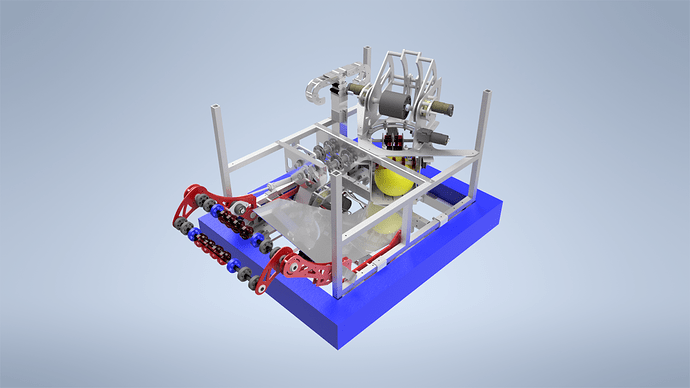 Yes 5 and there is a small incision at the bottom of the intake to pass an eleastic band so that when the intake is retracted power cells can’t get out.

That’s how we’re planning to store our 5 power cells in the robot : 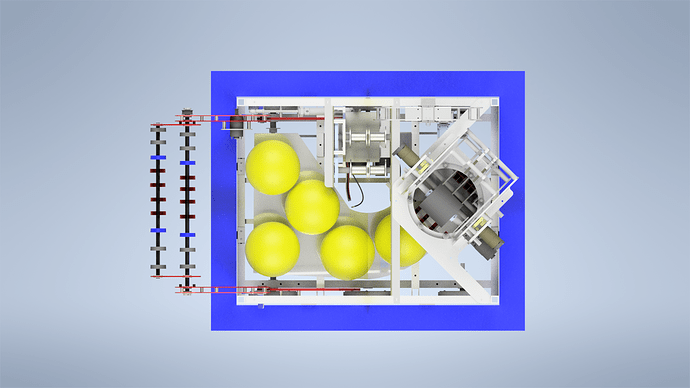 How secure is the hook when it’s on the bar? It seems like the prototype could fall off fairly easily in one direction.

We re-designed our hook as shown on the render but we are still trying different prototypes.

We are also going to put anti-slip material on the hook so that should help a bit.

Wow this is a really great thread. I already saw some good ideas just scrolling through.

That’s a cool idea for shooter adjustment… We are trying to explore something similar. Do you think you could show us some pictures of how yours works?

Thank you ! Our adjustable hood works in a really simple way. It is composed of a hood which rotate around the flywheel axis but which isn’t powered by it. On one side of the axis, we’ve attached a sprocket with a bearing to the hood so that it can freely move around it. This sprocket is powered by a bag with a versaplanetary gearbox. 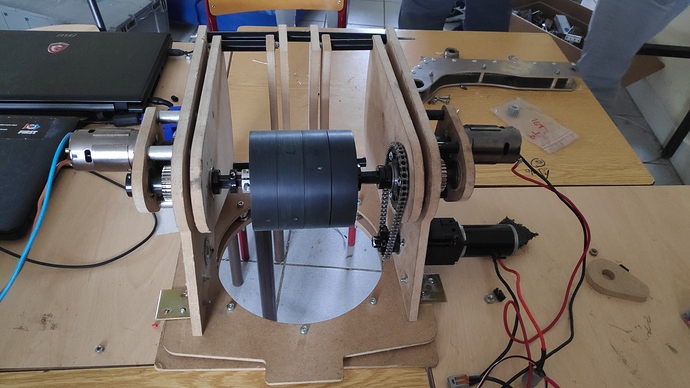 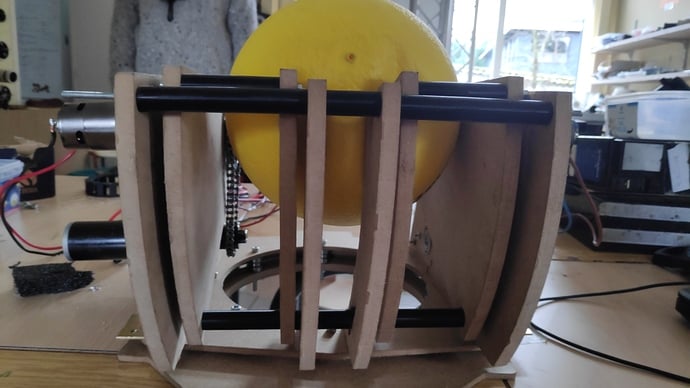 How accurate do you think this hood will be? because youre looking at a relative 7 in arm so the slack in the chain could be a big difference in angle

During the prototyping phase we were quite precise but on our final design we added an encoder and we will take into account the lag due to the chain. Also we added a chain tensioner.

Cool concept with the infinite positions of the shooting cap! Nice that you share your progress during the building season! Is there a reason that the movable part of the shooter is on the inside? It would be more logical for me to place it on the outside so the ball does not hit any obstacles, so that the shots are more acute. Or are you not hindered by this?

Thank you for the interest!
Actually the movable part is level to the fixed part so there isn’t any obstacle to the ball.
I will try to upload a cut view of the shooter to show you. 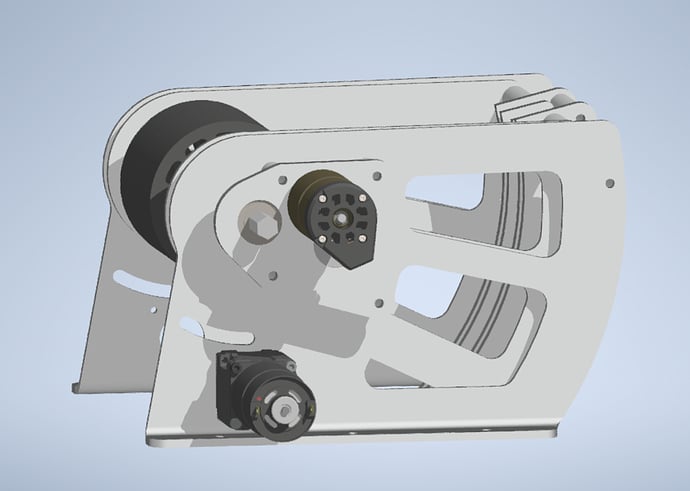 Nice! What’s the gear ratio on each of side of that shooter?