My team is designing a swerve module this offseason for use (hopefully) during the 2020 season, and this is the first iteration we’ve come up with. We wanted it to be compact, reasonably lightweight, robust, and integrate easily with a 2x1 chassis frame, while not sacrificing any power. The design was pretty heavily inspired by 33 and 2910’s modules. Most of the parts will be 3D printed on a Markforged printer.

The design still isn’t completely finished, (still needs nuts and bolts; and the plates/pulleys need to be pocketed). Please feel free to leave any suggestions. 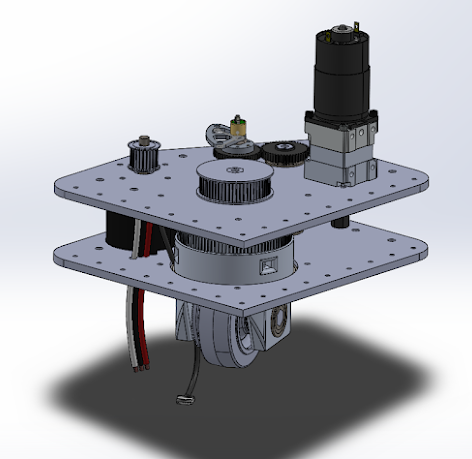 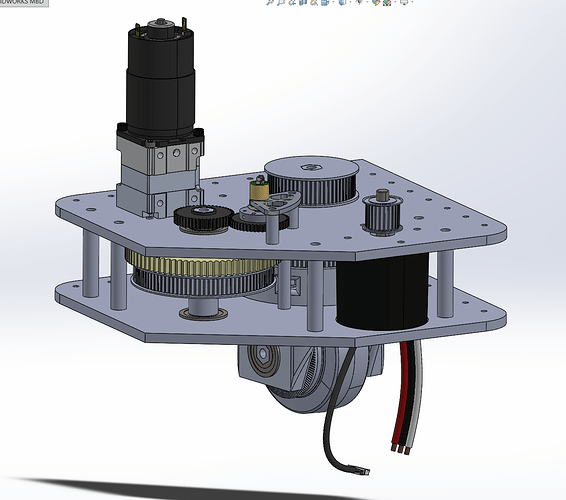 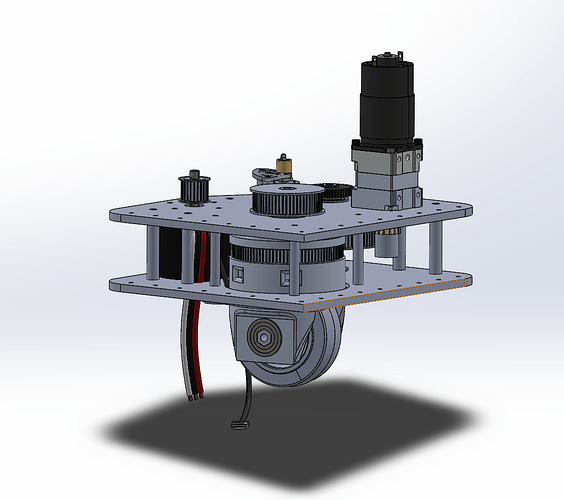 I love 694 but I’m fairly confident that a swerve drive is not the difference between StuyPulse and a world class powerhouse. DM me if you’d like to chat more.

Mostly curious why you opted to use a 775pro for steering instead of a NEO given your willingness to already use one for propulsion. It allows for less weight, reduces the need for a VP (can go to purely belt / gear reduction, etc.) In addition, it may allow you to drop the encoder assembly if you are comfortable with the NEO encoder resolution. Otherwise you can likely package it differently to put it on the space interior to the plate.

Other than those preliminary gripes, it’s a good first attempt for a swerve

We mostly chose a 775 over a NEO because it was easier to integrate an encoder geared 1:1 with the module’s azimuth and because we thought it would simplify the design. A 775 is also easier to implement PID control on. We’ll probably end up considering a NEO for future iterations though.

We initially used 775’s for our swerve drive in Palmetto, but the power draw was insane. It may have also been an issue with the swerves mechanically, but we had to switch to BAG motors for the azimuth after the competition.

If we do go with 775s on our swerve, we’ll probably end up implementing some kind of current limiting so they don’t explode. BAG motors are a consideration though.

On my teams swerve we use a NEO for propulsion and a banebot rs550 for azimuth. The extra ring gear in the planetary gearbox does make it taller, (we put it through a 100:1 reduction) but it saves weight and has never served us wrong. I would suggest taking a look at the CAD for our swerve here: https://grabcad.com/library/4004-swerve-2