Team 7461, Binary Circles, is proud to release our 2019 season documentation! This documentation played a key role in getting us Rookie All-Star at District Championships, and by releasing it we hope it will serve as a good example for other teams, to help them develop high-quality documents.

Brand Standards: https://drive.google.com/file/d/1Nth7xhLh9hUBNEIIHYCqjfliJei8AIgo/view?usp=sharing
These serve as a guide for all of our team materials, and help ensure all of our documents are professional and well-done. 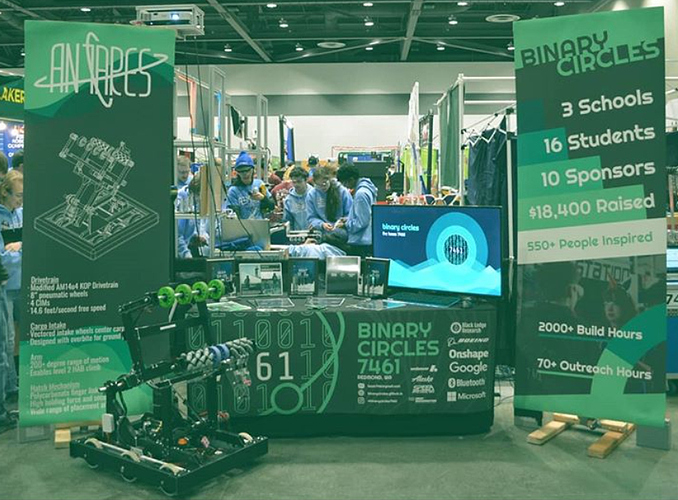 Feel free to ask me or @buildupon any questions you may have about our documentation!

You guys have all this put together as rookies? This is amazing. Not only do you have a branding document, but you’ve clearly demonstrated that you’re actually following it. The robot looks killer as well. There is always an opening for a robot that inteligently picks and chooses a more limited strategy, and carries it out effectively. That demonstrates a lot of maturity in your kickoff and design process. Looking at that business plan, it seems that you’ve got an illustrious future ahead of you. Congrats on a sucessful rookie season, and good luck in 2020!

Wow…
This is incredible…

I wish my team had this as rookies…

Thank you! Our robot looked a lot better when it wasn’t moving

This tech binder is on par with some of the higher level tech binders I’ve seen. I’m sure the rest of the documentation is equally great.

Look forward to a few technical awards in the future, on top of blue banners.

All of our sponsors are listed in our business plan, on page 6, but our biggest ones are Black Lodge Research(the local makerspace we worked out of), Microsoft, Boeing, Google, and Bluetooth.

Woah… You guys did some serious work. Great job.

Literally every team has had a year where they were stationary more often than not (except for 4414). It’s disheartening, but I wouldn’t sweat it for long. If you guys are half as organized as you look, you’ve probably already had a “plus-delta” type meeting to figure out what went wrong, and what mistakes to avoid in the future.

“A couple small companies, you wouldn’t have heard of them”

“A couple small companies, you wouldn’t have heard of them”

Who even are they?

Wow. I’m very jealous of how well put together your team is in such a short time. Keep it up

Have only seen the brand document before, now that i see the rest of your documemtation, pretty great implementation! Hope to see more in the future

Yeah we had quite the recap meeting after the season ended

Hi, I’m the Scouting Mentor for CPR, Team 3663. I was at the Team 4911 Robot Reveal event on 2/15/2020 where 12 teams revealed their robot, including yours. I wanted to chime in to say that I was very impressed with your strategic thinking and creative problem-solving in building a robot with limited resources. I have rarely seen a team have such a well-thought out approach for making a competitive robot when they are not able to “do it all.” Your student presenter was very articulate and impressive. I’m looking forward to watching you compete. I think all of the teams at the Reveal would be happy to help you with materials and resources if you need any. Good luck at competition!

Hey! Thank you so much for the offer of help! We might need that in the coming weeks. I really liked how you were able to package your robot into such a tight space. Good luck to you as well!