The regional system sucks, kind of. Yes, it’s very cool to have large arenas and several days in a row of play time, but shorter events and lower costs are clearly easier on students and their parents. I just watched New England Champs and it was jaw dropping, the quality of play that arose from the point-based system. Perhaps less importantly, though currently my largest gripe about regionals, is the perrenial crap shoot for championship qualifying, in which really good teams miss out due to flukes, and everyone else just hopes to be the lucky second pick of the dominant alliance, or to get the wildcard. 4944 and 2240 clearly were deserving of trips to Houston this year, as an example from my own region.

Some of us are grumbling and wondering, what would it take for us to be able to go to the district model? What is the threshold minimum number of teams? How closely spaced geographically must they all be?

I think the best answer to your question is Indiana. Indiana has very tight champs qualification competition on points, and is the district with the fewest teams and district events right now (57 indiana teams competed at 3 district events in 2019.)

For the question of how closely spaced geographically must they all be, this map might help. 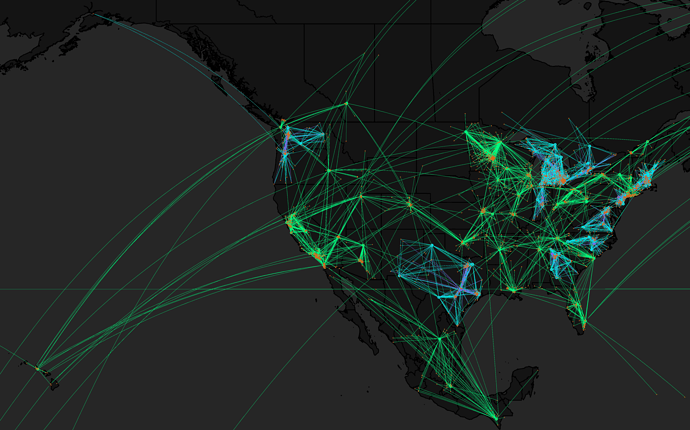 Nice map! Is that all of the team locations connected to where they played this year???

Yep, I could do the world but teams outside of north america have unreliable locations

It’s a wonderful visualization. I’ve never seen it presented that way before. What did you use to make the map?

Looks like my region would be about the least likely to go to districts, based on that map. The Rocky Mountain West is pretty not-dense. Ugh

yeah, Idaho, Utah, and Colorado are rather sparse, and far apart. Arizona/Nevada looks more likely. And even that would be tough to do.

The hot spots I see are basically the ones that are already being talked about. In no particular order:

FIRST really needs to address the imbalance in event choice between the regional and district models. District teams may play out of their own district, and even at a regional events if space is available. Regional teams may only play at regionals.

I can see areas like Colorado being very limited in event choice if more areas transition to districts without them.

Some of us are grumbling and wondering, what would it take for us to be able to go to the district model? What is the threshold minimum number of teams? How closely spaced geographically must they all be?

IMO, districts would work much better than the current system in a combined Mountain region of Colorado, Utah, Idaho, Montana and Wyoming.

There are 86 teams in those states. They currently attend 118 events spread over 12 regional events. Primarily Colorado Regional (44), Utah (34) and Idaho (15). 85 of 86 teams attended at least one of those three events.

So 86 teams would require 5 ~40 team district events or better yet 6 ~30 team events. These of course can be in high school gyms and are a lot cheaper to run. And then one championship which could rotate between one of the current regional locations.

After just a few years, what most districts have found is that due to the reduced travel costs, more high schools will start teams, giving you a nice upward spiral in growth.

This issue seems like something that was pushed off until later when there weren’t many districts, but needs to be addressed sometime soon.

What do people think of a universal qualification point system?

I guess you need to be able to organize at least two events and a district championship.
Teams must also be able and willing to travel to two events plus DCMP, and travel and lodging costs must not become a burded for teams that now have to travel 3 times, plus Worlds potentially.

In New England, we had several events that had 5 to 10 open spaces.

This would have been a good opportunity to open up a few (not necessarily all) spaces to teams not from a district.

Especially with New York so close, it would have benefited everyone. And I miss seeing teams from Brazil, Europe, Israel etc.

You do not need to have a DCMP to run a district.

Ah! OK. Thanks for the correction. I thought a DCMP was necessary. I guess, then, that this decision is taken at the district level.

You do not need to have a DCMP to run a district.

Source? The manual heavily implies that you must go through DCMP to qualify for CMP.

Edit: The District Planning Guide also implies you must have a DCMP.

There’s no current example of a district without a DCMP, as far as I know. Trying to set one up would be venturing into uncharted territory. Not to say that it can’t be done, but it wouldn’t be the district system as we know it.

While §12.9.2 only mentions DCMPs to say that DCMP winners get an automatic invite to CMP, it’s suggested in multiple other places in the manual that the standard progression for district teams is District Event -> DCMP -> CMP. Changing this would require some substantial manual rewrites.