Last night, Northern California mentors received the following email from one of our Regional Directors:

Thank you all for your work and dedication to growing future technologists and gracious leaders in the San Francisco and Monterey Bay Areas. It has been my absolute pleasure serving with you for the past 6 seasons. Unfortunately, it’s time for me to move on from FIRST at the end of this month, but I look forward to my next role volunteering along side you. So this is not a goodbye, it’s see you next season!

In the meantime while my position is being filled, your primary contact is Janet McKinley, FIRST Regional Director in Sacramento for nearly 9 years. Also, you can reach out anytime to Lonny Weissman, FIRST Senior Mentor and team mentor for over 20 years. You are truly in great hands!

Theresa has been a powerful force in the northern California region, advocating for our teams and doing everything in her power to create the best team experience she could provide. In one of my first conversations with her, she told me “[the teams] are our customers, and above all else it is our responsibility to provide the best product we can to them”.

Theresa made sure every event she ran was focused on the team experience. It was no coincidence her events consistently filled up first. At competitions, Theresa led by example. She has been the only regional director I’ve met who is down in the trenches, working every event she’s at with the rest of the volunteers. From field setup to safety glasses attendant, I can’t think of any non-KV role she hasn’t taken on. It was always reassuring knowing that there was someone at the competitions advocating for every team and volunteer there.

Theresa’s support of teams didn’t stop at her high quality competitions - she took care of her teams. Every team, rookie to veteran, had a personal relationship with her, and she took it upon herself to put extra care into newer and lower resource teams, including taking her own time to check in on teams during the season to make sure they were on track. She worked tirelessly to coordinate the regional registration requirements of almost every team in northern California, putting in the legwork to coordinate competition swaps between teams who could do so to ensure that everyone could compete at a place that fit their needs. Rumor even has it that when Theresa went into overdrive and fundraised a surplus of funds for her regionals, she secretly took it upon herself to ensure extra funds were redistributed to teams in the form of an anonymous sponsor grant that helped many local teams this past season.

Theresa is someone who “gets it”, and whose passion for this program and its teams has shone through her work in everything she’s done. What inspires me most is that, despite her departure from employment at FIRST, she has expressed enthusiasm for continuing her involvement in the program, now as a registered volunteer, and will return to her place alongside the teams and volunteers she has spent the past 6 years with this up coming offseason.

I invite people to share their experiences with Theresa, and to join me in thanking her for her tremendous service to every student, mentor, and volunteer she has impacted as our FIRST California Regional Director.

Theresa’s unwavering support for the 841 Biomechs enabled us to launch the SFR East Bay Kickoffs together, starting in 2018 at SunPower and moving to Richmond High the following year. I was the one recognized for that work at SFR this year, and I thanked Luciano and the Biomechs on the mic, but it would have been impossible to succeed the way we have without her pushing the events forward with us and trusting a first-time showrunner to succeed back in 2018.

Her number one priority has been enabling her teams to succeed - and that was all of us, every single unique flower of a team organization.

What I appreciate most is one of her favorite methods was to just connect teams to each other at the right times with the right questions - she made it very easy to be a gracious professional!

Whoever is next will have some big shoes to fill.

Theresa is someone who “gets it”

No better description than this.

Being a Program Delivery Partner for FIRST – or an event organizer of any kind – is a thankless job. For every one compliment, it’s 10 complaints. For every hour of work they are compensated, it’s dozens more they put in. To do it successfully for years is a remarkable feat. Doing it, and then taking on even more responsibilities, fundraising more than is required, and everything else Theresa does is next level.

Whoever is next will have some big shoes to fill.

This, so much this. The Bay Area is known for running among the smoothest events in the state and having better than average team sustainability. I’m confident with the solid foundation that the region is in good hands, but it certainly won’t be easy.

Theresa has been an incredible Regional Director! She has really helped my dad’s team, 8048, make connections and find sponsors/support. She was incredible in the role.

I wish her the best in all her future endeavors, and look forward to seeing her at upcoming events.

Thanks for everything Theresa!

Right after FIRST changed the age requirements to volunteer I was pretty devastated. I had been an FTAA or scorekeeper at all of the Northern California offseasons my sophomore and junior years of high school and was looking to step up and fill one of the roles at an official event.

Theresa was incredibly approachable, kind, and worked with the VCs to assign me as an FTAA at San Francisco and Silicon Valley that year. Keep in mind I was 17, and still in high school. Sure most RDs would have laughed at me and said to wait until college. Theresa didn’t. Still incredibly grateful for the experience all these years later. 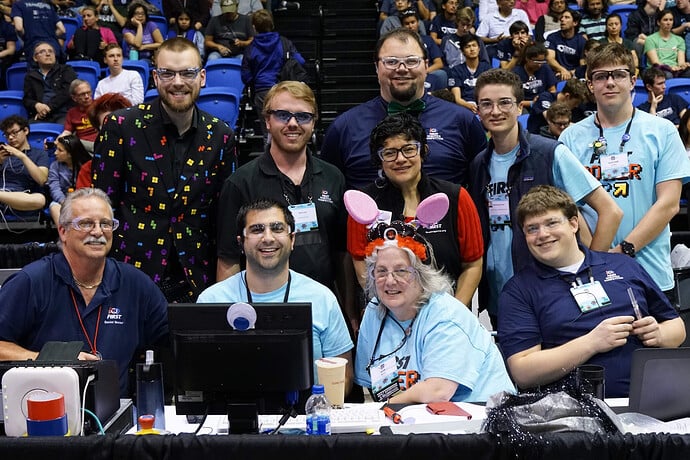 Theresa Bateman helped team 5700 the SOTA Cyberdragons get thousands of dollars worth of grants, and connected us to several mentors. She was always extremely friendly and accessible.
I am grateful for everything Theresa Bateman has done for 5700 and the SF Bay area as a whole.

I was really sad I didn’t get to catch up with Theresa at Championships, she’s been a great friend and colleague for the 6 years she’s been at it, I will miss her from across the world.

Theresa was unbelievably supportive and helpful when my family was starting 8033 Highlander Robotics. She answered probably hundreds of questions. She was always so gracious. 8033 would not have happened without her support. Thank you Theresa!

Theresa is someone who “gets it”

This 100%
Theresa always put in everything to run a great event and give teams a great experience. She will be missed as a Regional Director. But I look forward to working with her a Volunteer.

In addition to running events, Theresa has hooked us up with so many outreach opportunities over the years, and she has always been more than supportive. It’s been a pleasure working with her and she has been a tremendous help to 2813.

I’ve had the privilege to work with Theresa for her entire time as RD, literally meeting her outside the judging room at Chezy Champs, when she was looking for Jim Beck, who was to interview her for the role.

I recognize so much of what others have already said, she’s fantastic at finding money for teams and events, starting teams, supporting teams, and just running a really good event. But I think what really stands out to me is how she–in the most active sense of the word–values the people she sees making the community great. Volunteers, mentors, sponsors, students, everybody.

RDs, much like some of the more-visible Key Volunteers, are given a set of rules, guidelines, and advice that amount to a delicate balancing act to put on the best event they really can. I remember when the volunteer age guidance came out, as @ndp mentioned, quite well. I don’t think there was ever a question in her mind, of course she would go to bat for great volunteers who were highly-qualified but for being a bit young. Theresa has always been full of creative and innovative ways to do the right thing for teams, volunteers, the California FIRST community, and I’m really glad we’ll still have her around as a volunteer.

I remember when Jim stepped back, considering what a great RD he had been, what a legacy he’d built, feeling trepidation about where things might go from there. And here we are years later, Theresa has honored that legacy, stood on the shoulders of giants, and built an even greater foundation from which to build. This time, the feeling is more of cautious optimism for what is yet to come.

Thank you, Theresa, now it’s our turn to honor and recognize you.

I agree with everything everyone else has already said, and I’d add that she’s also been a huge supporter of the off season workshops and competitions, she’s had the teams and students best interest in mind and been an awesome RD for our region! Thank you Theresa!

To add on to what everyone’s already said, Theresa was instrumental in keeping FIRST going in the Bay throughout lockdown. She created opportunities for teams to display their 2021 season work, including a mock judging panel for the Innovation Challenge and Game Design Challenge, and supporting the Product Development workshops. She’s also been absolutely amazing at coordinating with sponsors to get more involvement with FIRST going. She’s been an awesome RD and an inspiration to students, mentors, and the community as a whole!

Thanks for everything Theresa

Theresa Bateman is the reason 6814 still exists. I remember being an anxious sophomore in high school trying to get a new team off the ground. She bent over backwards in 2018 to help us get to a second event, and then again in 2019 when we had something that prevented us from attending the event we were scheduled for. She is infallibly kind, helpful, and passionate about the teams and students who come through the Bay. I’ve never had a negative interaction with her, and I am hugely grateful for how much energy she puts into this program. I wish the best for her going forward!

Sad to hear this, Theresa connected me with System Overload back in 2018, rejoiced and encouraged us when we were a very wild-card team at Monterey in 2019, and found us an awesome technical mentor when we needed programming help early last year. Those are just the highlights, I know there’s a lot more she’s done for our team.

Also echoing the comments about Theresa as a person, she exemplifies the very best of gracious professionalism. Theresa, many thanks for all you’ve done for the FIRST community as Bay Area Regional Director!