This happened to us at Kingsford

I saw that on instagram and showed it to my mentors and teammates, they were very concerned

We got 2 power cells stuck in the shooter and when we spun the wheel to spit them out, it melted to the wheel. When I told the field reset guy. He said “hold on. I want to get a video of you peeling it”

Something similar happened to me once in 2019 when I was field reset at Bloomfield Girls. 2337 broke (literally cracked) a hatch, and I got a photo of it. Also got a ton of photos of Big Bang semifinal 1-2.

Could you post the photo of the cracked hatch? I drove one full speed into the cargo ship and it laughed at me, how did they manage to crack it?

Pretty sure we scored a hatch so hard once it ended up in the cargo ship. I can’t imagine breaking one.

Yeah, that was fun 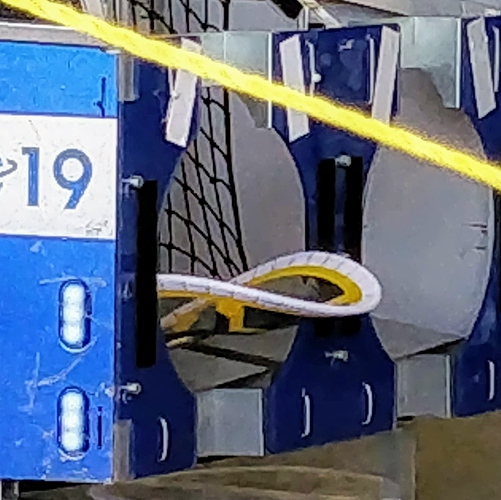 That sure is touch it, own it.

Would that count for 2 pts?

During one of our matches at CNY, I’m not certain if it was quals or practice but i drove into one and bent it

I don’t think so. It isn’t supported via the hook and loop tape.

I mean, the loop tape along the edge of the hatch is the only point of contact/support with the cargo ship, so, maybe?

Ok so in actually finding and looking at the pic, I realized it’s not any old hatch, but a null hatch panel: 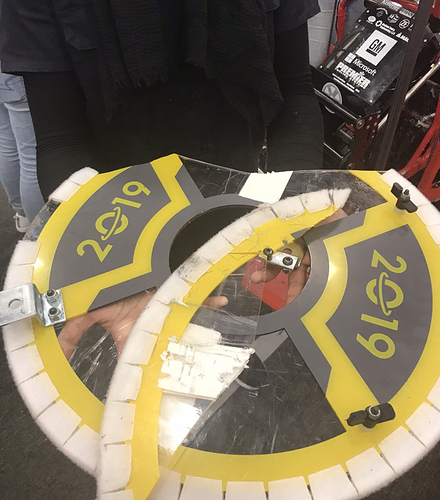 As for how it broke, I honestly don’t remember. It was 5 months ago and so much happened that day I can’t remember

That’s impressive, next i want to see a flattened control panel.

As for how it broke, I honestly don’t remember

I’d bet on the crack starting at the clip attachment point, possibly during drilling. Then a robot hit hard and BAM!

Is this the one scenario polycarb cracks in?

There’s more than one scenario… (LN2 is another, for example–though I haven’t tried that, I’m pretty sure it’ll shatter!)

I took a closer look at the photo. Here’s my general analysis for y’all to follow. (Note: I ran through this much shorter and faster in my head. Some elaboration included.) Also, if you get a chance to take a materials science course, and/or a failure analysis course, do it. It’ll be worth it.

BTW, I suspect a brittle failure mode instead of a ductile one. Brittle shatters, ductile tears. But brittle takes more energy to trigger initially.

Polycarb cracks if you put locktite on the bolts. We made that mistake once. Whole intake piece destroyed.

I remember back during build season we decided to see just how fast we could get the shooter to go. The balls all hit the ceiling and I think we ended up melting the little plastic connectors on the gearbox.

LN2 near an FRC field? Hah. Very funny. In sufficient quantity to to a Hatch Panel? I must be a jester. That’s out.

Well, I have seen liquid nitrogen in the venue at several New England events, used for making ice cream which is sold (I think as a fundraiser for the event). But it’s generally out in the lobby, not in the same room as the field.