I don’t know if any of you read XKCD but one day I stumbled upon this lovely strip. http://imgs.xkcd.com/comics/tape_measure.png](http://xkcd.com/284/)
Now I can’t speak for anyone else but every time I find myself with a tape measure and free time I can’t help but try this out on my own and have seen many other people try it too. One day for a homework assignment I had to gather information on a sport that hadn’t reached a wide audience and my mind returned to this. Imagine my surprise when I realized I could not find a single trace of such a competition ever being held or at least recorded.

Not to be discouraged I have decided that the time has come. It is time to host the first official Tape Measure Olympics! This is not a one man project though. That is why I have come to you my fellow FIRST members to request your assistance. Any help you can give will be welcomed. Some things we will need to achieve are:

With help we can get this done. We can make this great. Please if you are willing to help or have any suggestions please post or send a quick email to tapeolympics@gmail.com

(Alright, maybe it wasn’t quite the same…)

I once had an idea for a two man typing competition. Think of it like a three legged race. One person types with their left. The other types with their right. All on the same keyboard. That would be very hard but really fun at the same time.

Well, if this is in Indiana…I’ll be interested. But I can’t really help outside of that range.

I am not sure I really see the connection other than both use tape measures. I think this shall work though. Already a start is being made on creating the website.

I am not sure I really see the connection other than both use tape measures.

Back in 2002, you got bonus points for your robot touching the ground inside a certain area. The problem was, you got more points for having said robot in a different area, half the field away. Many teams used a “tether” device. Tape measures weren’t legal for use… until Week 1 events, when a number of teams showed up with tape measures that were powered outwards by a motor. At that point, FIRST effectively gave up enforcing the rule (I forget if it was changed or not) and allowed tape measures. So, towards the end of each match, you saw tape measures extending out of robots along the floor. Guess what the competition you’re proposing is? Extending tape measures.

Ok so we got a couple website people. Anyone interested in helping me tackle the marketing side? The plan is to try to get some hardware stores to provide some tape measures and if possible maybe food. Anyone up to the challenge?

I think we maxed out a 25 foot tape measure. 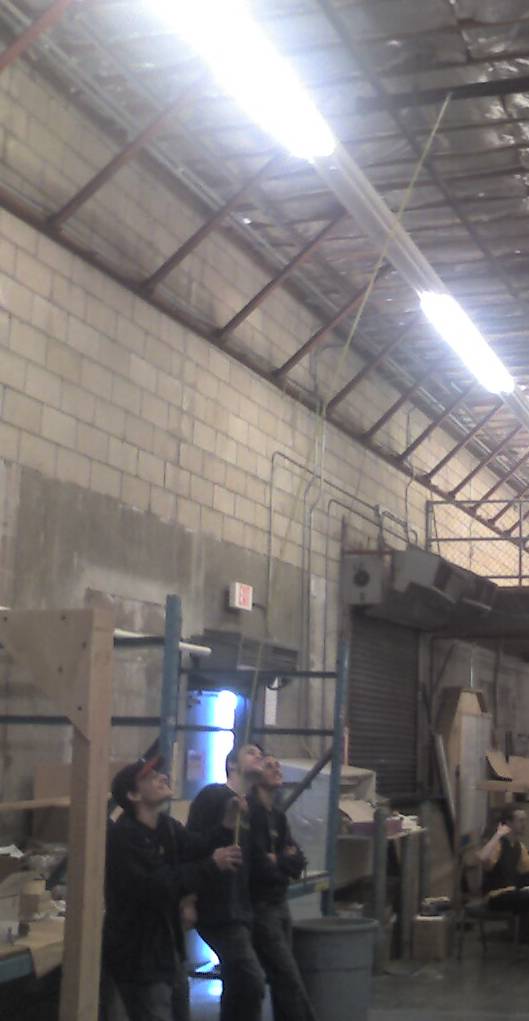 I think we maxed out a 25 foot tape measure.

Impressive, sure, but the point is to get length, not height :). Your 25 foot tape measure only extends 3-4 feet in front of you (judging from the picture).

Impressive, sure, but the point is to get length, not height.

Not specified in the rules.

Which is a good point. A solid set of rules still needs to be put on paper. Currently the idea is that there will be two main challenges. A horizontal challenge to see how much distance you can get the tape measure to cover and a vertical challenge that would be judged by however many feet of tape is extended. Each challenge would also likely be broken down into two classes a standard class using regulation tape measures and an unlimited class for those who believe that one brand is superior or who are willing to modify them in order to try to improve the distance.

There would also be several other smaller events. One such event would be tape measure races which would involve connecting one end of a 100ft measuring tape and realing it out and having a person on a wheeled chair hold the other end and try to reel themselves in. I am curious as to what other events people can think of.

As a thought on the rules. I can foresee somebody raising it to the max as seen in the pic and slinging down for max distance. There should be something to stop this. Such as, “the angle of the tape measure with respect to the ground must always be less then 45 degrees”. Not sure 45 is the right number and the precision would be impossible to measure but it would at least get rid of the obvious outliers.

That’s a good idea, perhaps put bit of weight on the end to add to the challenge.

That extension (in the photo) could have been held for a while.

When getting it up that high, slow and steady is the way to go. Once your up that high, it’s not too difficult to hold in place. The hard part is continuing - being able to pull out more tape without disturbing what you are balancing up above. Especially when everyone around you is laughing and making you laugh.

There actually comes a point when you can no longer just let the tape bend away from you. You have to actually counter-balance it, meaning it points towards you and bends over you, before bending away from you. So if this period is my hand/arm —> . and this is the tape measure —> ( it would look something like this —> .( coming toward me first, and then bending away.

Furthest reach horizontally that can be held essentially motionless for 3 seconds.

Note that some brands and styles of tape measure are far superior to others, so to be fair it would have to be all the same tape measure - even different specimens of supposedly identical items have some variability.

That is why there would be the two classes. I think for time purposes we will just have to go with the same brand. Getting a hold of the right number of tape measures could be a problem.