Um, no, you didn’t. Eugenia Gabrielov holds prior art. 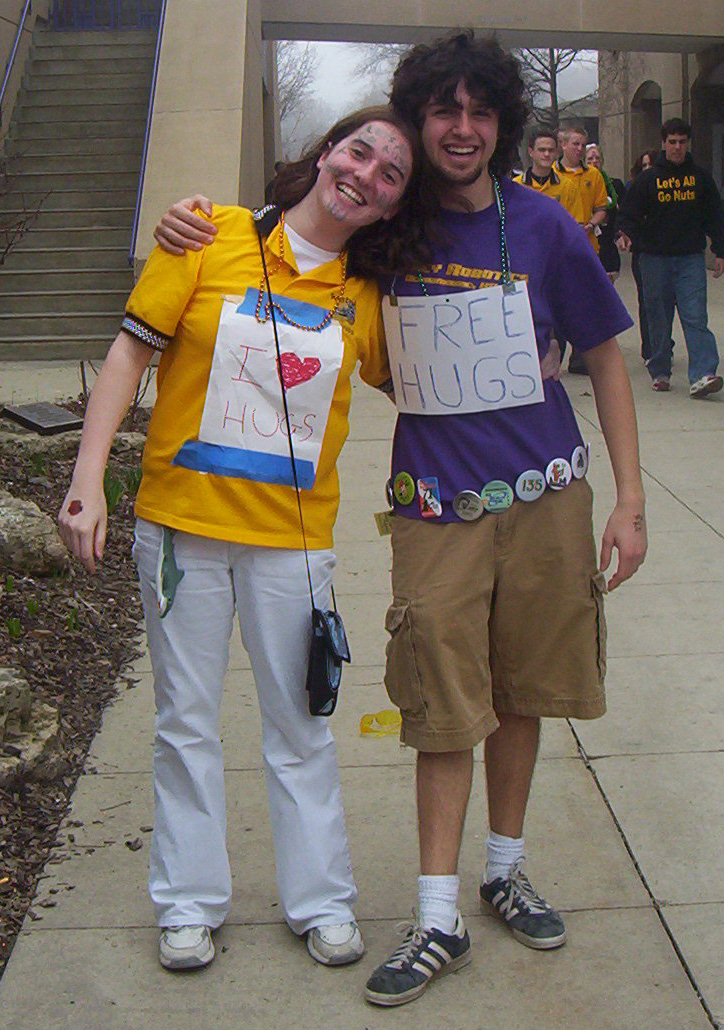 One of the more creative ways of obtaining buttons from the other teams 😉 I know there was at least one more guy “handing-out” free hugs but I never managed to get a shot of him!

That picture is from regionals, and I know she probably started again the minute she got to Atlanta. Nice try, though.

Thats very true, the free hug thing got preety big last year. I remember doing it in Houston in 2003 in the Homer head but it wasn’t as big back then.

I don’t even hold claim to hugs. Free Hugs were around wayyyy wayyy before me. I just continued the tradition with renewed exburance, and of course…the Short Person touch.

We look forward to you joining us in a frolic beyond belief.

No matter how many people lay claim to these FIRST trends, we’ll never know who “really” started them

PS: When I was a freshman (2001) there were people giving out ‘free hugs’ at competitions.

i cant really claim i was the first to do it at a robotics competition, since this is only my second year on a robotics team, but i remember at middle school grad nite a bunch of my friends and i ran around sea world asking people for hugs and trying to keep a tally of who could get the most hugs in one night…

but yeah, as always, i offer free hugs, not just at competitions, but anywhere really. you’ve just gotta ask

I guess this must be a nationals ‘thang’ cuz for the last three years and 5 regionals, I haven’t seen anyone offering free hugs. I feel left out…

Last year a teammate and I both had the free hugs signs at the regionals. (thats actually how i met Genia!). I also know that i had the sign at IRI 2003. and I am pretty sure that my team was doing it all throughout 2003 and 2002. (and you know were not gonna stop now!)
andrew-I look forward to hugging you- morrison

Um, no, you didn’t. Eugenia Gabrielov holds prior art.

That picture is from regionals, and I know she probably started again the minute she got to Atlanta. Nice try, though.

and brian rojas, the guy next to her!

I was there with a free hugs sign too! I had stayed up all night making it

Heres my one of my signs.
http://www.chiefdelphi.com/forums/showthread.php?t=29536&highlight=free+hugs

Well, I personally don’t think ANYONE should claim free hugs.

Hugs make the world go round! And if people didn’t hug one another, then there would be a lot of sad people. I’ve read in books that in order for someone to be completely happy, they have to recieve at least 12 hugs a day.

So thank you, free hug givers (esp. Paul), for making the world a brighter and healthier place!

hugs are cool, but this should probobly be in chit chat

what happend in regionals last year???

Man, I remember free hugs from 6 years ago. I don’t remember HEEEEY until 3 years after that. I remember starting that HEEEY thing amongst my team (not taking credit from all of FIRST, but I was the first to do it on my team, I’m pretty sure :)) Those were good times. Going around the lazy river with everyone yelling HEEEEY and a bunch of old people looking at you a bit funny. Wait. 6 years ago? Holy crap. Personally, I don’t think anyone actually ‘started’ these things. There were lots of contributors… but free hugs and HEEEY is only around because a whole bunch of people started the effort. It’s a tradition that can’t die

wow… I’ve never been to a First comp but i’ve been to anime conventions where people have had “free hug” signs O.o that could be where it’s from.

Yeah we did free hugs in 2003 at all the regionals. It wasn’t a huge hit, but we did it anyways. 2002 IRI is where it really kicked in. After that, everybody started doing it. When we saw people doing it in Atlanta, we knew we did it waaaaaay before you guys (NoUseForAName). And yet, I heard stories from like 2001 of people doing free hugs, so we are merely walking in the footsteps of our forefathers.

I remember “Heyyyy” going on back at Nationals in 2002, my freshman year. After that it kind of died out and I haven’t really noticed it since.

Heyyyyyy has not died yet, in 03 at the team party that was all you could hear all night, I remember the heyyyy thread, it only lasted about 5 posts. I wont let heyyyy die.

I think 2002 was the biggest HEEEY year for Nats. I know my entire group of friends would just yell HEEEY at the sight of anything that even looked like a fellow firster

I’m not sure if my team got into it that big any other year.